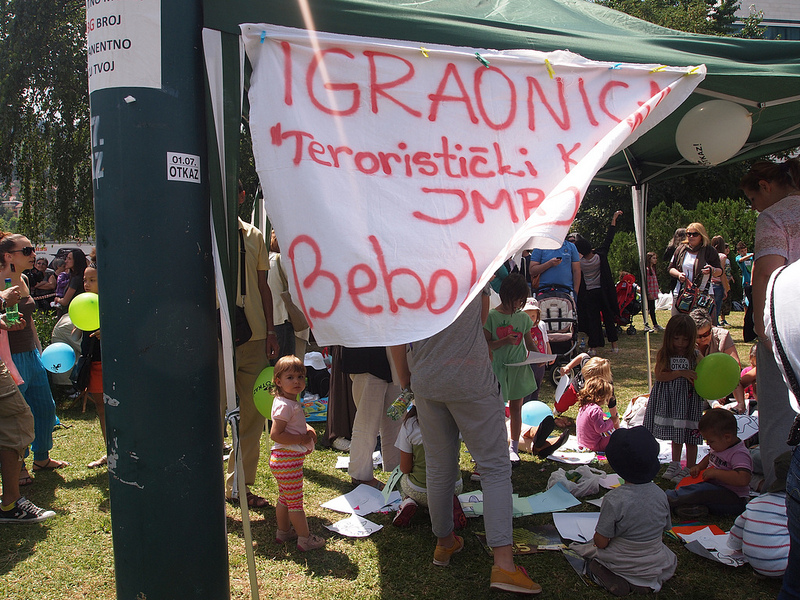 A month after the beginning of the protests, the 'bebolucija' already seems to have betrayed its original intentions. Low interest of citizenship, confusion of the protesters, weaknesses of the organization: the Bosnian spring is postponed to a date to be determined

Monday, July 1st. About a thousand people are in front of the parliament in Sarajevo. Some wile away the time with football, some with volleyball, some brought their children to play in an ironic "training ground for terrorists" for under five, improvised in Trg Bosne i Hercegovine. With the silence of the last two weeks, the atmosphere has eased down and is much more relaxed. Almost apathetic.

Among the few actually combative groups, there are half a dozen activists of the Anti-Dayton group. Flags with the symbol of Kotromanić in sight, they are here "to reaffirm the illegality of the Dayton Agreement that stole our country", says Ibrahim Halilović, the most decided in the group. Ibrahim worked on television in Sarajevo before the war, then was forced to flee to Canada. "I'll stay here, because we were all betrayed. I'll keep waving this flag, because politicians are afraid of it". Behind him, on the barricades erected to protect the building, a banner reads: “Long live the Republic of Bosnia and Herzegovina”. Speakers transmit songs by Zabranjeno Pušenje. The crowd peacefully occupies the road, which will remain closed until six in the afternoon.

There are groups of people from all over the country, from Mostar to Banja Luka. But the impression is that something has changed compared to the first protests, that had raised a lot of hope in the possibility of a long-awaited “Bosnian spring”.

Last week, many comments in the press have actually talked about a "degeneration" of the bebolucija: the 'revolt' would have become the preserve of small groups and taken an identity, pro-Bosniak turn. The first criticism in order of time was by Almir Pjaneta, published in Slobodna Bosna with the title: "The Bebolucija is over". According to Pjaneta, the low participation in the protest of last Monday ended up favouring marginal formations, and namely Bosniak nationalists, who took control of the event altering its nature. "The worst thing is that these drifts play into the hands of Serbian politicians, who had immediately dismissed the mobilization as nationalist extremism".

The point is, in a climate of general indifference, keywords have gradually changed. The flags of independent Bosnia, used by the Army during the conflict of the nineties and re-appeared last Monday, is the main suspect. The protest has shifted from baby bottles to zlatni ljiliani, from the critique of the political class to the support "of the Republic of Bosnia and Herzegovina". Such nuances have not escaped the eyes of local commentators.

Emir Imamović (Radio Sarajevo), in a sharp piece called "the children who have devoured the bebolucija ", expresses frustration for "the failure of a historic occasion" and a protest that has been transformed "into its opposite, let's face it, into a Bosniak parade [...]. Bebolucija had a simple, apolitical goal: to obtain from the government the services we have all paid for". Instead it ended up, according to Imamović, encouraging the emergence of symbols and slogans that belong in fact to a single ethnic group and are perceived in diametrically opposite ways across the country.

If the signals of this "degeneration" are emphasized by the Bosnian press, the resolutely censorious tone of this editorial is indicative of a movement that has become disoriented. "How is it that from blocking institutions, demanding an identification number for all, and a fund for serious childhood diseases, we have moved to absurd threats such as boycotting stores and not paying bills?", asks Vuk Bačanović from the columns of Buka . "How is it that the organizers, who have always been very careful to distance themselves from any political party, now find themselves at the mercy of extremely marginal groups such as the Anti-Dayton?".

The weaknesses of civil society

Bačanović provides a first, pithy explanation by attacking the initiators of the protest: "A popular resistance movement, besides a well-defined objective, needs a strong organisation, good logistics, and iron discipline. Otherwise, it is just a confusing array of individuals".

There are, of course, systemic difficulties. "It is unlikely for revolutionary, civic movements to have effects on institutions in Bosnia and Herzegovina", says to OBC Suad Arnautović, professor at the Faculty of Political Sciences in Sarajevo. Among his works, many are dedicated to the country's political system: "Citizens' movements cannot change anything, because our institutional system, determined by Dayton, effectively paralysed our political life crystallising it on ethnic grounds". Riots such as those that occurred in the capital in recent weeks do not have the strength to bring change. "Rather, it is best to set one's hopes in purely institutional reforms, such as those that should resolve the dispute Sejdić-Finci".

So, after a month only, the "baby revolution" seems already sentenced to a reflux that is emblematic of the Bosnian stall. Society and politics in Bosnia and Herzegovina are separate continents, and any 'civic awakening', far from being a bridge between the two, exacerbates the distance – because it denounces the absence of organisations and individuals capable of filtering popular demands and making them 'political', part of a normal democratic dynamic.

No intellectuals – they have not taken an active part in the movement. Like thousands of other people, they supported it by sharing their pictures with the inscription "JMBG" (Jedinstveni matični broj građana, unique personal identification number). The endorsements which have aroused more enthusiasm came from the Bosnian national football team and one of its main stars, Manchester City striker Edin Džeko, who sent a photo of him and his partner on a tropical beach. Virtually, a postcard.

No NGOs – although many activists have participated in the protest as "a purely personal initiative". As stressed by Darko Brkan of Zašto Ne in an interview to OBC, "the first imperative of the mobilization was to avoid the interference of any organization or party", to keep alive a national movement that "is not the fruit of hope, but of despair".

Lastly, no political parties. The fault is probably equally divided between the two sides. The bebolucija movement, proclaiming at all costs its independence from any party, has made a fetish of it. The price of detachment was isolation – in fact, protesters have now alienated every possible interlocutor. On the other hand, politicians have not been able to create a trust relationship with the 'indignados', to try to support their claims. It was clear that traditional parties would be uninterested, but even formations of 'civic responsibility' and disconnected from any ethnicity, like Naša Stranka, have failed to enter into meaningful dialogue with the protest.

"We participated physically in the first days of the event", says president of the party Dennis Gratz, interviewed by OBC: "I personally had no problems to appear among the organizers, if only for the fact that, trivially, we have no representatives in parliament".

Gratz notes that there have been attempts to create synergies with the movement, but that they were useless: "They were obsessed by the fear that some party could exploit them. A bit naïve, if understandable,  position. I have deep respect for citizens who are protesting, but there is one thing that unfortunately they do not understand: putting all parties into the same cauldron is a dangerous game. Most protesters are young people who do not even vote. But the politicians in power in Bosnia and Herzegovina have been there for twenty years, and the only way to send them home is to beat them in the elections".

Without an alternative way to change the country already in next year's elections, this protest is likely to be an episodic event. Maybe it will contribute to civic awakening in the country, but to accomplish something it needs more than balloons and Yugo-rock.