The Bjelave children: the case is still open 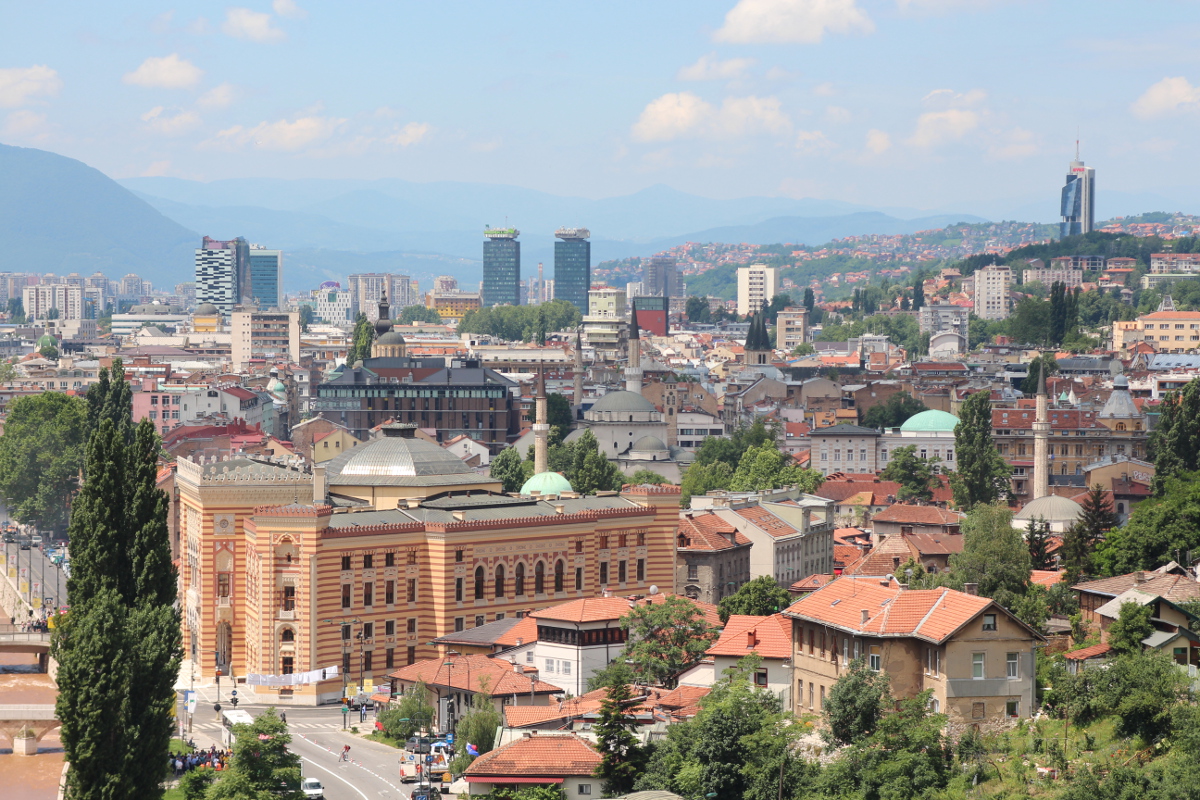 During the siege, 46 children from the Sarajevo orphanage were sheltered in Italy. Although not all of them were orphans, they were not repatriated, but given up for adoption. Some of the biological parents have been looking for them for years. An interview with human rights activist Jagoda Savić, who has been dealing with the case since 2000

This interview is part of an extensive investigation, presented in an article published yesterday

You have been dealing with a case that raised a lot of attention years ago: that of the children of the Sarajevo orphanage who were sheltered in Italy during the war, but instead of returning to Bosnia were given up for adoption.

From a legal point of view, at first sight everything seems fine, and yet it is not. It is worth remembering this story not because something can be changed – the adoptions were completed and nothing can be done – but because it can serve as a very useful lesson for Italian jurists about the mistakes that were made in an international adoption procedure involving refugee children, a country at war and with a long, difficult post-conflict period.

Why did you start dealing with this case?

I found myself involved in this story in 2000, when Uzeir Kahvić, father of Sedina, who was part of that group of children, came to the office of my non-governmental organisation "SOS – telefon", where we dealt with domestic violence, but also with difficult family situations in general. He asked us to help him find his daughter after years of trying in vain alone. So, I began to gather information and I reconstructed the story that began back in 1992 and which proved to be very complex.

From Sarajevo, under siege for three months, on July 18th, 1992, a convoy left with 67 children, including 46 orphans and children with disadvantaged situations who were at the orphanage "Ljubica Ivezić" (since 1997, "Dječiji dom Bjelave ", ed.). Their departure had been decided to take them to safe places: the city was bombed every day, lacked light, water, and food. The centre also hosted infants and very young children, and was not able to ensure minimum living conditions. So, the transfer was a good decision, there is no doubt. They arrived by bus to Split on the Croatian coast and then by sea they reached Ancona.

Where were they taken and who took them in charge?

Upon arrival in Italy, the children were divided into two groups: the 35 children under 10 years of age were taken to the "Centro Mamma Rita " in Monza, while 11 ended up at the "Santa Maria" summer centre, Bellaria Igea Marina (in the province of Rimini, now called "Holiday home San Giuseppe", ed.), run by nuns. The children then stayed there some years instead of returning after a few months as planned, due to the prolonged war in Bosnia.

One of the issues that emerged during our research is that the Bosnian and Italian authorities signed no document regulating the terms of reception, such as the time to be spent in Italy, the duties of those taking the minors in charge, and the rights of the latter. Therefore, upon arrival, the children were immediately placed under the jurisdiction of the Juvenile Court of Milan.

Why did not the children return to Sarajevo at the end of the war?

I know that between 1995 and 1996 Duško Tomić, representative of the organisation "Prva Dječija ambasada Međaši" (First Embassy of the Međaši Children), who had organised the convoy, and Amir Zelić, then director of the orphanage in Sarajevo, went to Italy for information on the children and to request their return. Amir Zelić told me that the Italian authorities had found that in Bosnia and Herzegovina there were not yet the conditions to have them back.

Later they were given in foster care to Italian families and the procedure for adoptability started. What happened then between Italy and Bosnia?

Here began the first clashes, divergences, and rebounds of responsibility on what happened then between Italy and Bosnia Herzegovina.

According to the documents I examined, on June 27th, 1996, the Department of Social Protection at the Council of Ministers, later approved by the Central Commission for International Adoptions and published on July 8th, 1996, it was decided that all the children of the Bosnian group would be subjected to the procedure of adoptability under the local jurisdiction, namely the Juvenile Court of Milan.

Meanwhile, in Bosnia and Herzegovina, on April 24th, 1996, the government ratified, on the recommendation of the Ministry for social policies, refugees, and displaced persons, the "integral programme for the protection of refugee children without parents from Italy to BiH", which provided for the return of minors by the following June. The text of the Programme was then forwarded with a letter from the Bosnian Ministry of Foreign Affairs to the Consulate of Bosnia and Herzegovina in Milan, on April 25th.

Only in 2007 , from the report by the Group of Experts of the Council of Ministers of BiH, established in 2005 to investigate this case, it emerged that the Bosnian Consulate in Milan between April and June 1996 had not been able to translate the Programme.

In this regard, there is a point that I want to underline. Italy expected too much from a nascent country, just emerging from the war, which had yet to set up a functioning system of public administration management – a country that did not have the minimum conditions to continue with the procedures required by law of the country of origin of children subject to international adoption.

Italy behaved with our country as if dealing with any other European state like France or Germany. It initiated sensitive procedures without checking and monitoring that procedures in Bosnia were properly executed. It was the most serious mistake on the Italian side, although not the only one.

First of all, some children were given up for adoption without their birth certificate in the legal file. This means that for example, in the case of two minors, Vedrana Hastor and Dejan Goljanin, the adoptability procedure was started by the Milan Court with these names, but in the Bosnian registry they are registered with other names.

Then, there is the question of the international letters rogatory, which is the basic act of the international adoption procedure, where the biological parents must answer if they want to get their child back or to give them up for adoption. Italy first sent a verbal note and then some subsequent ones, urging Bosnian authorities to obtain answers. But the letters rogatory – I can speak for the cases on which I have investigated – never arrived to the parents, and the answers obviously never arrived in Italy. So, after 5 years of waiting, the Court of Milan issued the sentences of adoption.

This "game" of letters rogatory represents another important point: the Juvenile Court of Milan on the dispatch of international letters rogatory and Bosnian authorities for their reception. These two "games" caused an unjust detachment between the biological parents and their children, violating the right of both parties to express themselves on the matter.

On the other hand, we know that the law, according to the Hague Convention implemented by Italy in 1998, allows for extreme cases where it is possible to proceed with the adoption without the parents' consent.

Yes, but there is the non irrelevant fact that some letters rogatory contained mistakes. I can only speak for the cases on which I was able to obtain certain information and copies of documents, although after we had been prevented from accessing them for years.

One of the letters rogatory was sent to the wrong country: next to the name and city of residence of the the parent was written the abbreviation "Ex Yu", when instead it is a place (Loznica) that is in Serbia and not in Bosnia and Herzegovina. With that signature "Ex Yu", as you know non-existent for years, the letter was sent to Bosnia – a country that at the time had many conflicts with Serbia – and was not sent back to the sender.

The second was sent to a mother who had been dead for years, as well as to the living father. And this despite the fact that this child's file, in the social and family anamnesis that is attached to every procedure of adoptability released by the services in charge, clearly stated that the mother had committed suicide immediately after delivery. This is the case of Uzeir Kahvić, the judge of the Milan court had to be aware of this.

What about the Bosnian authorities?

We also investigated, as far as possible, the legal steps taken in Bosnia. We found confirmation that a group of letters rogatory were received by the Ministry of Foreign Affairs and regularly sent to the Ministry of Civil Affairs, which at that time was competent to deal with the problem.

For the remaining letters rogatory, we did not obtain such evidence. We also asked the Department for refugees, displaced persons and therefore adoptions that was under the BiH Ministry of Civil Affairs. They answered officially and in writing that documentation did not exist in the archives. So at that time we could not verify whether or not the Bosnian Ministry of Civil Affairs had sent the rogatory letters from Italy to the lower levels.

But this was not the last of it. We then turned to the lowest administrative level, i.e. the Ministry of Social Affairs of the Federation of BiH, one of the two entities in which the country is divided. Appealing to the law on free access to information, we asked to access the archive, but from the archive they replied – lying, as we discovered later – that they had no documentation.

We did not give up and we went to the office of the Federal Minister for Social Affairs. After years, we obtained an incontrovertible document with the names of the Commission that controls the delivery of the documentation, complete with names and signatures of the members, stamp, and the list of all the files that had been deposited into the archive. It is from this list that we discovered that, the first time, the archive management had lied to us.

So, the administrative complexity of the country, fragmented and on several levels, did not facilitate a regular procedure and made it very difficult to discover the facts.

Without having access to the archives of all levels, we cannot know if there was premeditation on the Bosnian side or if it was just chaos due to the post-war transition. In this regard, I would like to mention that we also addressed the cantonal level (the Federation of Bosnia and Herzegovina is divided into 10 cantons, in tun divided in numerous municipalities, ed). But unfortunately, since already at the "upper" level – the federal one – we had not obtained any information on the reception of letters sent by Italy, the Centres for social affairs of the different cantons where the parents lived did not provide information either.

I can only say that among the parents with whom I have come into direct contact, nobody received the letters rogatory except in one case, where the parents had died and the grandmother of a child said she received it.

How many children were given up for adoption?

The result, unfortunately, is that these Bosnian children did not return to their place of origin and lost contact with their families. An artificial detachment was created between biological parents and children, and the latter convinced themselves that their parents decided to abandon them.

I can tell you this, because I followed several cases besides Uzeir Kahvić's and I am following another one, that I learned about in 2015. Like Uzeir, this father has been looking for his son, who arrived in Italy with that convoy in 1992, for 22 years. But this is another long story.