Sarajevo: the slow decay of the Holiday Inn 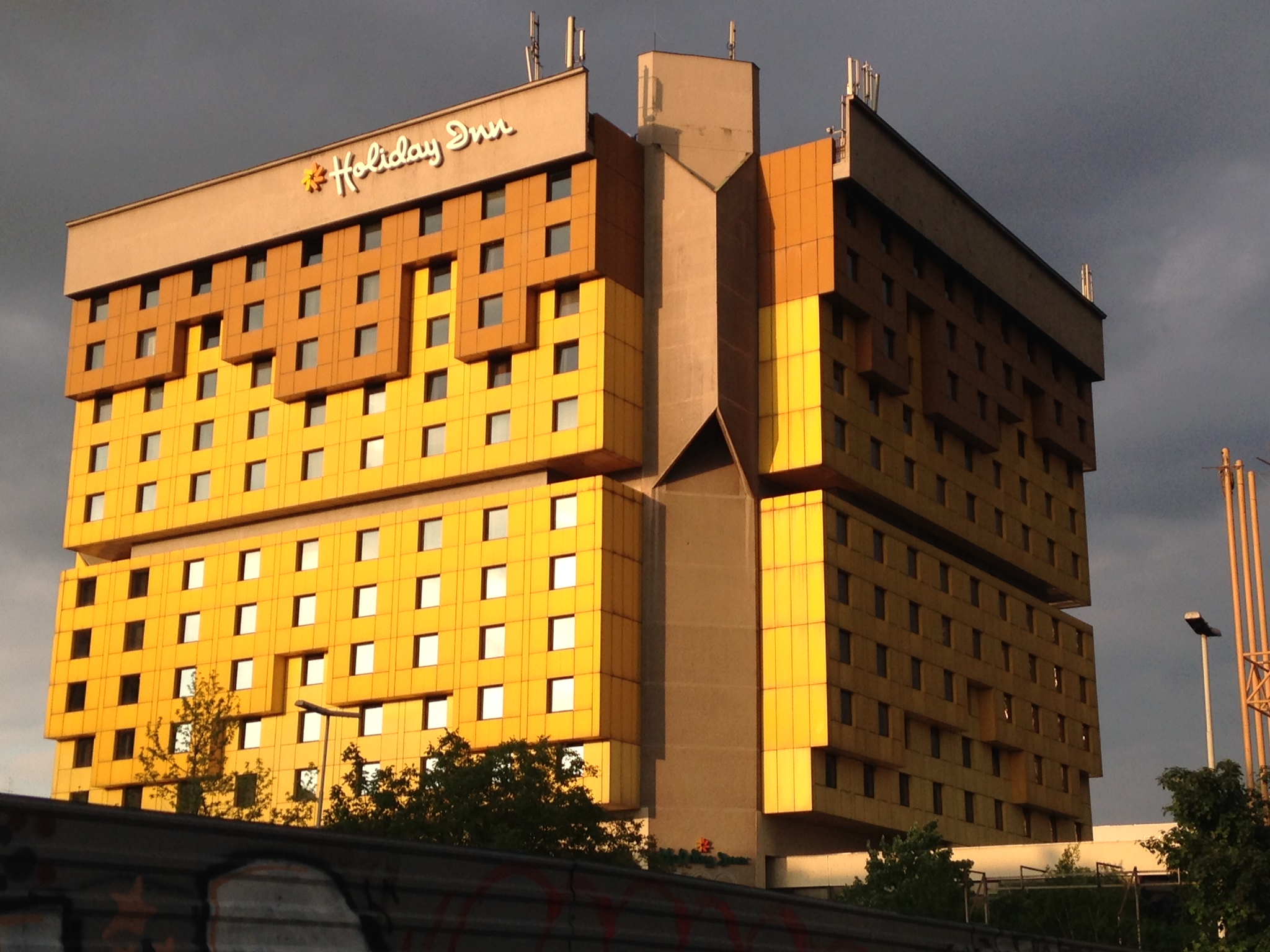 Once one of the city's symbols, now in ruins, the Holiday Inn hotel was declared bankrupt last June, but continues its activity. Illegaly

As the sun sets over Ilidža, the deserted lobby of the Holiday Inn becomes murky. In the dim light, the tables covered with a thin layer of dust, the two waiters tell about the way their lives changed over the last few months. "If anything – they minimize – now the situation has improved slightly. Work runs almost regularly. The administration started to pay us the same wage we received before, about 800 marks" [400 Euros, ed.] "Of course, we cannot say that everything is transparent – they hasten to add – and we're sorry for those who were forced to leave".

Until a year ago, over a hundred people used to work here. Their numbers were cut by half. According to the employees' accounts, the decision was made by Alen Čengić, owner of the famous restaurant Park Prinčeva, who has de facto taken over the hotel for some months. The Holiday Inn used to be famous for being home to the international press during the war of the nineties. The two middle-aged waiters I am interviewing had continued to do their jobs even under the bombs. They have been there since day one of the hotel: "This place is our whole life. It hurts to see it end up like this".

This view is shared by Hakija Zajmović, judge at the Sarajevo tribunal, who argues that "the current situation of the Holiday Inn is a serious damage to the reputation of the hotel itself". Zajmović is not taking issue with the current decay of the premises, but rather with the criminal privatization process which has been causing it.

The history of the last twenty years of the hotel, despite the Bosnian authorities' ongoing attempt to present it as one of the most successful privatizations in the history of the country, is in fact above all the story of a very long requiem. The structure, built in the eighties to host the Yugoslav élite during the 1984 Winter Olympics, was offered to foreign capital after independence. In 2003, it was purchased by Austrian citizen Jakob Keuss, owner of the company Alpha Baumanagement, who succeeded in the operation thanks to a true achievement of creative financing.

To take possession of the hotel, Keuss needed to pay 22 million Euros by 105 days. In order to find the money, he turned to the Austrian bank Hypo Alpe Adria for a 30-million Euro loan, with the Holiday Inn itself as collateral mortgage. Keuss closed his loan agreement with Hypo on March 18th, 2004; the privatization agency received his payment for the Holiday Inn on March 25th.

In fact, Keuss managed to purchase the Holiday Inn thanks to a mortgage on a property that, formally, he still did not own – an accountancy miracle accomplished thanks to the clearance by Rifet Đogić, then president of the privatization agency of Kanton Sarajevo. In the sales contract, among other things, Keuss committed to invest 500,000 Euros to modernize the building, which he never did. In fact, he disappeared almost immediately, while the hotel management started to accumulate debt on debt.

In February last year, while the country was being rocked by a massive wave of protests, employees spontaneously crossed their arms to demand respect for their rights: they had not received their salaries for five months, and the administration had failed to pay their contributions – including those for pension and public healthcare – for three and a half years. In April, the government of the Federacija decided to include the Holiday Inn in the list of "dubious privatizations" up for review.

"We have not heard anything since then", say the workers.

The failure, threats, and good bargains of Mr. Alen Čengić

Also in April, a preliminary investigation began to assess the basic conditions for an insolvency proceeding against the Holiday Inn. In June, the hotel was declared bankrupt and an official receiver was appointed – Nedim Memić – with the task of liquidating the debts of the administration. This development satisfies the workers because, at least, the bankruptcy administration starts to pay their salaries regularly. The ultimate goal is to find a buyer for the property.

Everything solved? Not at all. In fact, it is starting from this moment that the story gets grotesque. "On June 3rd, 2014 – explains judge Hakija Zajmović, of the Court of Sarajevo (formally in charge of the case) – bankruptcy attorney Memić reported being attacked and beaten by two masked people in front of his own house", in Sarajevo. Memić himself had reported that, in the previous days, Mr. Alen Čengić had "turned up at the Holiday Inn, claiming he had concluded an agreement with Keuss and asking that he be granted the ownership of the Holiday Inn".

The agreement "was absolutely irregular", Zajmović is careful to point out, yet Čengić de facto took over the hotel, and nobody objected.

As a result of the beatings, Memić resigned from office. After the incident, fearing new attacks, he refused to make statements. In in his place, the Tribunal appointed Nijaz Dervišić. "On July 22nd, 2014 – continues Zajmović – Dervišić went to court to report that he had found the manager's office occupied by Alen Čengić, who had introduced himself as 'the new tenant' of the hotel. When Dervišić had asked 'what this meant in practice', Čengić had answered he was the one in charge of the hotel".

According to files of the Court, the (second) receiver complained that he could not perform his duties, as he could not get hold of the structure. After Dervišić resigned too, the Court appointed a new trustee (the third in a few months), Muhamed Mahmutović.

"As of today – stresses the judge – Mahmutović has never turned up at the Holiday Inn". Reached by telephone, he refused to issue any statement, claiming that "the situation at the moment is extremely complicated" and that "being a serious person, I refuse to release any comments that could affect my work".

There is no doubt that the situation is indeed complicated (and utterly devoid of any legal basis, as pointed out to OBC by the Court of Sarajevo). For months now, Čengić has managed the hotel without any authorization. He has even changed the name from Holiday Inn to Hotel Holiday and fired half of the old employees.

Another employee at the Holiday Inn, Mehmed Obradović, who is in direct contact with the administrator and is a member of the creditors committee, was threatened – together with his family – by gunmen last December. According to the court of Sarajevo, the situation should still be resolved "by the end of March", although this statement has not been substantiated.

The absence of the international community

Meanwhile, life goes on at the hotel – and, it would seem, things are not too bad either. On September 19th, Čengić organized an official inauguration of the new Holiday Inn/Hotel Holiday. Over the last months, a fair amount of events took place at the hotel, including a regional conference on floods organized with the support of OSCE and UNDP, in early November.

Therefore, not even the international community seems to be particularly concerned about the fate of the Holiday Inn, and the proven unlawfulness of its current administration. After all, no agency has ever been tasked with overseeing privatizations in Bosnia and Herzegovina, which therefore have always remained an exclusively internal matter.

Transparency International Bosnia and Herzegovina, for example, when asked about the subject, admitted "never dealing with it" and, urged to investigate the story, claimed to be "collecting enough material to clarify the details of the situation".

In this regard, also the OSCE, despite including the rule of law into its areas of intervention, emphasizes that "privatization does not fall within the mandate of our organization", as confirmed by spokesperson Željka Šulc.

The same answer, with slightly different tones, came from the European Union, which invited "to consult local authorities about it". However, local authorities – it would seem – are not yet able to ensure compliance with the law.