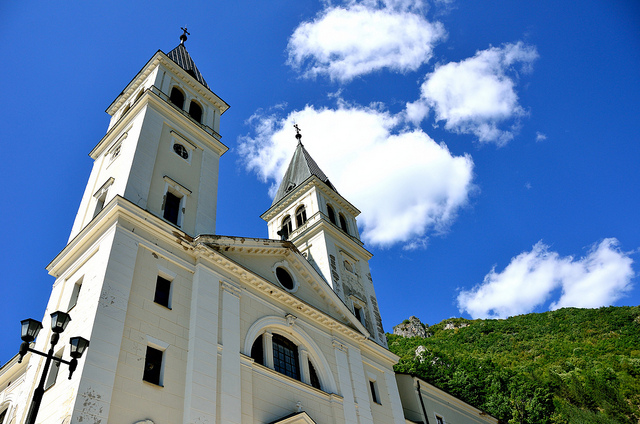 The forthcoming visit of Pope Francis to Bosnia Herzegovina prompts comments and analyses on the issue of catholic identity in the Balkan country. Our interview to academic and mediaevalist Dubravko Lovrenović

Should the Pope want to visit the cradle of Catholic culture in BiH, find the oldest traces of the presence of Catholicism in this state, where should he go, who should he meet?

I think he should visit the three historic monasteries of the Franciscan province of Bosnia Srebrena in Kraljeva Sutjeska, Fojnica and Kreševo.

There, at the scene of a marginal Catholicism drama, performed by the Franciscans and started in the mid-fourteenth century, he could discerningly ascertain the historic way that the Bosnia and Herzegovina Catholicism has paved since the late antiquity to the present. These museums were not created by the established church structures, let alone by extortion and pillage; they were not created by a ‘militant’, but by the ‘praying’ and ‘suffering’ Church. These collections of harmonious diversity were created mostly spontaneously, by saving the objects of practical use between two fires, the plague, famine and war, in a struggle between hope and hopelessness.

Dubravko Lovrenović (Jajce, 1956) is a mediaevalist and professor at the Department of Philosophy of the Sarajevo University. He is a member of the Academy of Sciences and Arts of Bosnia Herzegovina, of the Commission for the Preservation of National Monuments and of the Commission for the cooperation with Unesco. In an interview for the Sarajevo daily Oslobodjenje he has declared to have solved for himself the “croat issue” in Bosnia Herzegovina declaring himself as a “bosnian” at the recent general census of the population.

In our three Monte Cassinos lie the pillars of the historical memory of the old Bosnia. All this together reflects our basic, Bosnia and Herzegovina identity, which has since fallen into oblivion and has been replaced by a modern-era form of paganism: the cult of the Nation. Be that as it may, the further blind insistence on the subversion of the culture, commenced in the name of higher goals and a happier future in the late 19th century, with the slogan God and Croats, cannot be justified by anything. It is not necessary to be a clairvoyant to say that such a concept cannot bring anything good as it has not brought anything good so far.

Who are the Catholics in Bosnia Herzegovina today? Which community will the Pope find to welcome him?

The present-day Catholics in Bosnia and Herzegovina are much more Croats than Catholics, they are the result of swapping theses, which, being universal, should not be happening to the Catholic Church itself, in other words, the thesis that a national identity cannot be built on the basis of religious affiliation. The BH Croats are the result of merging the romantic integral Party-of-Rights Croatianism of Ante Starčević with the political Catholicism appearing on the historical stage by the end of the 19th and the early 20th century. This is how the ‘external’ nation was born, the nation which, from the very outset, produced a pernicious political untruth: ‘There is no life outside Croatia.’ Controlling the identity by means of a ‘remote control’ has proved to be extremely risky. The expected outcomes and unexpected consequences have not been able to harmonize for more than a century. A thousand-year-old dream of a Croatian state has been had, but instead of one, we have come up with two states having Croats as a ‘constituent’ people. This is why the BH Croats today do not know what to do with their own state, because the cultural and political identity will not be easily harmonized. Croatia is an answer: we have been declared a Diaspora in our own homeland and state. Thus, slowly but certainly, the BH Croats started becoming and have finally become the hostages of the historical ‘visions’ which are today ‘celebrating’ their repeated collapse.

The Croatization of Bosniak-Catholics commenced at the turn of the 19th and 20th century – in the early stages of the industrialization and modernization of Bosnia and Herzegovina, and has brought about consequences of political, cultural and psychological nature. The then commenced process of cultural standardization and equalization will eventually - by converting the Bosniak Catholics to Croat-Catholics - result in a core change of terms such as ‘historical land’, ‘homeland’, ‘culture’ and ‘state’ for a trans-generational transformation of their political and cultural tradition. 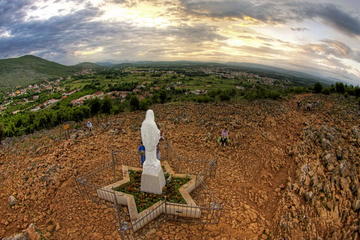 Nationalizing this rural BH Catholicism, since the very beginning, has pushed this tradition into a deep gap between the cultural Croatization and the imaginary Croatian state, which, in the romantic Party-of-Rights visions comprised Bosnia and Herzegovina. The mythologem of the Greater Croat state comprising Bosnia and Herzegovina as a constituent part used to be and still is just this – a mythologem - accompanied by the monologue character of the Croat nation.

With the BH Croats or without them, the present Bosnia and Herzegovina is a disinherited country – robbed both inside and outside by various off shore banks and political parties, ‘in the name of the people’, in the name of the ‘vital national interest’. Dealing with and trying to solve the ‘Croat issue’, some individuals have come into possession of some prestigious edifices of 2,000 square meters. We have been imperiled and threatened primarily by our own lies and by our own hypocrisy, which we are, at all costs, trying to convert into ethno-national dogmas. This gives birth to divided cultures and split personalities, losing their last chance to come out of this decadent state of the ethno-national political culture.

Such a re-feudalized community, led by its ethno-politicians, will welcome and host Pope Francis in Bosnia and Herzegovina.

How deep is the identification between the Catholic community and the Croat nation in Bosnia?

Deep and questionable, to say the least, dysfunctional. It is one of the typical Balkan examples which testify to the fact that nations can be created on the basis of religions, not on the basis of a language or something else; the fact that the nation and the church in South-East Europe are two virtually inseparable concepts.

The mediaeval slogan – ‘There Is No Salvation out of the Church’ – has been translated into the new-age one: 'There Is No Salvation out of the Nation.’ The religious and ethnical identity has then been merged within the new political horizon of neo-liberal capitalism. A new form of ‘group narcissism’ is born – the phenomenon ‘of the utmost political significance’ – in whose character of self-worship, according to Fromm, ‘lie the roots of fanaticism’. That is why the current link between the Catholic community and the Croat nation in Bosnia and Herzegovina is nothing but a form of combat mobilization, or betrayal of the fundamental principles of Christianity.

Do you think the Pope's visit will strengthen the country's cohesion, or is there the risk that the visit will be used by some as a factor of division?

On the contrary: there are plenty of reasons to suggest that the Pope’s visit, as a counter-effect, might contribute to the further strengthening of political Catholicism as a fundamental determinant of the national identity of the BH Croats. This could be only prevented by the Pope himself, marking the historical experience based on political Catholicism as a good intention, but unfortunately fatal in its realization.

Some important issues divide the Vatican from part of the Catholic community in Bosnia, first and foremost Medjugorje. Another delicate issue is that of members of the Catholic Church who took or take sides with war criminals, as was the recent case with the return from jail of Dario Kordić. Do you think that these issues could limit the success of the Pope's visit?

I believe that the Pope’s courtesy visit to Bosnia and Herzegovina will not change anything essentially when it comes to Medjugorje. There, namely, some (Franciscans) believe in apparitions, others (the Bishop and the Vatican), however, do not accept them. Meanwhile, the phenomenon has come to life at the global level resulting in millions of pilgrims coming to Međugorje. Until a ‘counter-miracle’ happens, I am convinced that the situation will remain unchanged.

The welcome given to Dario Kordić on his return from prison is a different matter. Just about 200 people came to welcome him at the Zagreb airport, including some former high-profile Croatian politicians, whose policy had, actually, sent Kordić to prison. The Bishop of Sisak, Vlado Košić was present, too. If, on that occasion, someone had said a word about the crimes that Kordić had been charged with, and because of which he had been sentenced and convicted (and which no one questioned in the meantime), all of this could have made sense. This way, however, this was just a ‘crowd’ cheering Kordić’s return from prison, as a symbol of one failed, criminal policy. This cannot be equated with the attitude of the majority of Croatian citizens, struggling to provide the basic necessities of life and having neither time nor energy for the exhibitions (stunts) of this type.

Something similar happened at welcoming Kordić in the town of Busovača. The HDZ (Croatian Democratic Union) of Bosnia and Herzegovina took advantage of this opportunity to intensify the feeling of fear among the uneducated Croatian electorate, especially among those whose existence depends on the Party; some priests gave the Church legitimacy to it, the Church leaders remained silent, and the whole event ended in a war cry on being imperiled and on the need for unity.

If the Pope spoke the words of the Gospel on all this, his visit to Bosnia and Herzegovina would have a real effect. It remains to be seen if this will happen.