Sarajevo: the road to nonviolence 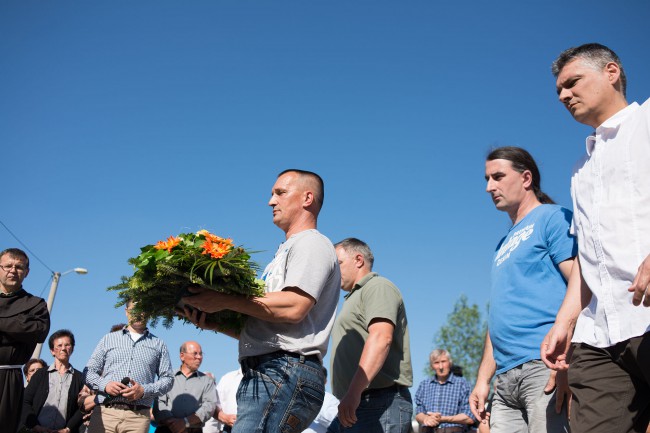 Twenty years after the end of the war, veterans from opposing sides deal with the past joining the programs of the Centre for Nonviolent Action

Sarajevo’s Centre for Nonviolent Action (CNA) is on Kranjčevićeva 33, in the centre of the Bosnian capital. Activists here share the goal of “building a sustainable peace in the former Yugoslavia, through the promotion of nonviolence, dialogue and a constructive approach to the past of the region.”

Their “constructive approach” includes the choice of working with war veterans of the 90s. I meet Adnan Hasanbegović, one of the team, in the bureau of the association. After a few minutes, he explains that he, self defining “a pacifist”, at the beginning of the war had been enlisted in the Bosnia and Herzegovina Army, and had fought in the defence of Sarajevo.

"You cannot judge a person just because they’ve gone to war."

According to Adnan, it’s exactly the veterans who today can play a pivotal role in society, to counter the nationalist climate still prevailing in the region and to overcome divisions bequeathed by the conflict.

"At the beginning of the project, immediately after the war, we were working only with civilians, especially with young people, organizing training on nonviolence. We realized, however, that most often the youth already agreed with us, and they had little influence in public debate. At the same time, we realized that many veterans were opened to dialogue and available to work on reconciliation. Unlike young "liberals", the positions of the veterans had a great impact in local media. Even the politicians seemed afraid of them, still today, because the veterans have always been represented as almost "sacred" figures, the builders of the nation."

At the beginning of the 2000s, CNA began to organize public meetings among former soldiers of opposing sides. "I found myself talking, in Serbia, about the siege of Sarajevo, about my fears, emotions, and about our army," says Adnan. "Despite the difficulties, I saw that this created empathy, it was part of a humanization process, which contrasted the stereotypical image of the enemy."

Over time, trainings run by peace activists of the CNA, which has an office also in Belgrade, created networks that cross the boundaries of the different countries of the region.

"We involved several groups of veterans, there are veterans associations virtually in every city of the former Yugoslav space. In addition to trainings, which involved groups of 15 people, we have continued to hold public meetings, and joint visits to sites where atrocities were committed. We don't ask the veterans to spit on what they have been fighting for, but ask that they try to imagine something for the future, for peace in the region".

Of course, veterans are not pacifists, Adnan explains, but "very often they are against the war." Confronting the past is a crucial matter. According to Adnan, the main problem today is that in the former Yugoslavia, different communities are closed within completely different narratives.

"Veterans too, they have to struggle in order to get out of the official narrative of war. In their case, however, there is a spark that drives them to speak. They want to show that they are human beings, not murderers. Speaking, however, is not easy. If one steers away from the official narrative, for instance by talking about the crimes committed on their side, they get exposed to the risk of being labeled traitors. It is an accusation that is continuously brought up, even in my case. In order to continue on the path to peace, however, there are no alternatives."

Other associations, in Sarajevo, are walking this difficult road. One of them is GARIWO , which declared its mission that of "educating to civil courage." The director of the organization is Svetlana Broz, the granddaughter of former Yugoslav President, Josip Broz Tito. Broz, who served as a medical aid to civilians during the war, has gathered hundreds of testimonies of people who, throughout the former Yugoslavia, have helped their neighbors regardless of their ethnic, religious or national backgrounds.

These stories made it into a book, Good People in an Evil Time , and sum up the spirit of the association. According to Broz, younger generations must learn the courage to "say no", to develop a critical awareness that fosters resistance to conformity, even in difficult times. The road to peace, according GARIWO, passes right through civil courage, defined as "the will and ability to disobey, to resist, to oppose and to end by non-violent means the abuse of power."

The opposition to war, in the early 90s, expressed by thousands of people in Bosnia Herzegovina through marches and demonstrations, was unable to resist the curse of events at the beginning of the conflict. A new generation of citizens, educated through the hundreds of courses and meetings that GARIWO holds also in public schools, could make the difference today.

Courage, however, is not only necessary during war times, but also in peace. One of the awards given annually by GARIWO is dedicated to Dusko Kondor , a school teacher and activist for Human Rights in Bijeljina, eastern Bosnia. A Bosnian Serb, he was killed in 2007 because he had chosen to testify against those responsible for the killing of 23 Bosnian Muslims that took place in his city during the war.

During his recent visit to Sarajevo, Pope Francis spoke of peace as a "craft that requires passion, tenacity and experience." Twenty years after the end of the war, against a gloomy political situation and the still difficult economic environment, there are many who work in this spirit, outside of the spotlight.