The words of a Pope 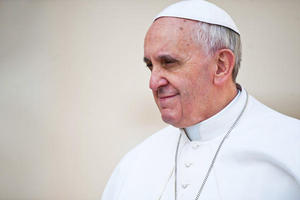 Pope Francis' visit to Sarajevo could help putting an end to the limbo blocking Bosnia's society since over 20 years. Much will depend on his words, and actions

Pope Francis has announced he will visit Sarajevo, the capital of Bosnia and Herzegovina, in June in order to “give rise to the development of good and contribute to the consolidation of brotherhood and peace, inter-religious dialogue and friendship.'' A papal visit with such a noble mission is more than welcome in a country still suffering the legacy of the 1992-95 conflict, in which more than 100,000 Bosniaks, Bosnian Croats and Bosnian Serbs were killed.

Bosnia and Herzegovina needs all the help it can get in the tortuously slow process of rebuilding trust among the country’s ethnic groups. A genuine reckoning with atrocities committed during the war is a key element in this process. Such reckoning depends on accountability and acknowledgement of the crimes committed by members of “our” group against people of other faiths or ethnicities.

As a Bosnian, I know that the trauma and feelings of injustice born of atrocities committed in the 1990s still affect our society today, its ability to regain its humanity and make substantive progress in rebuilding civic trust and ensuring rights and dignity for all. The majority of our politicians feed on these traumas, they work hard to keep them alive, using them as smokescreens to cover up their ongoing plunder, corruption and mismanagement of state institutions. Together with their mentors from Serbia and Croatia, they have done everything possible to keep us from the “consolidation of brotherhood and peace” that Pope Francis talks of.

To the desperation of its citizens and the frustration of our European friends, Bosnia remains a society stuck in the past, even 20 years after the war. This is not for lack of effort in prosecuting war criminals – hundreds of them have been brought to justice in our courts and in The Hague over the years. We are paralyzed, caught in limbo between war and genuine peace because we have not translated the truth and justice emerging from courtrooms into acknowledgement, empathy and reconciliation.

Religious leaders who command significant power to influence their followers’ attitudes and perceptions of others have a decisive role to play in ending this paralysis. But instead, some have used their pulpits to sow mistrust and incite hatred of others.

Unfortunately, in our communities such conduct is not only a matter of the past. Recently, bishops and priests of the Catholic Church in Bosnia and Croatia have been at the forefront of the celebration and rehabilitation of Darijo Kordic, a convicted war criminal, who served 17 of the 25-year sentence meted out to him by the International Tribunal for the Former Yugoslavia. Kordic was convicted for, among other things, commanding Bosnian Croat forces responsible for the massacre of 116 Bosniak civilians, including women and children, in the village of Ahmici. The Ahmici massacre remains one of the most traumatic events of the war, a violent tear in the country’s social fabric that is still to be mended.

After his release, Kordic was greeted by thousands as a national hero, as someone who had been unjustly victimized for defending his people. “For 17 years you were with us in spirit. Now you are with us physically as well,” announced a local priest celebrating mass in Kordic’s honour in his hometown of Busovaca.

The celebration started with a minute of silence for Kordic’s fallen soldiers. No mention was made of his victims. There were no expressions of remorse.

This is anything but a genuine reckoning needed for a genuine peace. It needs an honest recognition of the harm done and solemn commitment to amend conduct to ensure it does not happen again. It requires a change of heart and mind. These are the elements at the very heart of Catholic notions of reconciliation. The demand is for “metanoia” – a change of soul.

People like Kordic may not understand such concepts, but priests who have celebrated his return from prison certainly must. Still, they choose to absolve perpetrators as innocents, turning them into martyrs with huge societal and political influence among their people. At the same time, other ethnic groups see it as a form of denial of their suffering and a celebration of the crimes committed against them. Here, wounds don’t heal, they deepen.

This was by no means the lone example of clergy endorsing war criminals, only the most recent one. Nor is this a phenomenon exclusive to the Catholic Church in Bosnia and Herzegovina. Their counterparts in the Serbian Orthodox Church or Islamic Community have also made public expressions of support for those convicted of or indicted for war crimes and crimes against humanity.

Ending this practice, which is poisonous and contrary to the teachings championed by the Pope Francis, would be a welcome step in reviving the brotherhood and friendship he spoke of last week. He can help putting a stop to it.

His every word will be listened to in Bosnia and Herzegovina and the world. Nothing would illustrate his intent to “give rise to the development of good and contribute to inter-religious dialogue” better than a clear, unequivocal message to his clergymen and his flock that there is no honor in war crimes; that there is no cause to justify murder of children; that it is the victims, not the perpetrators, who should be acknowledged and embraced. He can make it clear that peace cannot take root where war criminals are celebrated as heroes.

The people of Bosnia and Herzegovina will welcome Pope Francis. We are deeply honored he has decided to visit Sarajevo. We welcome his prayers, but it is his actions that can make a real difference and help us to move forward.

*Refik Hodžić is Director of Communications at the International Centre for Transitional Justice (ICTJ). He has been working since 20 years in the field of transitional justice as a journalist, film maker and producer. He has been dealing with media and post conflict justice mainly in the former Yugoslavia, Lebanon and Timor East