Bosnia and Herzegovina, institutions blocked at the Dayton market 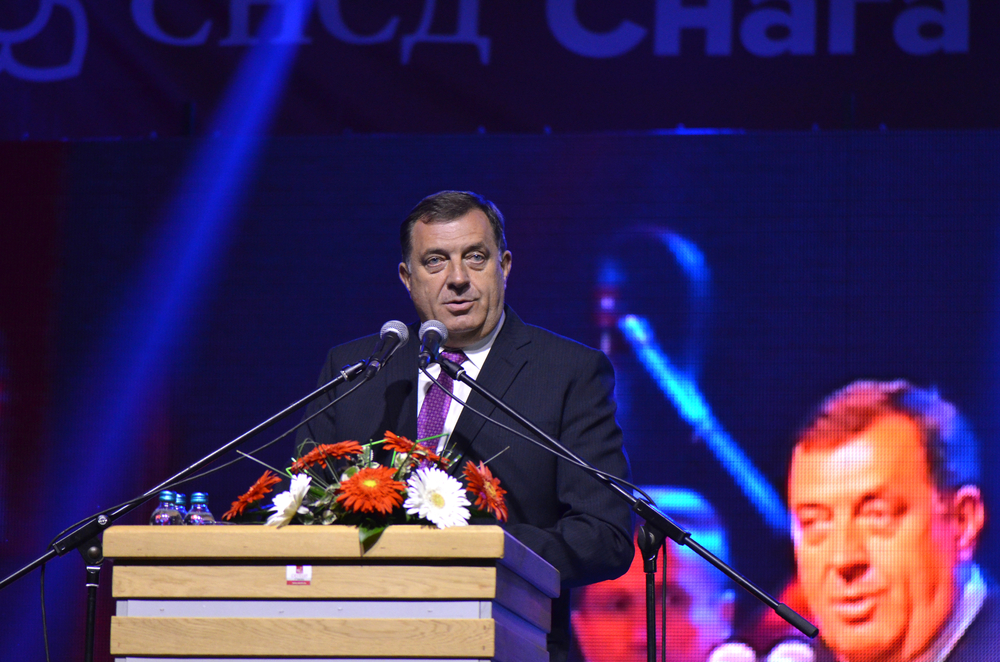 Milorad Dodik – current member of the tripartite state presidency – has launched the RS-Exit for the secession of Republika Srpska from Bosnia and Herzegovina. For some, yet another bluff; for others, a dangerous sign. Collaterally, the Constitutional Court is under attack

Four years ago, the count had already reached 30. A few months ago, an opposition politician updated it to 42 : this is how many times – probably, many more – Milorad Dodik promised to hold a referendum for the secession of Republika Srpska from Bosnia and Herzegovina.

Dodik, current Serbian member of the state tripartite presidency, announced yet another referendum before the Republika Srpska Assembly on February 17th. This time, with a new slogan: “Goodbye BiH, welcome RS-exit ", pronounced just like that, in a stunted English, unusual for him, as if to allude to an international recognition campaign that follows the discursive frame of Brexit – an emulation effect already seen at the time of the Scottish referendum of 2014, from which a social campaign titled 'Yes Srpska' was borrowed in Banja Luka. A slogan that, most likely, will come in handy in view of the Bosnian municipal elections of autumn 2020.

For some, this operation is a bluff, the umpteenth of a long and profitable career, to win consensus, create pressure on political counterparts and on the international community. For others, these statements and especially the acts that accompanied them – the withdrawal of RS representatives from state institutions, which have thus remained blocked since then – are a real threat. "Dodik is held hostage by his words and actions", said Željko Komšić, Croatian member of the presidency. "Unconstitutional and dangerous positions", said Matthew Palmer, the US Special Envoy for the Western Balkans. “Unilateral withdrawal from institutions or blocking of decision making is unacceptable and counterproductive. [...] The decisions of the Bosnian Constitutional Court, like those of the constitutional court of any country, are definitive and binding, and must be applied", stated the joint release of the Quint countries (USA, United Kingdom, France, Germany, Italy) .

To understand the casus belli of the crisis, we need to go back a few months. In December 2019, the Republika Srpska Assembly passed a law that attributed the exclusive ownership of public agricultural land to the RS itself rather than to the state. On February 7th, the state constitutional court rejected large parts of the law, thereby restoring ownership of public land to the state. In response, the RS authorities convened the extraordinary parliamentary session of February 17th, carried out under the great attention of the country's public opinion, broadcast on an eight-hour live broadcast by RTRS, the public channel of Republika Srpska. With an almost unanimous majority (72 in favour and only 2 against), the Assembly voted on a six-point document, with two measures standing out: the order to withdraw "all RS representatives" from state institutions, until a reform of the Constitutional Court is adopted that changes its composition; and the request to mark clear demarcation boundaries between Republika Srpska and the Federation of BiH, that is, between the two entities of Bosnia and Herzegovina.

From a canonical conflict of competences, the political confrontation has therefore shifted to the Constitutional Court, a vital organ for the institutional balance of each country, and even more so in the delicate context of Bosnia and Herzegovina. The Court is made of nine judges: six must be Bosnian citizens and three foreigners, the latter being part of the international supervision that was established by the Dayton agreements. The Bosnian judges are broken down by each of the constituent peoples (two Bosnjaks, two Serbs, two Croats) and designated by the parliaments of the respective entity, while foreign judges are named by the president of the European Court of Human Rights after consultation with the state presidency: currently, North-Macedonian Margarita Caca-Nikolovska, Moldovan Tudor Pantriu, and German Angelica Nussberger, who recently replaced Italian Giovanni Grasso.

What Dodik's party, the SNSD, and its Serbian-Bosnian and non-Bosnian allies ask – with the support of the nationalist counterparts of Croatian-Bosnian HDZ – is that the foreign judges are excluded from the Court and only those of the constitutive peoples remain. This would allow the Serbian and Croatian components to have greater control over the body and, in the wishes of their nationalist parties, to orient the interpretation of the 1995 Constitution in a more restrictive and ethno-centric sense, in particular on the most sensitive issues such as electoral laws and the areas of state-entity-cantons sovereignty.

Dodik addressed harsh words towards the work of the Court, defined as "occupier", "inquisitor", "contrary to the Constitution and Dayton agreements". However, several observers have indicated that the constitution - more precisely  article 6.3 – clearly indicates the Court as the only entity with "exclusive jurisdiction" on conflicts of jurisdiction, and Annex 2 of the agreements states that the entities are separated by "boundary lines", as in administrative demarcation, which therefore cannot be turned into a physical border.

In other words, although Dodik presents himself as the staunchest defender of the Dayton agreements in his narrative, the substance is that the current Serbian member of the presidency would once again be forcing constitutional terms, selecting at will articles and sections of Dayton that are useful to him and omitting everything that is not congenial to him at the moment: a bit like choosing from a menu or at the fruit stand of the market, as shown by the excellent cartoon by Zoran Herceg.

It should be noted that the à la carte approach to Dayton is not exclusive to Dodik: his colleagues from other parties and other national communities have also made and continue to make extensive use of it, albeit in a defensive and reactive way. As has been the case for years, no protagonist of the Bosnian political scene has Dodik's rhythm and initiative; nor are they able to make innovative and credible proposals for a constitutional reform, a "Dayton 2", although the theme resurfaces periodically in the international arena – the last time was in mid-January, apparently for a draft of Croatian-Turkish initiative, about which however there are no known developments.

So why, right now and this way, has Dodik set back in motion the "perfect circle" of Bosnian institutional paralysis (or, as analyst David Kanin more brutally commented on Radio Slobodna Evropa, "the hamster in the wheel, which constantly goes round and round: these crises always lead to the same point")? There are two possible answers.

The reasons for the crisis

The first concerns local politics. As already mentioned, the administrative elections will take place in October. Unleashing a crisis around sovereignty is always useful for mobilising one's base. The very question of the control of state-owned land, in RS where 32% is employed in agriculture – can do. Then, Dodik needs to regain the consensus he may have recently lost: in November, as a compromise to unlock the impasse of the formation of the state government in which his party played a key role, Dodik had signed a document that consolidated Bosnia and Herzegovina's commitments to the Atlantic Alliance.

While remaining ambiguous about future membership, that move deviated from the SNSD's traditional pro-Russian, NATO-skeptical position, sparking allegations of "treason" by the opposition to Banja Luka. Advocating for secession allows to reconstruct the Srpska-Dodik identification in the collective imagination and to corner the opposing Serbian-Bosnian parties. The latter, despite the strong verbal opposition to Dodik, once again showed their subordination in substance, voting together with the SNSD on the motion to withdraw from state institutions.

The second answer is regional. The Western Balkans are experiencing a moment of great uncertainty, due to the bilateral and internal crises (Bosnia, Kosovo-Serbia, now Montenegro-Serbia on the religious property law) and the unclear moves by international actors: after the slowdown in negotiations at the end of 2019, EU enlargement is expected to test the "new methodology " launched on February 5th, while the US seems to be immersed in a new phase of interventionism in the region, which however remains mostly concentrated on the Prishtina-Belgrade dialogue.

Dodik's intention would therefore be to focus attention on himself, relaunching himself as an indispensable dominus of Bosnian politics and as a regional referent of Serbian Orthodox irredentism. Strengthening his regional position and prolonging the systemic crisis allows Dodik (but also the leaders of the other nationalist parties that have governed Bosnia and Herzegovina in recent history) to prevent the knots from being combed, that is, those reforms of justice and rule of law that the EU is asking for with ever greater vigor: reforms that, as is well known, would jeopardise the power of the ethno-political class.

In the meantime, there is an "RS-exit" that has already started and goes on every day. More than an exit, an exodus: that of the thousands of people who leave Republika Srpska to look for work and dignity abroad. There are 17-30,000 of them every year, says the Twitter profile created precisely to denounce "the real RS-exit" and deconstruct the triumphalist rhetoric of the institutions of Banja Luka. The account reports alarming figures and news, between the collapse of births ("on February 16th, no child was born in all the RS"), the drop by over 4% in primary school pupils in 4 years, and the investment and tourism flows, by far the lowest in the Federation.

One user comments : "When I hear RS-exit, I think of Gradiška [the main border town between the territory of Srpska and Croatia] and the visa for Germany". Another adds : "Visa for Germany: this is the only phrase Dodik should learn to say in English".