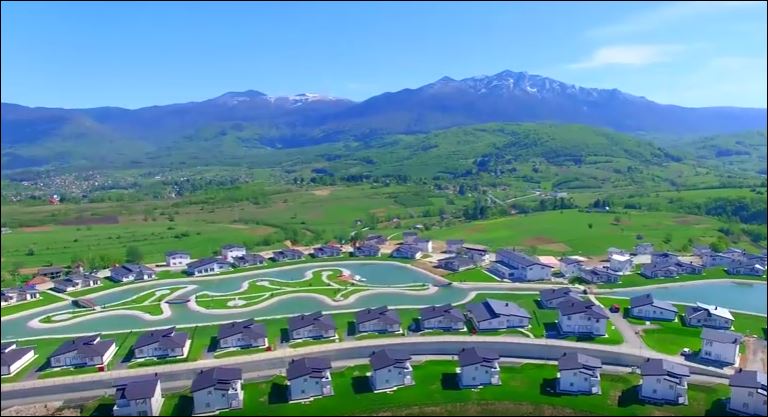 Since its post-war years Bosnia and Herzegovina (BiH) has struggled with an unstable economy, systemic corruption, and, more recently, is beset with large-scale foreign investments that bring more worry than national net worth.

Since 2011, BiH economic upsurge (an increase of 3.2% GDP in 2015, according to World Bank data ) is marked by foreign national massive real estate purchases along with business venture investments, which have developed along with the growing presence of wealthy or well-to-do Middle Easterners, Turks, and other foreigners, mostly in the capital of Sarajevo, its environs, and Central Bosnia.

Instead of boosting economic growth, however, foreign tycoon ventures in BiH play along ambitions of BiH political parties, their leading oligarchs, and local notaries, who more often than not show that private gain over public office is foremost on their minds.

Land and real estate title deeds transferred to foreign nationals in BiH often lack proper documentation and legally sound transactions. In the end, not the state or BiH citizens, only individuals benefit from burgeoning investments turned to corruption practices that threaten to plunge the country into deeper economic mire.

Investments at Any Cost

Wealthy citizens from Turkey, Saudi Arabia and Middle East are buying real estate in BiH at an alarming rate. They arrive as investors or tourists for extended periods, seeking refuge from the dry Gulf summers, as they say, but end up purchasing real estate and investing in businesses that end up being a cover up for more land and real estate purchases.

So far, foreign investments in BiH, especially from the Middle East and Turkey focused on prime real estate in and around the capital of Sarajevo where a number of significant buildings, like Hotel Bristol, were renovated with money from Arab investors. Sarajevo City Mall - housing a five-star hotel, commercial and office space, a shopping centre with entertainment complex, etc. - was built by the Saudi Al Shiddi Trading Establishment.

Majors of the three Sarajevo municipalities of Trnovo, Hadžići and Ilidža, officials of the Bosniak Party of Democratic Action (SDA), are widely enthusiastic about foreign investment potential.

“Our investment in the entire project will not be 10, but 30 percent gain. […] We count on Trnovo to cash in from 500 to 600 million euros for ten years; not to mention the job creation potential," says Mayor Ibro Barilo about the construction of the tourist city Buroj Ozone in Trnovo, located 20 Km outside Sarajevo. The laying of the first stone of the complex, held in September this year, took place in an official ceremony at the presence of public figures .

The UAE-based Buroj Company is investing 2.3 billion euros (according to the same company, this is the largest foreign investment ever made in a single tranche in South East Europe), and Barilo is the company’s purchasing intermediary. The prospective tourist city should offer thousands of housing units, several hotels, and shopping centers sprawling across the prime real estate of the Igman and Bjelasnica mountains.

In Hadžići, the Kuwaitis inaugurated in October 2015 a luxury resort, estimated at over 200 million euros. The resort is planned to include indoor and outdoor pools, sport courts, artificial lake and a hotel.

Ilidža municipality mayor, Senaid Memić, also supports Arab tycoons' development. He rewards investors with discounts for purchasing infrastructure, rents state-owned land to developers for a minimum fee, and participates in the sale of nearby land for new developments.

The village of Pazarić, near Sarajevo, is now a luxury community. Top price was paid for small village houses that wealthy Dubai investors turned into villas. Well-paid local and confidential appointees, responsible for the purchases, ensured the deals were reached quietly and discreetly.

Most recently the sale of parcels in proximity of the nature monument “Vrelo Bosne” in the Ilidža municipality caused widespread public protest, and earned an online hashtag “NeDamoVreloBosne” [We will not give away the Vrelo Bosne].

Three cadastral parcels, protected under the World Commission Protected Areas, in early August were sold to the Kuwaiti Investment Company at a price (38 Euro per square meter according to a report by Al Jazeera Balkans ) considered by many as too low.

Public condemnation is due to the sold parcels proximity to the water protected zone and low sale price per square meter. Ilidža municipality SDP officials have dismissed the public outcry over this sale, saying the resistance is politically motivated by opposition, adding that the transaction was legally sound and transparent.

Rubina Cengić, Start media journalist, cautions about the Arab real estate trend. She says it is hard to know just how much real estate investors acquired, since they buy public and private land from financially needy, or those leaving the city.

Commenting upon this phenomenon and the increasing attention Bosnian media have dedicated to it during the last months, Esad Duraković, professor of Arabic literature and philology, expressed his concern to the network N1 : "The ongoing process should be seen as a deliberate strategy whose final effects will be seen in the long run, and there is the risk that the outcomes may be acknowledged when it is already too late [...] This is not about productive investments, nor is it a matter of tourism. The fact is that the best resources of this country are being sold to foreign citizens [...] The income generated in the short term by tourism should not obscure the long-term consequences: it is not only tourists who visit the country for a few days, but foreign citizens establishing a permanent presence on their own lands in Bosnia and Herzegovina."