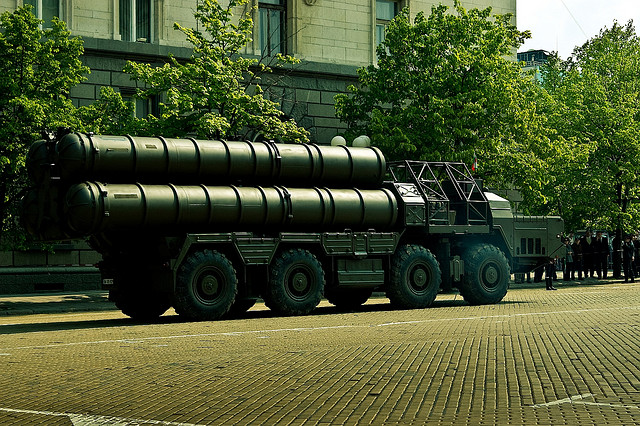 Azerbaijan’s parliament on October 22 approved a military budget of 2.5 billion manats, or about $3.12 billion. That figure is higher than the entire state budget of Baku’s neighbor and longtime foe, Armenia. From EurasiaNet.org

Azerbaijan’s parliament on October 22 approved a military budget of 2.5 billion manats, or about $3.12 billion. That figure is higher than the entire state budget of Baku’s neighbor and longtime foe, Armenia.

Experts in Baku believe the spending surge is designed to send a message to both Armenia and the international community: if efforts to reach a peace deal on the Nagorno-Karabakh territory remain stalled, Azerbaijan could again resort to force in an attempt to settle the conflict. Experts in Baku are quick to emphasize, however, that despite the massive increase, there are no concrete signs that suggest Azerbaijani leaders are actively planning for a resumption of warfare.

The military budget received near-unanimous backing in parliament, passing by a vote 104-5 vote. Defense spending will account for about 20 percent of the government’s total expenditures of 12.5 billion manats (roughly $16 billion) in 2011. That represents nearly a two-fold increase in defense outlays over 2010, according to Finance Minister Samir Sharifov. The overall government budget for 2011 rose only by 5 percent over this year’s state spending total.

The defense appropriation was seen as an important milestone, fulfilling a 2007 prediction by President Ilham Aliyev that Azerbaijan’s military spending would soon outstrip Armenia’s entire state budget. Armenia plans to spend 139 billion drams, or about $386 million, on its defense sector next year, out of a total budget of 998.4 billion drams, or about $2.8 billion.

At an October 20 cabinet meeting, President Aliyev did not conceal his satisfaction with Azerbaijan’s fiscal might, created by the county’s abundant energy resources. “At present, the Azerbaijani army is the strongest and most battle-worthy in the South Caucasus,” he declared, local news outlets reported. “In 2011, our military spending will be more than Armenia’s whole state budget. But we will not stop here. We plan to increase our defense spending further.”

“Unlike Armenia, we use our own money. We do not depend on any country, we have no debts to any country and we are not begging anyone,” Aliyev continued, making a not-so-tacit dig at Armenia's strategic relationship with Russia.

Officials in Baku are not divulging how exactly Azerbaijan’s Defense Ministry will spend all the money. Finance Minister Sharifov told parliament that 1.4 billion manats (about $1.75 billion) will be spent on modernizing the Azerbaijani armed forces and purchasing new armaments. An additional 1.87 billion manats (about $2.33 billion) will go to “special projects aimed at increasing Azerbaijan’s military potential,” he added without elaborating. The Ministry of Defense Industry, which operates separately from the Ministry of Defense, will also see its budget increase, Sharifov added, but he did not provide numbers.

One military expert cautioned that spending big does not necessarily mean spending effectively. No precise information exists about what arms will be purchased with the 1.4 billion manats, noted Jasur Sumarinli, editor of the Milaz.info military news portal. Citing unnamed Defense Ministry sources, Sumarinli said that he had been told that “about 600 million manats [about $749 million] from this will be spent to buy two S-300 anti-aircraft systems from Russia, [armaments that] would not have much practical use in the case of a Karabakh war.”

The S-300, the rough equivalent of the US Patriot missile defense system, is generally meant to protect strategic assets such as oil rigs and pipelines.

At present, talks aimed at resolving the Karabakh conflict, held under the auspices of the Organization for Security and Cooperation’s Minsk Group, are stalemated. The last meeting between Aliyev and Armenian President Serzh Sargsyan, held in June, failed to break the logjam.

Over the past several years, Aliyev has repeatedly indicated that Baku’s patience with the years of start-and-stop negotiations with Armenia is wearing thin. Of late, verbal sniping between the Azerbaijani and Armenian governments has picked up. Both presidents in mid-October, for example, publicly referred to the other side’s alleged state-sponsored “fascism.”

Baku-based political analyst Rasim Musabekov believes Azerbaijani leaders are hoping the defense appropriation exerts pressure on Armenia to make political concessions in the Karabakh peace talks. A special OSCE mission is scheduled to release a report in a few days about the situation in Armenian-occupied territories adjoining Karabakh.

“Baku wants the mediators to understand that, with such a pace of defense spending, Armenia’s military defeat would become inevitable in a few years,” Musabekov commented. “Thus, if they do not want it to happen, they should speed up the peace talks.”

Shain Abbasov is a freelance reporter based in Baku. He is also a board member of the Open Society Foundation - Azerbaijan.