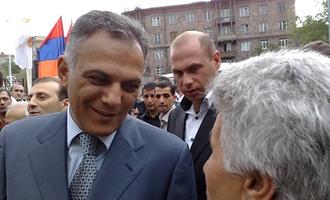 Gagik Beglaryan, the first elected Mayor of Yerevan, has resigned after reportedly assaulting a member of the presidential administration’s protocol department. At the same time, a number of other high level officials have been changed in a rare cabinet reshuffle

In a surprise move earlier this month, the controversial Mayor of Yerevan, Gagik Beglaryan, resigned after reportedly assaulting a member of the presidential administration’s protocol department. Better known to many residents of the Armenian capital by his notorious Chorni (Black) Gago nickname, Beglaryan apparently beat Aram Kandayan after the latter instructed the former’s wife not to sit next to the Armenian President, Serge Sargsyan, during a concert held in Yerevan by world-renowned Spanish Opera singer Placido Domingo on 3 December.

Seats at such events are usually reserved for the head of the Armenian Apostolic Church or other more important members of government such as the Prime Minister. Even so, Beglaryan apparently felt offended enough to punish Kandayan. Press reports allege that the presidential administration staff member was taken to an undisclosed location and assaulted. Presidential press secretary Armen Arzumanyan confirmed that an incident did take place, but that the media exaggerated the precise circumstances. An official apology was anyway requested from Beglaryan.

“The President of Armenia has repeatedly expressed his attitude towards similar incidents,” Arzumanyan told reporters. “Such behavior is unacceptable and intolerable.” Meanwhile, some media outlets reported that Beglaryan was advised to temporarily leave the country after his explanation and regret was considered inadequate. Some of those reports also suggested that Beglaryan might have traveled to Italy. The ruling Republican Party, of which the former Mayor is a member, told journalists that they were unaware of his whereabouts.

Other reports speculate that a criminal case might even be brought against him.

Beglaryan became the first elected Mayor of Yerevan, albeit in a vote by a city council, after a municipal election held at the end of May last year. The opposition criticized the vote as fraudulent while also accusing Beglaryan of long being responsible for violent attacks against their activists over the past few years, including during his time as head of the city’s central administrative district. Following his resignation, apparently under presidential pressure, the ruling Republican Party of President Sargsyan nominated Karen Karapetyan, Chief Executive of ArmRosGazProm, for the vacated position last week.

Coincidentally, at the same time, a number of other high level officials were changed in a rare cabinet reshuffle. Minister of Economy Nerses Yeritsyan was relieved of his duties and Minister of Finance Tigran Davityan appointed in his place. Hrayr Tovmasyan was also appointed as Minister of Justice following the dismissal of Gevorg Danielyan on 9 December for another violence-related incident. The presidential office accused Danielyan of inadequately performing his official duties when he failed to punish a subordinate for assaulting another ministry employee.

Cynics dismissed the changes as an attempt to deflect attention away from the failure of the A1 Plus channel to win the latest tender for a new broadcasting frequency last week. Human Rights Watch condemned the decision which continues to keeps the pro-opposition television station off the air. A1 Plus lost its license to broadcast in early 2002 in what many consider to be a political decision timed to specifically prepare the environment for then Armenian President Robert Kocharyan’s controversial re-election the following year.

Nevertheless, others are more hopeful and consider that the replacement of key officials as part of a wide-ranging policy by Armenian Prime Minister Tigran Sargsyan. The former head of the Central Bank of Armenia is seen by many as a genuine reformer, albeit constrained by the current oligarchic system of governance that critics allege remains in place. In November, for example, Sargsyan publicly accused several top officials of mismanagement and dismissed others working under them. He explained last week’s reshuffle as being aimed at promoting further reform.

Likewise, for many observers, Beglaryan’s resignation is also seen as positive.

Although the victory of Karapetyan in the majority government-controlled city council vote last Friday came as no surprise, with 50 votes for and only 1 vote against, even some government critics appeared cautiously optimistic. As chief executive of the Armenian-Russian gas distribution network, Karapetyan is known as a good manager. Indeed, in his first official remarks, while the 47-year-old expressed his gratitude to the Armenian President and his governing party, he also promised to introduce a new municipal culture to satisfy city residents.

Naturally, the extra-parliamentary opposition Armenian National Congress were more skeptical and critical, declaring that they still considered the Mayor and the City Council to be ‘illegitimate’ and not elected by the people. Nevertheless, former Human Rights Ombudsperson Larissa Alaverdyan, now a member of the parliamentary opposition Heritage faction, was more optimistic. “I hope that the negative public relations that existed before [between the municipality and city residents] will come to end,” the local media reported her as saying.

For his part, Karapetyan said that he would not dismiss existing personnel at the Yerevan Municipality. “There are no plans for massive dismissals for now,” he said at a press conference after being chosen as Mayor, “but there will be stricter rules and requirements for the heads of district administrations, and only those who comply with them will remain in office.”