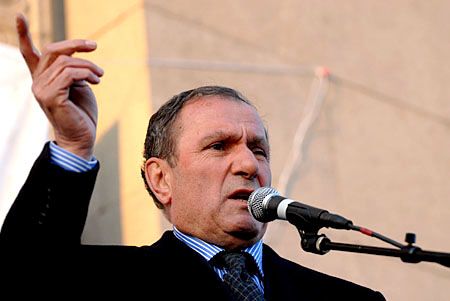 Levon Ter-Petrossian, the first president of independent Armenia, will participate in the municipal elections of the Armenian capital to be held on 31 May. Amid fears of election rigging, with both sides convinced of their own sweeping victory, the opposition hopes to weaken the legitimacy of president Sargsyan

The announcement that former president and extra-parliamentary opposition leader Levon Ter-Petrossian intends to run for Yerevan Mayor was unexpected, but not surprising. Previous presidents, including Ter-Petrossian himself, had resisted earlier calls to make the position an elected one, fearful of the economic and political power such an official would possess.

In November 2005, however, demands from the Council of Europe forced the authorities to amend the constitution in order to bring it into line with European standards. One key provision was to allow residents of the capital to elect the city head. Over three years later, the necessary changes to the electoral code and new legislation were introduced and are now in force.

Although not directly elected by residents, the mayor will be determined by a new 65-seat council to be elected under a proportional system of voting on 31 May. Despite its inactivity in recent months, speculation that Ter-Petrossian's opposition movement would contest the vote had been growing since earlier this month when it announced its next rally would be held on 1 May.

Even so, most residents remained resigned to the likely victory of the ruling Republican Party of Armenia (RPA) candidate, Gagik Beglarian. More commonly known as "Chorni (Black) Gago," when Beglarian stepped down as the city's Kentron district chief on 4 March to replace the previous mayor, Yervand Zakarian, the move simply confirmed such speculation.

However, most observers believe that Ter-Petrossian's participation in the municipal election now makes the outcome more difficult to predict. Moreover, some analysts predict, the decision also suggests the start of renewed efforts to challenge the legitimacy of the authorities following last year's bitterly disputed presidential election.

Although Ter-Petrossian lost to the current president, Serge Sargsyan, in the 19 February 2008 vote, many believe that the incumbent did not attract enough votes in the first round. As a result, nearly two weeks of street protests followed until 1 March when the tense post-election standoff ended in clashes which left 10 dead and a 20-day state of emergency declared in the country.

In a written statement issued on 17 March, Ter Petrossian's Armenian National Congress (ANC) officially announced its decision. "With this move, we are sending a very clear political message to society. We regard the election of Yerevan's mayor as a very serious opportunity to change the existing dictatorial system and ... as a second round to the 2008 presidential elections," it read.
"This will be a struggle for lawfulness," added ANC office coordinator Levon Zurabian during a press conference held in Yerevan the same day. "We have come to combat this tyrannical, criminal and oligarchic system to establish democracy in the country. This will not be a struggle against Beglarian -- our main rival is the regime."

In response, the RPA has been quick to accuse the extra-parliamentary opposition of planning to use the municipal vote to ignite a new series of street protests aimed at enacting regime change. "We won't allow the opposition to organize disturbances and provoke another '1st of March'," said RPA deputy leader Razmik Zohrabian the following day.

But, with two reports from Human Rights Watch and the U.S. State Department criticizing the government's handling of last year's post-election unrest, it is unlikely that it could survive any potentially embarrassing crackdown either. Moreover, in a rally to mark the first anniversary of the 1 March disorders, Ter-Petrossian also ruled out hopes among his supporters for a "popular uprising."
"The old-fashioned ideas of revolution or uprising must be finally driven out of our country's political agenda," he told a crowd of between 10-20,000 people. "As long as that hasn't happened, Armenia can have no chance of becoming a rule-of-law and democratic state. History knows virtually no revolutions that engendered democracy and welfare."

Instead, with the recent collapse of the dram adding to existing political tensions in the country, the opposition hopes public discontent will turn the election into a vote of confidence in the authorities. As a result, many suspect the pre-election campaign will be tense, with vote-buying and other electoral code violations defining the campaign period as well as polling day itself.

Given dwindling attendances at previous rallies and demonstrations, it is uncertain whether Ter-Petrossian can attract enough votes to win outright, but there are few who believe Beglarian can sweep to victory either. Indeed, it is for this reason that the head of one international organization monitoring elections in Armenia says that the new legislation is cause for some concern.

"The law specifies that if political party receives more than 40 percent of seats on the city council, but does not have the absolute majority, then extra seats are automatically allocated to it at the expense of others," the source told Osservatorio Caucaso on the condition of anonymity. "This 'bonus system' under local circumstances is extra leverage to gain absolute power."

"The motivation for this becomes clearer if we look at the results of the National Assembly election in 2007 when the Republican Party received only 33 percent of votes through the proportional system," he explains. "Basically, after the events of last year the ruling party can no longer manipulate the results of elections as obviously as before."

Meanwhile, in the hope that forming a united front could counter the administrative resources at the disposal of the incumbent, discussions to form an electoral bloc between the ANC and the parliamentary opposition Heritage party had been underway. On 17 March, however, Heritage spokesperson Hovsep Khurshudian informed journalists that talks had collapsed.

Regardless, the 31 May election looks likely to be the first real test of Armenia's fledgling democracy since last year's disputed and highly controversial presidential election. However, with both sides convinced of their own sweeping victory, Yerevan looks set to experience yet another potentially volatile period along its path to democracy.