Armenia: the war in Nagorno Karabakh and assisted reproductive technology 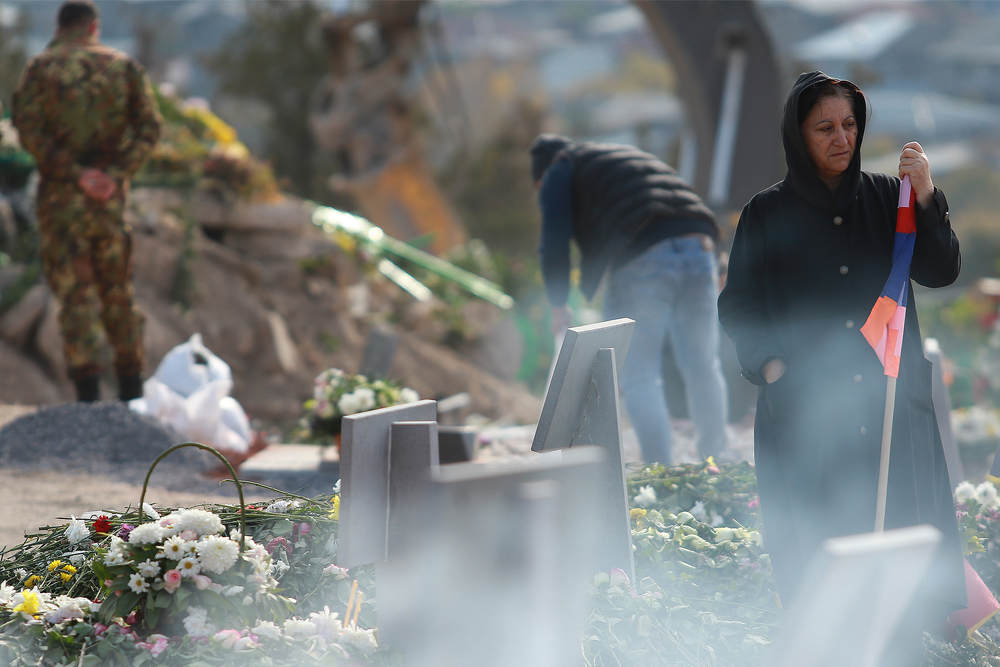 November 22, 2020, a woman attends the funeral of a soldier who fell in the conflict in Nagorno Karabakh in Yerevan - © Gevorg Ghazaryan/Shutterstock

In Armenia, mothers who lost a child in the recent war in Nagorno Karabakh will have access to a special assisted reproductive technology programme

“I had a son. He was my life, my sunshine, my happiness. We were very young when we got married and became parents. Then, for a few reasons, we did not have a second child. The war took my one and only”. Anna, 46 (the name was changed at the woman's request), struggles with words as she tells about her son, who died 6 months ago.

She swallows her tears, tries to find her breath, and keeps talking: “I feel infinite emptiness, no one can take his place, but we must try to live, though I don't know how”.

Anna's son died in September 2020, during the Artsakh war. Artsakh, better known as Nagorno-Karabakh, is an unrecognised state in the South Caucasus. From September 27 to November 10 last year, military operations took place between Nagorno-Karabakh and Armenian forces and the army of Azerbaijan, which killed thousands of people on both sides.

For 6 months Anna has been struggling with her life, even thinking about suicide.

“My son was only 18 years old. He dreamt of becoming an architect. He would build cities in his mind, plan buildings, and first thing he was going to build our house. I had a very smart son: I do not say that as a mother, but objectively. Having long conversations with him in my mind after he died, thinking about the future of my country, I realised that my son would not want me to die. Instead of dying, I have to be strong; I have to have new children to make my son's dreams come true with them. True, no one can replace my son, but he would definitely agree if I had another child”.

Anna will soon undergo the necessary medical examinations. She is gradually preparing to become a mother again. She is going to benefit from the new decision of the Armenian government, allowing parents who lost their sons in the war to access the state IVF (in vitro fertilisation) programme.

So far, the programme was only available to women under 42, but most mothers who lost their sons in the war are older than that. Therefore, the age limit was raised to 53.

Minister of Health Anahit Avanesyan stresses how a new group of beneficiaries was created considering the desire of parents who lost their sons to have other children in the post-war period, as well as the importance to provide state support in this regard. In the past, the programme was available to residents of the border areas, soldiers, and people with disabilities as well as citizens included in the family benefit system.

“The usual requirements include being childless, being registered in the Civil Acts Registration bodies in accordance with the law, and the woman being under 42. This does not apply to parents of a son who died as a result of participation in hostilities during and after the war. The programme will provide an opportunity for parents to find themselves once again through assisted reproductive technology”, noted Avanesyan during the discussion in a government session.

In 2020, 49 embryos were implanted within the framework of the programme; 44 in the first quarter of 2021. 917 million drams (approximately 1,457,000 Euros) were allocated for the implementation of the programme, 3 times more than last year.

According to Eduard Hambardzumyan, President of the Armenian Society for Reproductive Medicine, doctors began to think about creating this opportunity after the end of the war. “When parents who lost their sons started to apply to us, we realised that we had to take steps. They want to be parents again. And it is a heroic step. These people should be an example for all of us, we should look forward, reproduce, strengthen the state”.

“Few in our neighbourhood know that my husband and I have such a plan. Sometimes I get upset about my age. I think that being a mother at this age is not so right, but on the other hand I am confident. Moreover, I must be an example for others. Now I pray God to give me enough health and let me become a mother and have a normal pregnancy”, says Anna, adding that, if she can, she will have another child.