Armenia, a campaign to end violence against children 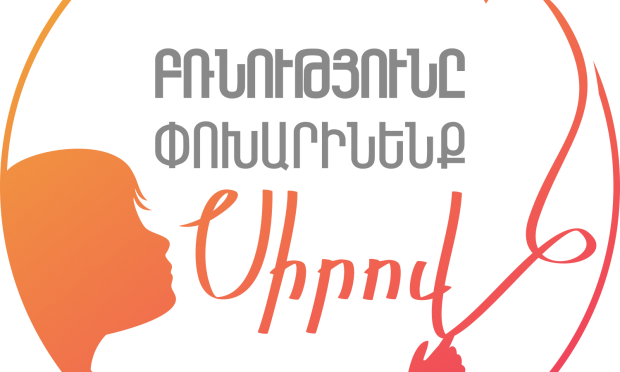 One of the images of the campaign

NGOs in the country have launched a five-year campaign to counter violence against children, which is widespread

According to a recent survey by World Vision Armenia , 39.7 per cent of parents use physical violence as a means for punishing children. This finding is confirmed by the Demographic and Health Survey, published by the National Statistical Service and by the Ministry of Health in 2016, which shows that "seven out of ten children of 1-14 years of age have been exposed to a psychological or corporal punishment in the 30 days before the survey". According to these data psychological aggression is more prevalent than physical violence: more than two thirds of children (65 per cent) have been exposed to psychological violence, while 38 per cent have been victims of a form of corporal punishment.

The numbers reflect prevailing public norms and behaviours in Armenia, where parents believe that corporal punishment will ensure that their children will behave well, will be be obedient and will do well in school. Indeed, many Armenians believe the words of an old popular song which says "The one who was never spanked by his mother, was raised as an orphan".

"In Armenia, the most important step to succeed with our campaign is to have the general population and the politicians accept that this is a real problem," said Zhirayr Edilyan, the Country Program Director of World Vision Armenia. Therefore, the campaign advocates for the reform of existing legislation, to ensure the effective operation of the child protection system and for the creation of comprehensive rehabilitation services for the children exposed to violence. This NGO-led campaign also aims for extensive partnerships with state agencies and the police, as well as for the engagement of the donor community and the business sector so that companies include this as a priority on their corporate social responsibility agenda.

On the occasion of the launch event on September 26, the Police Colonel Nelly Duryan, Head of the 3rd Department of the General Department of Criminal Intelligence of Police, said: "This is a very important process and the government cooperation is crucial so that we can ensure successful results by the end of the campaign." She was echoed by the Deputy Minister of the Ministry of Justice of Armenia, Souren Krmoyan: "The Ministry of Justice, prioritising child rights protection and prevention of violence against children, is ready to cooperate and support the child rights protection initiatives in all platforms." Souren Krmoyan also announced that the Armenian Government is interested in joining the Global Partnership to End Violence against Children  as a pathfinding country. To this aim, the support of the national and international civil society organisations is sought, so that Armenia can successfully become one of the leaders of this global movement.

What is equally remarkable is that this initiative is one of the first ones in Armenia to start off with a very strong, almost unprecedented, partnership with several media organisations (TV, radio and online media), while children themselves have been involved in designing the campaign activities. "We wanted to avoid the classic NGO-led campaign, where all decisions are made by child protection specialists, rather than media experts and the children themselves. By involving them from the very beginning we hope to have a much deeper insight into the targets of the campaign, as well as innovative ideas," said Zhirayr Edilyan.

"I am so excited that we decided to work with simple, popular methods. This  pop song with a rap piece on sharing love, not violence, is already a hit. Exactly what we needed as we think that a popular song can have an incredible effect in changing people’s opinion, or at least make them think, before they raise their hand to spank their child next time," said Aida Muradyan, a Child Protection Programmes Manager, on behalf of the entire NGO group.