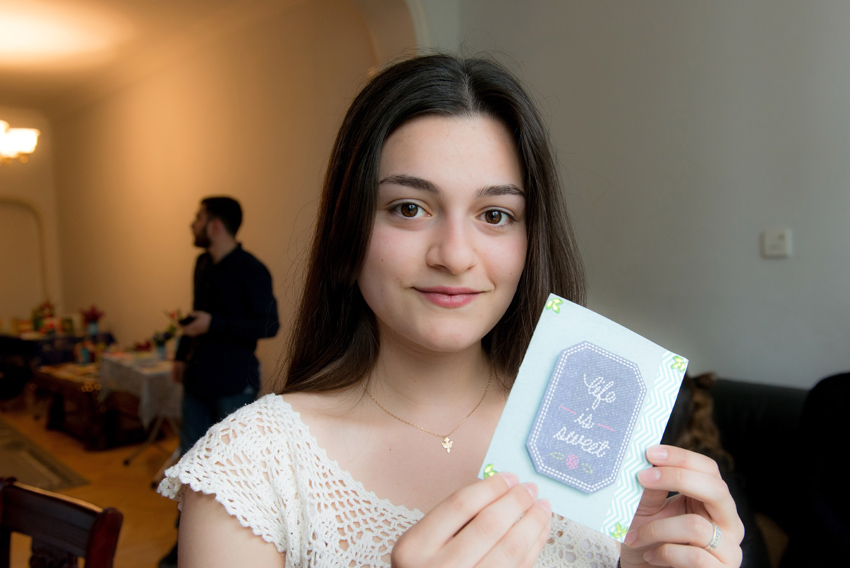 In Georgia there are many care services for beneficiaries below the age of 18, but problems really emerge once they become adults. Georgia’s ChildPact members address this issue, working with the authorities to find long-term solutions

Darina Eradze was just eleven-years-old when her mother had no other choice but to place her in care.  After years of living with a father with psychological problems, Darina says that her older brother and herself were beaten on an almost daily basis. Things became even worse when after putting their house down as collateral for a business loan, he lost it and the family was evicted. Her father would sleep in parks while Darina and the rest of her family would seek out abandoned buildings.

Today, Darina, now aged 19, is a confident and intelligent young woman thanks to the support of various Non-Governmental Organisations (NGOs) that make up ChildPact’s member in Georgia, the Georgian Coalition for Children and Youth. The coalition was formed in 2012 and today, fifty NGOs make up the network. Darina is especially grateful to the Caritas and Our Home Georgia NGOs as well as the Natakhtari Foundation, a fund for charitable causes established by one of Georgia’s main drinks companies.
“When I was 15, I started to think about what to do in life and decided to study psychology,” she explains. “But, when I reached 18, I couldn’t live with Caritas anymore so Our Home Georgia and the Natakhtari Foundation covered the cost of the rent of a flat for the first year. They also paid for a tutor in mathematics. Now, another NGO helps me, but without that first assistance I would not be able to study to become a professional psychologist in order to help children with similar backgrounds and problems.”

Indeed, those involved in child protection issues in Georgia note that, while there are many care services for beneficiaries below the age of 18, problems really emerge once they become adults. Moreover, explains Darina, stereotypes persist. “Some parents don’t even want their children to study with those from institutions,” she says. “I want to change that opinion and help children find their place in society.”

Despite those lingering stereotypes, Georgia has nonetheless made remarkable progress in terms of reducing the number of children living in large residential institutions from over 5,000 in 2005 to a few hundred today. The number of state-run institutions was reduced from 49 to 3 and there are instead 930 children in foster care, 340 in small group homes, 340 in institutional care, and also some who are enrolled into institutions run by the Georgian Patriarchy. Even so, a Georgian Coalition on Child and Youth Welfare report noted that every year some 35-45 children turn 18 each year and find themselves without social support, educational opportunities, permanent residence, or employment.

With many NGOs aware of this problem, and some offering services for children and young adults such as Darina, this is also an area that Georgia’s ChildPact member is keen to address, working with the authorities to find long-term solutions. The Georgian Coalition for Children and Youth is a perfect network to do just that.

Marina Menteshashvili is a Project Manage for World Vision and a member of Georgian Coalition on Child and Youth Welfare’s working group on Leaving Care, one of four key themes the network focuses on. The problem, she says, is significant because when children leave care they are often ill equipped with the necessary life skills and social networks to live an independent life. “There is the risk that some could turn to theft and prostitution while others are at risk from illegal activities such as trafficking,” she says.

And there is hope on the horizon

SOS Children’s Villages Georgia, another member of the ChildPact-affiliated Georgian Coalition on Child and Youth Welfare and chair of the network’s Leaving Care thematic group, is particularly prolific in this area. Over sixty percent of the children in their care have received vocational training with 34 percent entering higher education as adults. And although the employment rate for care leavers is 42 percent, 26 percent have an income over the minimum wage. Only 17 percent live in inadequate accommodation.

Our Home Georgia, established in 2011, is also working tirelessly to achieve the same, and particularly in cooperation with the Natakhtari Foundation which last year raised GEL 161,313 (€67,522) from the sale of its lemonades to support 163 adolescents.
“Natakhtari decided to make social responsibility a priority and contacted us for consultation,” says Our Home Georgia’s Manana Omarashvili. “They asked us what is the main gap in the child protection system and we responded by developing the concept of independent living and suggested it to Natakhtari. They liked it and we started to work together. We’re now supported by them and provide services to children aged 15-18 who live in small group homes as well as those who have left and are adults.”
“This is vital,” Omarashvili continues, especially as there are still no legal provisions for the organisation of after-care services or support for care-leavers. “After state care is over, children who lived in small group homes or with foster families need support.They’re not ready for independent living. They need professions, accommodation, and social skills.”

Says Mirela Oprea, ChildPact’s Secretary General, "creating a national framework to improve this situation is exactly what the coalition is working on. The Georgian Coalition for Children and Youth is still quite young, but we believe that talking with a unified voice gives more strength to civil society organisations working in this field and will lead to positive changes across a large number of policy areas.”