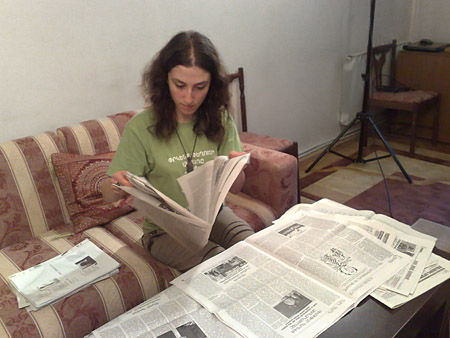 Mariam Sukhudyan, a local environmental activist, faces up to 5 years imprisonment after alleging cases of child abuse in a Yerevan boarding school. This seems to be part of a growing trend of governments in the region targeting youth activists

Mariam Sukhudyan is an environmental activist that recently fought against the cutting of the Teghut forest in the north-east of Armenia. She has previously been a volunteer in a boarding school, and she now faces up to 5 years imprisonment for being part of a group of volunteers alleging that staff at the Nubarashen #11 specialized boarding school in Yerevan, the Armenian capital, routinely mistreated children in their care. A teacher was accused of sexual abuse by at least two children with the allegations forming the basis for a special report broadcast on the main Armenian Public TV last November.

"According to the children's accounts, they are subjected to beatings and other forms of physical punishment," the group wrote in a joint statement posted online. "We personally witnessed needlessly harsh treatment of children by teachers and night guards. The school director and other administrative workers use children as a free labor force in their homes and summer houses," continued the statement signed by Sukhudyan and eight others.

For those with experience of Armenia's dilapidated Soviet-era boarding schools, such allegations are unlikely to raise many eyebrows.

Since independence, such institutions remain the main depository for children with learning or physical disabilities as well those from socially vulnerable families. Conditions are sub-standard and directors receive funding on a per-capita basis. Thus, critics of the system argue, staff oppose plans supported by international organizations to return children to their biological parents, place them in foster care, or to integrate them into mainstream education.

Although the number of children enrolled in such schools has declined from 12,000 to 5,000 in recent years, children from extremely poor families are still known to attend in order to receive food and, in some cases, clothing donated to the institutions. At one specialized boarding school for the blind and visually impaired in Yerevan, for example, 60 percent of children have no problems with their sight.

"With the declining level of services in residential institutions, the current trend is creating an underclass of children marked by poverty, stigmatization and a lack of proper care and education who are likely to lack opportunity as adults," reported the World Bank in 2002. "To the extent that such children end up in institutions for the mentally disabled, which offer only a special education syllabus for children with mental disability, their development will be seriously hampered by lack of educational opportunities."

Speaking to Al Jazeera English last week, World Vision Armenia's Child Protection Officer Kristine Mikhailidi went even further, noting that regardless of which children attend, conditions are of significant concern. "Physical abuse is always there. They are yelling, they are beating on these kids and all these things are happening. Closed facilities, no interaction with the other society, no one is coming in, they don't have skills to work with these kids - all this brings to an abusive situation."

Nubrashen's staff refutes such criticism, although the teacher accused of sexual abuse resigned soon after the allegations were made. "They are lying," Donara Hovhanissyan, Nubarashen's Head of Education responded when asked by Al Jazeera's Matthew Collin about Sukhudyan and her colleagues. "Because they were so young and inexperienced, they didn't understand that every child here has mental disabilities and very active imaginations. It's very easy for them to make something up."

Nevertheless, although she admits she never witnessed any sexual abuse in Nubarashen, Sukhudyan stands by the accusations made by the children. "This little girl who was speaking about serious sexual abuse was terribly distressed; she was in such a state that I was saying we shouldn't ask any more questions because she was in such emotional distress." she told Collin.

However, while police did open a case based on the accusations aired by Public TV, they eventually turned on Sukhudyan in August this year just as her environmental activities increased. The 29-year-old now faces up to five years in prison on charges of false denunciation while her supporters believe that the action is part of a growing trend of governments in the region targeting youth activists.

At the beginning of July extra-parliamentary opposition youth activist Tigran Arakelyan was arrested and placed in two months pre-trial detention on charges of hooliganism, a fate which also met video in neighbouring Azerbaijan the following week. But if the case in Azerbaijan made headlines the world over, that against Arakelyan in Armenia was largely ignored. That might, however, change with Sukhudyan.

Sukhudyan has no links to any political party, government or opposition alike, and is better known as one of the main environmental activists protesting plans to mine copper and molybdenum deposits in the north-east of the country at the expense of local forests. Conveniently, while police investigate the charges against her, the activist is confined to Yerevan and is unable to continue her environmental activities outside the capital, and especially in Teghut.

"I can't help but link this case with Teghut because I'm not the first activist to be subjected to such pressure," Sukhudyan told RFE/RL last month. "This may be a good opportunity for the authorities to break our movement and force me to shut up."

Certainly, the fact that Sukhudyan is the only one of many alleging abuse in Nubarashen to be investigated by police raises many questions and a number of civil society activists and organizations have already condemned the case against her. "It looks like active citizens are not encouraged in our country," Sona Ayvazyan, a specialist at the Armenian affiliate of the international anti-corruption watchdog Transparency International, told RFE/RL last month.

"The authorities seem to be trying to eliminate such citizens one by one. Mariam is simply the latest victim, and we don't know who will be the next."

Last week, the author worked with Al Jazeera English's Matthew Collin on a news report for the satellite TV station on Mariam Sukhudyan and Nubarashen #11. The report aired on 13 September 2009.