Looking for the Albanian route 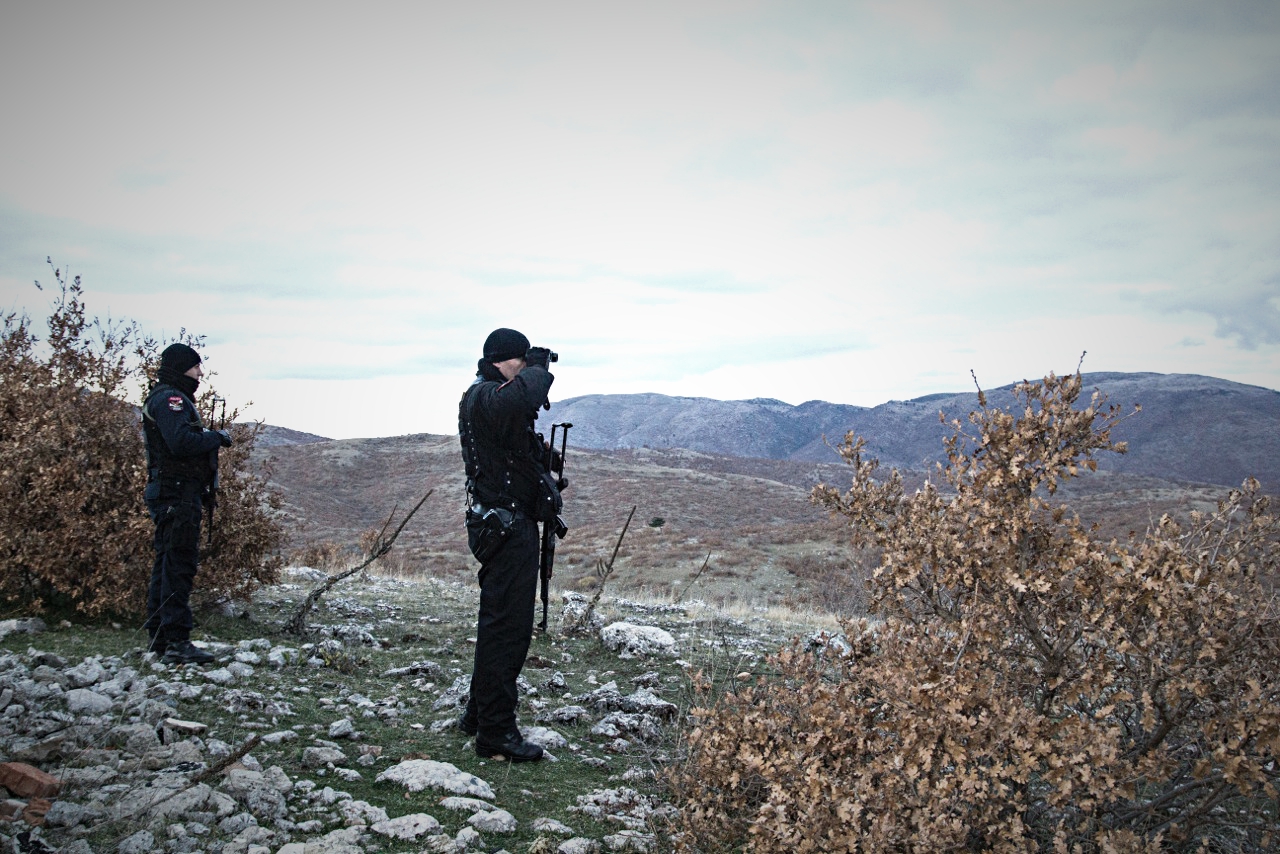 A still landscape of clay, low trees, and white rocks. Albania looks with apprehension at its southern border, increasing patrols should any refugee appear. A report

Shrub, shrub, sheep... Binoculars in hand, an agent of the Albanian police special forces carefully scrutinises the hills that mark the beginning of Greek territory. Before his eyes, clay, low trees, and white rocks barely react to the intermittent gusts of wind.

Between vegetation patches, the Tirana authorities fear the opening of the so-called "Albanian route", a new migration route that would lead the thousands of refugees stranded in Greece to Albania (and perhaps Italy). The Kapshticë heights, now wrapped in blissful silence, are constantly monitored from the Albanian capital, as this – explain the police – is the nearest border crossing point from the Idomeni camp.

"The question is not whether refugees will get to Albania, but when". It is almost eleven p.m. in Tirana. Saimir Tahiri, Albanian Interior Minister, drops into the leather chair in his office at the Republican Guard, the yellow tie abandoned on the desk. "It's been a long day. As long as landings in Greece continue, it will be a matter of days or weeks – it is normal, it is human that these people seek another way. What is certain is that, when this happens, without a common solution there will be problems not only for Albania, but for the whole of Europe".

Waiting for a "common solution" that has been missing since the "refugee crisis" began more than a year ago, Tirana is taking its measures. On the one hand, it is preparing for the "official" route possibly being diverted, as happened to the northern route following the closure of the Serbian-Hungarian and Croatian-Hungarian borders in the last months of 2015. On the other hand, it will intensify controls to prevent traffickers from anticipating European chancelleries and leading refugees through Albania and, probably, the Otranto channel. The first scenario includes dense diplomatic discussions and humanitarian contingency plans; the second, exchange of information between police forces in the region and, above all, strengthened controls at the Greek-Albanian border.

Thousands of migrants and refugees are escaping conflicts and violence. They try to cross the Balkan peninsula to reach the EU. News and reports in our dossier

On the possible opening of a new route in its territory, Albania has a clear policy, which can be summed up more or less like this: Tirana will not close the borders before an influx of refugees, but expects Europe's support to manage the transit of people, who cannot remain on Albanian soil except for a short period (given the country's apparent lack of resources). This is, however, a paraphrase necessary to explain the otherwise enigmatic position expressed by Glevin Dervishi, spokesman of the Albanian Foreign Affairs Minister. "The border will not be closed, but it will not be open", spoke a nonchalant Dervishi, probably oblivious to the constraints of logic. Albania, it must be inferred, "will not lift walls", as indeed assured by Prime Minister Edi Rama, but does not welcome refugees either – not least because, as we shall see, the country is not at all ready to host them.

"Whatever the number of people we can accommodate, it will never be enough", replied Interior Minister Tahiri to the question: "How many refugees can Albania receive at this time?". According to information from the Albanian press, two "camps" have already been identified by the government near Korçë and Gjirokastra, in the south of the country. "Two barracks in ruins", said a European diplomat stationed in Tirana, while UNHCR representative in Albania Marie-Hélène Verney assures that "today the country could not accommodate even five people". According to the plan drafted by Verney, the UN agency and the local authorities will still be able to manage a flow of 1,000 people, but only for five days – then, they will need more people and more resources.

This first scenario is giving rise to various rumours, reported in the Albanian press. Is Athens pressuring Tirana to accept several thousand refugees? Is Italy pushing in the opposite direction, to the point of annoying Greece? Albanian government representatives categorically deny both claims, although the Greek press reported that a group of 162 refugees has already moved to Konitsa (12 km from the Albanian border) and Italian Interior Minister Alfano announced a visit to Tirana in the coming days...

Albanian authorities, on the other hand, have no trouble sharing information about control measures of possible new routes created by criminals networks. In the next few days, based on an agreement between the Ministers of Interior of Tirana and Rome, Italy will provide a number of men and means (twenty agents, according to press sources) to better monitor the border with Greece. Similarly, Minister Tahiri ordered special police forces to work alongside local patrols along the green line (according to the press, 450 additional people will be deployed on the approximately 300 km of border).

From Tirana, it takes three hours to reach this suddenly guarded land. The road crosses Albania's diverse rural landscape, between white silhouettes of blooming cherry trees and rusty domes of abandoned bunkers. At the border, the commander of Kapshticë border police, Ermal Zeka, sits in his office next to a hot stove. On his computer, he scrolls through the images from the hidden cameras along the 57 kilometres of border that fall under his responsibility. "This one we stopped a few days ago", says Ermal, indicating a person photographed in the trees. "He is Albanian, he worked in Greece for more than three months without applying for a work permit and therefore intended to return illegally". "This one, well, no, we did not stop – he lives nearby", says the agent while the screen displays a shepherd surrounded by a flock of sheep.

"You think that Albania lacks the necessary technology, but in fact we have everything we need", smiles the official, originally from Tirana. A scanner for fingerprints and a connection to the Interpol database allow to verify the identity of passers-by, even if undocumented. What are the orders in case you come across a refugee? The commander shows the forms in Albanian and Arabic. "Our task is to identify everyone. Whether they are going to asylum or not, detainees are then sent to Tirana, where they complete procedures and, if necessary, repatriated". There are no direct repatriations from the Greek-Albanian border.

Anyway, Ermal's daily life has changed considerably over the last two weeks, not only with the arrival of the special police departments (initially 50 people) that "have practically doubled patrols available", but also because of closer contacts with Greek authorities and international organisations.

"My days begin with a meeting with my Greek counterpart, who informs me of any movement, while the IOM [International Organization for Migration, ed.] calls me every morning at 8, Monday to Sunday", says Ermal, spreading his arms.

After visiting the police station, we leave on a jeep for the green line. The rest of the team is already near the memorial stone on which are carved the letters "A" (Albania) and "E" (Ellada, Greece). The reinforcements sent by Tirana are equipped with Kalashnikovs and bullet-proof vests, while the locals only have a gun. All stroll up and down with the same bored demeanour, looking from time to time at the barren hills a few hundred metres away, but sightings in the binoculars are always the same: shrub, sheep, shrub... The shift lasts twelve hours, at night it gets cold quickly. Those who take over wear a night vision device, because the jeeps must be driven with the headlights off. "As of now, only the driver has a night viewer available, the others will have to trust him!", laughs Ermal, then he adds: "You know, I do not think they will pass through here. Two-thirds of the border are covered by mountains or dense forests – if you get lost, you'll never find your way again".