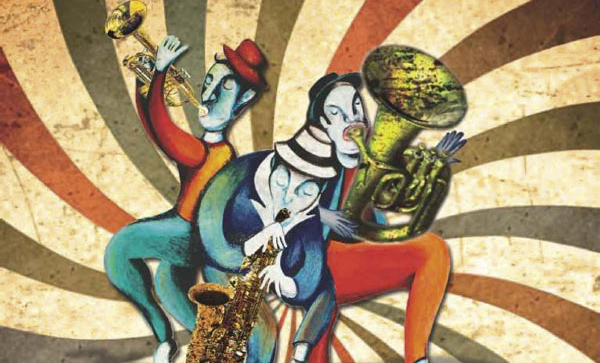 Though certainly more funky and jazzy in their arrangements than their great-grandparents, Fanfara Tirana have in fact revived brass tradition in Albania. And they made it out in the world thanks to a collaboration with Transglobal

Fanfara Tirana is a musical ensemble named after the Albanian capital. In its early days, its members played alongside the "professors" of the army band and devoted weekends to weddings, ceremonies where music is almost more important than food.

The ensemble enjoys retouching classical pieces by Mozart and Bach, reinventing them according to the mood of the moment and with a passion for typical Balkan party music. But their daily bread are traditional folk songs of Albania, especially those from the southern regions.

We talk of Albanian blues to indicate a desire to express one's suffering with the aid of timeless music, in this case made superlative by the genius of the band, Hysni (Nico) Zela, voice of Fanfare Tirana. The reference is therefore to "Kaba" music, improvisations on clarinet or violin, the prerogative of the territories surrounding Tirana and some areas of Epirus. At first glance, there would seem to be some confusion – in fact, the fifteen current members of the group are very familiar with music, both classical and traditional from the regions that have always hosted them.

In 2002, an entrepreneurial entourage half-jokingly suggested to approach traditional songs with the power and the passion of the winds. As a result, the ensemble toured Europe for five years without ever having released an album. It was a winning anomaly, given that the tradition of Balkan brass bands had been dying out in Albania in recent decades, to make room for more transgressive trends like electronics, dub, techno, and tacky off-springs of the Bulgarian chalga.

"We have, in fact, brought to life what Albanian brass bands did in Shkoder, Elbasan, and Koriza", say on Blogfoolk the two cornerstones of the band, Fatbardh "Mr. White" Capi and Xhemal "Colonel James" Muraj. "We offer almost the same repertoire, but we are a bit more funky or jazzy in arrangements than our great-grandparents".

In 2007, Fanfare Tirana released their first album, Albanian Wedding, based on the numerous exhibitions held at wedding banquets over the years. The album is greeted with favour by critics and a large part of the public, less so by the authors, who believed it could have turned out better. The group shared the issues that arose during the mix and post-production, but in the end the feedback was more than rewarding.

The disc was included in the official WOMEX selection (World Music Expo, international exhibition of world music that takes place every year in a European country, after the first experience in Berlin in 1994). On November 1st, 2007, the album was included in the world's top ten list by the prestigious magazine Songlines and entered the top twenty of the World Music Charts Europe. Andrea Del Favero, artistic director of Folkest (International festival of world music), describes them as follows: "A group that could make even the dead dance, that can please both the old and the young". The proof is in their concerts, a succession of fast, feverish rhythms, absurd tempos (7/8 and 9/8) of pure Balkan origin, and more traditional ones in 2/4 from the area of Kosovo, linked with to European polkas.

The meeting with Transglobal

Next step – producing an easy listening album of Albanian ballads or continuing with the Balkan beat of entertainment? "In the end, we recorded 20 pieces", they explain. And here comes Olsi Sulejmani from Ballkan World Music Management , who promotes Fanfare Tirana in Europe.

The album met many favorable opinions, including by London-based Transglobal Underground, followed and admired for their catchy, cosmopolitan sound. "The music of Transglobal is, for all intents and purposes, a kaleidoscopic journey through rites of liberation, rhythmic secrets, joyful aesthetic, and sudden, imaginative scraps", says the Music Ballkan website. "All with one goal: exalting the deeper groove, finding the common thread that links different sensitivities, and connecting the multifaceted world sound".

"It was supposed to be a feat", explain the members of the Albanian band, "but the first tracks turned out so well that we just kept going". The seeming shyness and respect for the proverbial Transglobal turned into an incentive to give birth to a kind of "universal" album, full of sounds never heard before, which has been putting half-Europe on fire through 2013.

"Some experts have even talked of a new musical genre", say the leaders of Ballkan World Music Management. And not without reason. One can legitimately speak of an explosive mix of "Kabà" music from southern Albania and reggae, folk icon Hysni (Niko) Zela and the black voice of Tuup (an acronym for "The Unorthodox Unprecedented Preacher", whose real name is Duncan Godfrey), brass and electronics.

The title? The musicians started ironically calling it "yo-yo" album, for the constant commuting between Tirana and London of the various tracks. Then they chose Kabatronics, one of the songs included in the work, as the official title. Finally, it is worth mentioning the many collaborators who have contributed their talents to the success of Kabatronics, including Johnny Kalsi, founder of the British bands that have made the Indian beat their mission, Frank London, klezmer music genius, and Dr Das, bassist of the Asian Dub Foundation.