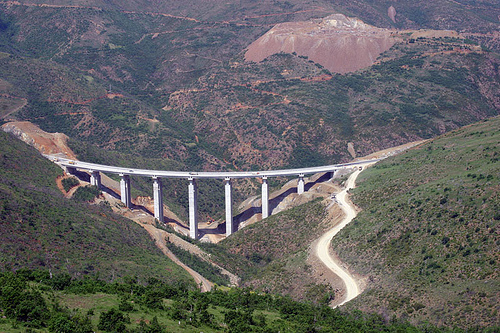 Recent statements by Sali Berisha on the strengthening cooperation between Albania and Kosovo have stirred a lively debate over the notion of "Greater Albania". Political considerations notwithstanding, relationships between the two states have been intensifying

Discussions on the 'Greater Albania' notion have been provoked by a statement in late August from the Albanian prime minister, Sali Berisha, who suggested increased cooperation between Albania and Kosovo. The Albanian prime minister said that "the idea of national unity is based on European ideals", meaning that much work needs to be done to achieve EU-like standards of cooperation. Serbia, as the strongest opponent of Kosovo's statehood, immediately expressed its opposition to the idea and warned officials in Tirana that regional cooperation is at risk when such ideas float in the air (despite Berisha's statement excluding discussions on sovereignty).

Statements from Albanian government officials supporting the union of Albania and Kosovo are not something new. In 2001, when the Albanian socialists held office, the justice minister, Arben Imami, stated that Albania and Kosovo should have a high priority of unifying their territories into a single state. Imami's statement attracted enormous media attention at that time and political concern because Kosovo had just come out of the war and was under strong international supervision, with independence nowhere in the sight. Serbia was struggling in an internal conflict with Albanians seeking more rights in the south of the country (Presevo valley), while Macedonia was close to a civil war between Macedonians and ethnic Albanians.

Over the past 20 years, unification ideas have not found wide-scale support in Kosovo. In 1998, the current Kosovar assembly speaker, Jakup Krasniqi, claimed that the Kosovo Liberation Army (KLA) would fight for unification of Albanian territories in the Balkans. However, after the war, the former KLA spokesperson Krasniqi aligned with other leaders in Pristina to make careful statements. Apparently, he knew that any reference to unification with Albania would hinder the process of determining Kosovo's status and establishing the new state.

Not by chance, the new Kosovar constitution states that "Republic of Kosovo shall have no territorial claims against, and shall seek no union with, any state or part of any state". Furthermore, Kosovo's general attitude on the issue may be reflected by pro-union political parties inability to win more than a couple percent of the electorate.

Opponents to Berisha's statements have suggested that "pan-nationalist projects are harmful and don't enjoy support from the international community". However, others see the statement as urging the two states to unify through a EU model. Intensified communication after the war in Kosovo has changed the situation on the ground and has brought Kosovo and Albania closer than ever to each other.

Tourism figures show that, in the 2009 season, about 70 % of all tourists visiting the Albanian coast came from Kosovo. According to the latest data provided by the Kosovo police, during July and August 2009 as many as 528,000 Kosovar tourists entered Albania.

At the heavily trafficked Vermice/Morine border-crossing, both Kosovar and Albanian police officers simply waved on all vehicles with Kosovar car plates. Drivers did not need to show personal or car documents or even stop with the customs officers for a routine, "Nothing to declare, neighbour." When entering Albania or returning to Kosovo, a police officer's simple gesture was the only sign of a border, while another police officer counted the number of vehicles for tourism records.

Privileges for Kosovar drivers do not end there. Kosovar drivers apparently enjoy general immunity from routine traffic checks by the Albanian police; even when a violation is at stake. This may be because, since 2000, Kosovars make up a large part of all tourists visiting the Albanian Riviera.
Unsurprisingly, tourists visiting the Albanian coasts end up in apartments owned by Kosovars, whether it is in Durres, Vlora or Saranda. Albania's property boom in the last 15 years has inspired Kosovar Albanians to invest in property and secure themselves a spot by the sea. As far as Saranda in southern Albania, tourists stopping for a cool beer to defy the Mediterranean summer temperatures might pick up a "Peja" beer, produced in the namesake city in northwest Kosovo and with a price similar to any bar in Kosovo.

In culture, Tirana and Pristina hold very few events independent of each other. The two capitals smoothly synchronise film festivals, song festivals, beauty pageant contests, Big Brother reality shows, and, of course, language seminars . For example, this year, an Albanian artist won the most important video event in Pristina (Video Fest), while a Kosovar singer won the most important competition for Albanian modern music in Tirana (Top Fest). A lack of quality TV broadcasters in Kosovo has benefited Tirana-based media firms that have 'conquered' Kosovar houses through cable TV programming that ranges from children shows to political and lifestyle debates.

In sports, seven Kosovar athletes play regularly for Albania's national football team. A frequent captain for Albania's national team is Kosovo-born Lorik Cana, a former player for Marseille and current captain of the Sunderland team in the English Premier league, . The 26-year-old is following the success of another Kosovo-born player who has retired from the international level, Besnik Hasi. As an experienced player in the Belgian football league and at the level of the Champions League, Hasi has frequently led the Albanian national team. Furthermore, a few players in almost every sport compete for national teams of Albania because of the lack of international recognition of Kosovo.

Since the war ended in 1999, the private sector has explored market possibilities on both sides of the border. Albanian-based companies play a crucial role in the rapid development of the construction sector in Kosovo. Meanwhile, the government in Tirana has regularly sent experts to assist the new Kosovar institutions in creating laws compatible with the EU standards.

Lately, Konfindustria Shqiptare, an Albanian organisation promoting domestic industrial production, has suggested targeting economic policies towards a market of about six million consumers predominately governed by ethnic Albanians. The organisation claims that this is the way to establish good products and prepare for a greater market such as CEFTA (Central European Free Trade Agreement), an association including both Albania and Kosovo and representing a market of more than 20 million consumers.

However, the most important element bringing closer the two capitals is construction of a new highway that makes Kosovo's border only a two-hour drive from the Adriatic Sea. As a result, without the obstacle of a minimum of six-hours travel on rough mountain roads, Albanians have visited Kosovo in large numbers.

Berisha's statement that Tirana and Pristina should not look at each other as foreign countries apparently has been endorsed by the actions of citizens. In early September, the new Albanian government has made Kosovo its main foreign-policy priority and has pledged to support Kosovo's efforts to add to the current 62 international recognitions of its independence.

In the region, Croatia has had a long-standing policy of granting passports to Croatians in Bosnia-Herzegovina and other countries in the region. Serbia has started to extend its welcome to the Serbians in Bosnia & Herzegovina, and has issued Serbian passports with which they would, most probably, travel without visas in EU countries beginning next year. The Albanians in the Balkans have not had a similar cooperation. Neither the Kosovar Albanians nor other ethnic Albanians living outside the Albanian state have been granted a passport by authorities in Tirana; except, of course, football captain Cana and friends.