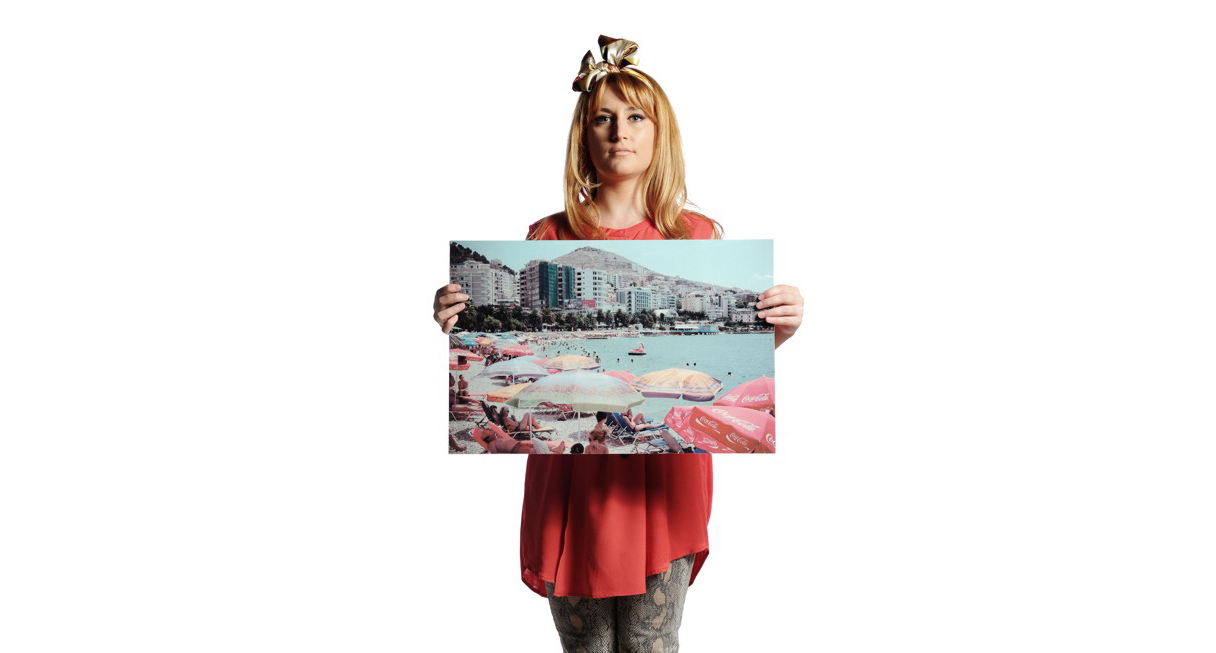 Saranda, a picture from Alban Muja's exhibition "My name, their city"

For ten years Alban Muja of Kosovo has been doing research into the names of towns, places and people; at the moment he has an exhibition in the centre of Tirana in a small gallery called “the fly”

Alban Muja is a young Kosovan artist, one of the more active on the alternative scene in Pristina. Mixing various techniques, including video, photography and texts, the artist shows some of the curious and unexpected phenomena of Kosovo today.

For about 10 years his artistic studies have been focused on understanding the concept of ascribing names to people and places, and their meaning in time and space, which go back to unresolved political questions, identities and frustrations, illustrating the life led by people in a particular period.

My name, their city

Recently, Alban Muja brought one of his current projects to Tirana. Hosting it is a minute gallery, Miza (the fly) newly inaugurated in the capital's centre and which looks like becoming a focus for alternative, young people's art in the Albanian capital. A small space, but sufficient for hanging 7 photographs of 7 young Kosovans portrayed by Alban Muja, each holding a panoramic photo of a town in Albania. Hence the project's name – My name, their city.

What do those youths have in common with those towns? They have the same name. In fact young Kosovans often have names of Albanian towns, mostly based on tourism and with a musical sound, like Elbasan, Vlora, Saranda or Shkodran. “Kosovan parents used to give their children the names of Albanian cities towards the end of the 70s and the beginning of the 80s” explains the artist. “These were the years when there was no contact between Kosovo and Albania and the Kosovans had idealized Albania and these cities immensely, though having no information about them.”

A generation of Saranda, Vlora, Berat and Elbasan to claim an Albanian identity at the time when Yugoslavia was beginning to plunge into a political crisis. “Some of these youths had no idea what their name represented in Albania. A boy called Milot thought his was the name of a plain, then, after the Kosovan conflict in 1999, he discovered he had the name of a small town north of Tirana, with no tourism connections.”

But the name of the project also alludes to other aspects of this history, the contrast between the Albanians of Albania and those of Kosovo: the former amused to find people named after Albanian cities, the latter disappointed on discovering the real Albania, far from the idealised image they had of it.

Even so, the melodiousness of the names in the Albanian language and the Albanianness which after all characterizes them, mean that young Kosovans are happy to be called like the toponymy of Albania. “I didn't want to criticize this phenomenon, just describe it,” Alban Muja clarifies. Rather than making an issue of it, therefore, offering, in Tirana, an occasion for Kosovan and Albanians to meet.

This phenomenon of curious names with a historical or political content is not confined to Kosovo and its history. One need only think of those called Italia and Benito during the Italian fascist period, those called Slobodan and Yugoslav after WWII in Yugoslavia, or Perparim (Progress) and Revolucionar (Revolutionary) in communist Albania. “This is a typical phenomenon of societies in transition with numerous political problems, as was the case in Kosovo”, Muja continues. “Names carry the history and slogans of the moment when the people were born. The subjects dearest to their parents.” 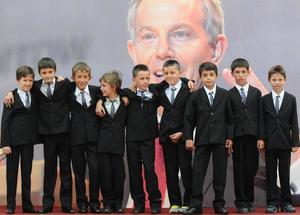 Another video-project of Alban Muja's had as protagonists two young people born in the 80s: Tibet and Palestine. “I presume it was a form of solidarity their parents were expressing towards Palestine and Tibet in those years. They probably associated the situation in Kosovo with the political events in those two countries.”

Names can also express feelings, gratitude. Like the Tonibler generation: the boys born in 1999 who bear both the name and surname of the then British Prime Minister, Tony Blair. “Blair is seen as a hero in Kosovo, among those prominent statesmen who contributed most to the liberation of Kosovo. Those boys were born in that moment of history”, the artist recounts. Muja has photographed 9 Tonibler, dressed up for the occasion, posing for a group or team photo, with a gigantic poster of Tony Blair behind them.

His interest in names has taken Alban Muja outside Kosovo with projects like “Tourist city” set in Novi Sad in Serbia, where the artist has placed the transcriptions of the names of the main streets of the town in Latin script alongside those written exclusively in Cyrillic, following a decision of a political-identity nature by local politicians.

The fly and the motorway

Alban Muja is one of the first young Kosovan artists to exhibit in Albania. The exhibition was made possible by “Kosovo 2.0” which fitted out the new “Miza” gallery, recently founded by three young Albanian artists. This exhibition is only one of the activities in a wider project known as “Autobahn”, a linguistic loan from German to Kosovan-Albanian which means motorway, and clearly refers to the “Patriotic Highway”, the new motorway which has facilitated movement between Pristina and Tirana.

“The project aims to present the culture and art of Kosovo in Albania”, explains Muja. “Up till now, cultural communication between Tirana and Pristina has been very fragmentary. The commercial sector is different, but remains confined to profit motives.”

The “Autobahn” project coincides with a period of more qualitative and less stereotyped relations between Pristina and Tirana, but also takes place within a new, more open phase, recently felt in the Albanian capital with the establishment of an alternative scene which seems to want to free itself of the restrictions of the cultural institutions. “It's a reciprocal exchange”, Muja comments. “But I think Tirana will get more out of it, because the artistic scene in Tirana is much less lively than in Pristina.”