Albania: the day after the protest of the opposition 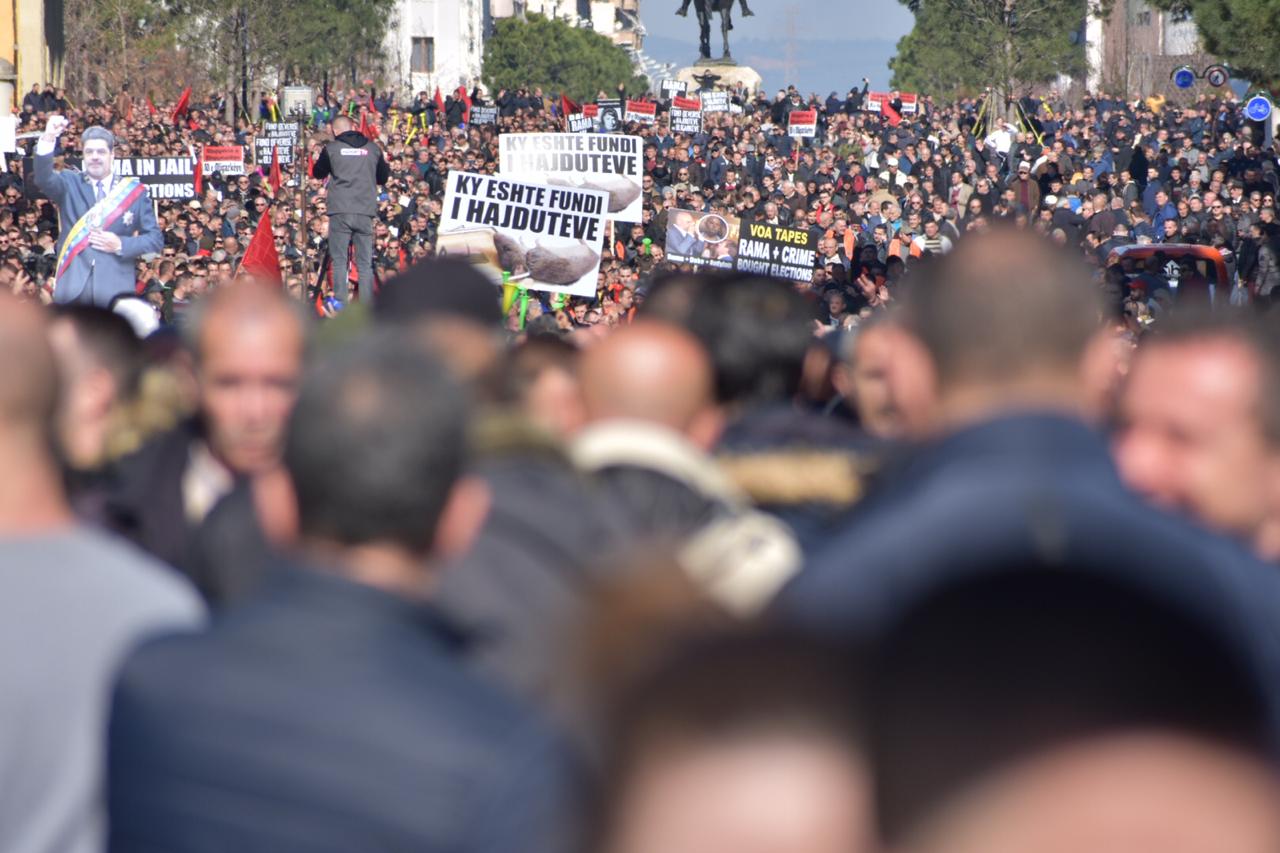 The rally of the opposition in Tirana (Source: Democratic Party of Albania)

In Albania last Saturday a rally organised by opposition coalition degenerated in violent actions. A group of protesters instigated a confrontation with the police cordon around the government building

Last Saturday, Tirana witnessed the beginning of the new wave of protests organised by the opposition coalition, with the aim to overthrow the ‘narco-traffic’ government led by Socialist Party leader Edi Rama.

In the past weeks, Democratic Party leader Lulzim Basha criss-crossed the country with the aim to personally meet and collect the citizens’ dissatisfaction against the government, following allegations on corruption scandals linked to road construction, vote-buying in the 2017 elections, and collusion of politics with crime as well as high unemployment and youth migration.

Together with the leader of the Socialist Movement for Integration Monika Kryemadhi, Basha repeatedly emphasised that the protest of February 16th was going to be Albania's most massive demonstration of the past 30 years.

Although it was initially announced as a peaceful demonstration, accompanied by the distribution of flowers by a group of protesters, the rally degenerated in violent actions after just 30 minutes from its beginning. A group of protesters instigated a confrontation with the police cordon around the government building by throwing molotov bombs and hard materials. The aim was to enter and symbolically occupy the Prime Minister’s Office.

In response, the police propelled tear gas and water against protesters in order to restore order. Pre-registered voice messages were aired by megaphones placed along the boulevard, inviting protesters to keep calm and avoid the destruction of public property, which is a breach of the law.

The 4-hour protest ended in the partial destruction of the front-side of the government building and two art installations, along with burning of decorative trees. Nineteen citizens were hospitalised, including policemen, journalists, and protesters. 16 protesters were arrested. The leaders of the opposition parties have not taken any stance on the use of violence. Instead, they repeatedly accused the state police for inciting citizens to violence and declared their intention to protest again next Thursday, February 21st.

Immediate reaction from the diplomatic corps

All the foreign missions in Tirana issued immediate press releases condemning the violence. Recognising the citizens’ right to peacefully assemble and protest for better life conditions and a fully-fledged democratic society, they called for mature and constructive behaviour from all sides.

The EU Delegation and member states urged all sides to show immediate restraint, while the US Embassy “called upon all involved in Saturday’s protest, and all of Albania’s political leaders, to reject violence and ensure the demonstrations are conducted peacefully and constructively”.

“The escalation of street violence represent[ed] a breach of peaceful democratic protest principles. The instigators and the perpetrators bear the responsibility for [the] incidents”, stated the press release by the OSCE Presence to Albania. Two days earlier, OSCE had already issued a statement expressing its expectations for a peaceful rally which would not degenerate into violence.

Tirana woke up on Sunday in silence, between the citizens’ disappointment and long-lasting fatigue on the ‘traditional’ degeneration of the protests in violence, flames, and heated political debates.

The general dissatisfaction against the poor living conditions, corruption, and organised crime, accompanied by the lack of hope, still keeps citizens hostage to an uncertain future. Definitely, not all the protesters in Tirana's main boulevard approved this old-style protests and the exploitation of their daily misery for purposes of getting power. From the interviews collected by the media outlets on the day of the protest, a considerable number of protesters expressed their dissatisfaction against the arrogance of the government and did not necessarily see themselves as represented by the opposition leaders.

Unfortunately, at the moment, there are no suitable alternatives available to address the widespread distrust against the current political parties and respective leaders. In turn, the electoral system in force makes it hardly possible for new parties to enter the Parliament. Due to a cross-party consensus at the national level, party leaders hold all the power to designate electoral lists, thus restraining citizens' choices during the elections. There is no real check of the candidates designated to seat in the national parliament for four years with the aim to represent citizens’ interests. This gap between the electorate and elected MPs contributes directly to limited accountability and representability, which ends up in a strong government with limited supervision from the parliament.