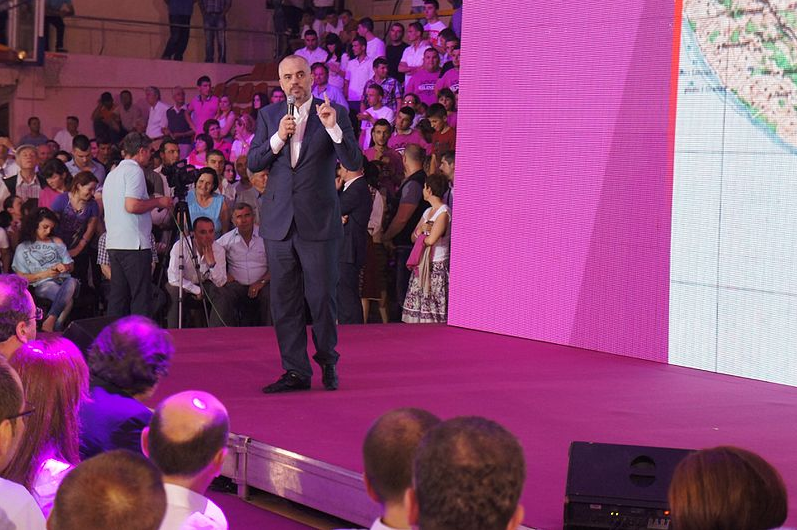 The Rama 2 era started with the Socialist Assembly of August 27th, that illustrated the priorities of the upcoming term – albeit without an internal debate or a concrete government programme. Rama promised a smaller team and a slimmer administration: 11 ministries instead of 16 and 2 state secretaries instead of 3. Veteran Gramoz Ruçi was appointed president of Parliament and Taulant Balla has become the leader of the parliamentary group, while Senida Mesi, municipal councillor in Scutari since 2013, is the surprise new vice prime minister of Albania.

However, the government sticks with the old reliables: Arben Ahmetaj, confirmed as minister of Financial Affairs, adds the Economy and Labour ministries to his rich portfolio; as minister of Foreign Affairs, Ditmir Bushati will also coordinate the European Union integration process; Damian Gjiknuri will manage energy resources as well as infrastructures; and Lindita Nikolla will be in charge of education, sports, and youth.

There are 2 state secretaries without portfolio: Sonila Qato for business relations and former prime minister Pandeli Majko for relations with the diaspora – among the few survivors of the almost forgotten era of Fatos Nano. Although without portfolio, Majko returns to the government to deal with Albanians abroad, where Rama is believed to be even stronger – if possible – than on domestic soil. And considering that in 2017 there were nearly 3.5 million registered voters and that the Albanian population does not reach 2.9 million resident citizens (data of January 1017), the post ballot repeatedly promised by the Albanian left could weigh as much as the resident vote.

Two long-time untouchables were left empty-handed: former Interior minister Saimir Tahiri and Healthcare minister Ilir Beqaj, who paid the price for the rampant cannabis production in the country and too many concessions to the private sector respectively.

The announcement of the new government team has not failed to stir controversy for the choice of figures of litte political experience – sometimes only known for previous collaborations with Rama – or dubious past. In primis, the new Parliament Speaker Gramoz Ruçi was among the local leaders of the Albanian Labour Party during the regime; in 1991, in the delicate period of transition to "democracy", he was appointed Interior minister – at that time, also head of the secret police. Fatmir Xhafaj, on the other hand, had already been object of controversy for starting his career as a prosecutor and judge during Enver Hoxha's regime.

The 50-50 gender composition of the new government was met with enthusiasm. The new entries are indeed mainly women, largely to replace the 5 unconfirmed female ministers. However, arithmetic representation is not matched by a balance in power. None of the seven female ministers has any real weight in the party or the Albanian political scene; none of the women promoted over the years by Edi Rama has ever had. Also in this government, women are used for effect, as with the fairy tale of the municipal councillor turned vice prime minister. A fairer division of power, 100% male prerogative in Albania, is again postponed to a next term.

On the other hand, thanks to the 30% gender quota established by the Electoral Code, although sometimes ignored or circumvented by parties, for the first time 39 women will be sitting in Parliament – almost 28%, with a significant increase over the 17.8% of 2013.

Last July, the Democratic Party held its primary elections with the usual disregard for any democracy and regularity concerns, confirming pluri-defeated Lulzim Basha as leader of the party. Running against colleague Eduard Selami, Basha won over 91% of preferences, seemingly untarnished by the recent electoral fiasco and the allegations of vote rigging and "farce primaries" by opponents in the party. Returning to Parliament after 6 years of leading his parliamentary group, with his opponents outside the Parliament and former prime minister Sali Berisha more and more an outsider, Basha now has all the chances to start doing opposition, if he wants the democratic constituency to forget both the suicidal pre-election agreement with Edi Rama and the worst electoral fiasco of the party's history.

Basha will reunite in the ranks of the opposition with the Socialist Movement for Integration, also undergoing reorganisation now that President of the Republic Ilir Meta has delivered leadership in the hands of his wife Monika Kryemadhi. Out of the government after 8 years, the party now faces the difficult task of containing, as far as possible, the predictable physiological decline in consensus and members.

Although the two parties may join in the opposition to the purple parliamentary majority, the apparent reciprocal mistrust suggests that the ties between politics and business – those extra-parliamentary collaborations still ongoing despite the breakup with the Socialist Party – may have the best on political alliances and coalitions, weakening the effectiveness of the opposition action of the Socialist Movement for Integration.

One man at the helm

For those who followed the June election campaign, Rama's "pact" with voters this time was clear. By suddenly erasing four years of government, positioning himself almost as an opposer, Rama asked for the mandate to govern without interference by the allies, in order to freely carry out reforms. With the majority granted by Albanian voters, it was clear that the government, like the electoral lists, would be made in the image of its undisputed leader.

In fact, democratic Albania has never had such a monolithic, one-man-show government. With no more inconvenient allies or internal opposition, Rama is, if anything, left with no excuses. After almost 20 years of politics, always on the front line, and after the last overwhelming victory, fatigue – or, worse, boredom – may not spare even the artist prime minister. The nervousness shown in the last public appearances may already be a first sign of the side effects of a power that crushes even those who carry it.

Whether this will be the swan song of the Rama era or a further step towards more seasons of one-man leadership, it is still difficult to predict. What is certain is that, from now on, political merits, demerits, and responsibilities will all be borne by the prime minister alone. For better or for worse, this is the real novelty of Rama 2.