Albania: the civic duty of protecting the National Theatre 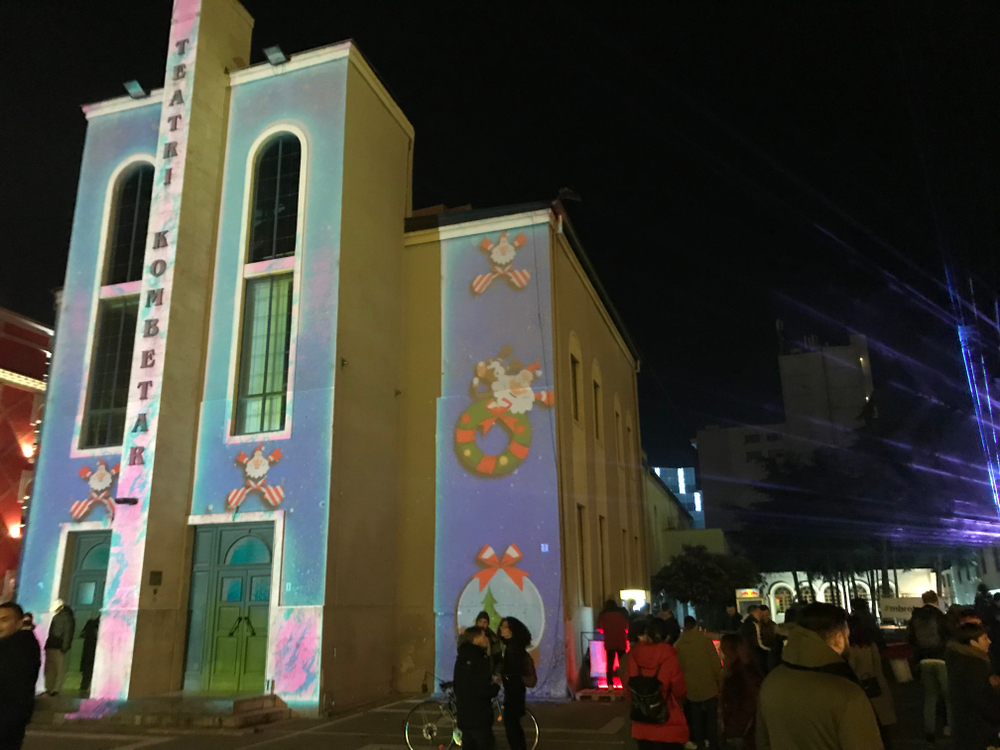 The 20-month long protests against the demolition of the National Theatre reflect not only the need to protect the country's common historical and cultural heritage, but also citizens’ demands for further democratisation of Albania

The occupation of the National Theatre started last July 24th, following the attempt by the state police to take control of the historical building in the centre of Tirana. Since then, artists, architects, activists, and ordinary citizens have done shifts 24/7 to protect the public good from private interests. This long-lasting, peaceful protest is not the only civic initiative currently running in the country, as there is widespread discontent over the general domestic situation.

The story of the Theatre’s demolition started in 2018, when it became public that the government was about to approve a special law opening up to private-public partnership and allowing a construction company to build a shopping mall and several towers in that area. The initial attempts to put pressure on the government to step back had little success. Earlier this year, the European Commission was asked to assess the extent to which the Special Law on the National Theatre was violating the obligations arising from the Stabilisation and Association Agreement in the field of competition law, considering that this was essentially a construction project assigned without a tender. However, the Commission’s official response was rather ambiguous and only led the government to make some cosmetic changes to the law. In a recent communication with a web portal (Exit.al), the Commission stated that releasing its internal report on this issue might cause a diplomatic incident, leaving the matter to the domestic judiciary.

In fact, due to the ongoing judicial reform, the Constitutional Court is still paralysed and there are no internal mechanisms to address the problem, thereby keeping hostage the National Theatre’s destiny and raising perplexities among activists on the government's next moves. Alliance Activist Lindita Komani declared that “the theatre’s issue is a matter of alienating public property without the citizens’ expression of will”. “This is not about artists as the government tries to argue. It’s about all citizens”, she added.

The polarised political situation has not helped find a compromise. The protests have been used by both sides of the political spectrum for their own political calculations and gains, with different manipulation attempts in order to divert attention and split public opinion on the Theatre’s destiny.

Theatre as a social venue

The occupation has created a new civic space for citizens, turning the theatre into a social venue run by the Alliance, where people can meet and discuss issues of public interest, like the current state of democracy, European integration, reform progress, and so on. These afternoon meetings have served to shake society’s general apathy, express citizens’ frustration with the political establishment, and question the current domestic shape of democracy.

"All citizens interested in this issue - not only from the art community – have found in the National Theatre’s protests a lot more than protest itself, because this is a protest for democracy in Albania”, explained Komani.

Denouncing Albania's shrinking media freedom, Alliance activists have pointed out that the Theatre developments have been almost ignored by the domestic media, as “to a certain extent media is captured by the state”. An anonymous activist stated that journalists support the Theatre issue on a personal level, but are not allowed to cover it. Internationally, the protests have been covered by prestigious media outlets and supported by personalities like Austrian Nobelist Elfriede Jelinek or Italian actor Michele Placido.

Since July 27th, there has also been a "Festival for the Protection of Theatre", which brings to Tirana artists from the region and the EU to perform on stage and/or showcase their art. On average 2-3 art events per week, accessible to all, have further enriched the city's cultural life.

In the aftermath of the earthquake of November 26th, the Theatre venue turned into a place of solidarity and collection of food and clothing. Via its social media, the Alliance provided immediate relief to the families affected by the earthquake and coordinated support channels, gathering those willing to volunteer.

Over the last two years, the activists of the Alliance have advocated at different levels in order to protect this representative historical building. For example, they applied to include the National Theatre in the list of the 7 most endangered European heritage sites for 2020 – a programme run by Europa Nostra (a Europe-wide heritage organisation) and supported by the European Union.

On the basis of its historical and cultural value and the imminent threat of demolition, the Albanian National Theatre was shortlisted to become part of this programme and the final results will come out by March 2020.