Albania: the end of a theatre

Albania: the civic duty of protecting the National Theatre 18/12/2019 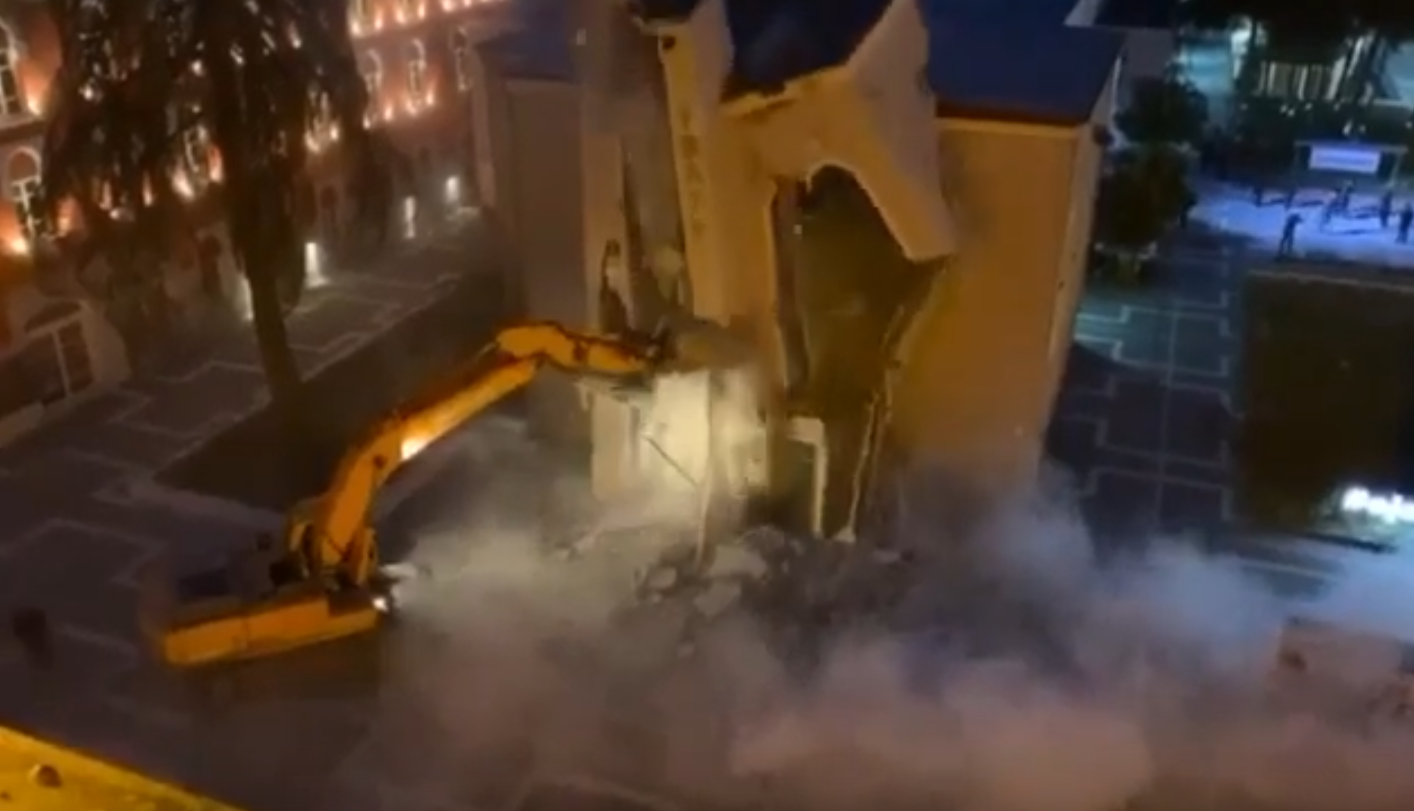 In the middle of the COVID-19 pandemic, under fierce lockdown measures, Albania’s socialist government performed the last act of the power play on the demolition of the National Theatre. At the expense of democracy

It was 4.35am of Sunday morning (17 May) when an activist of the Alliance for the protection of the National Theatre sent me a message: “Police everywhere… please let people know”. I would never have imagined to read, few hours later, that bulldozers had demolished the iconic façade of the theatre, and the show was still going on. The Experimental Theatre, despite being recently renovated by the municipality, was sacrificed too.

Hundreds of armed policemen surrounded the venue - under 24/7 sit-in of activists and artists since last 24 July - and dragged them out of the building to make way for bulldozers. Local media (Exit.al) reported that during the unlawful intervention mobile signal was suspended, to make it impossible for activists to call for support.

The intervention tried to take advantage of the pandemic measures to discourage protesters’ gathering. Despite the movement ban, once the news became of public dominion, hundreds of citizens reached the city centre to protest against the illegitimate demolition of the historical building, a cancellation of cultural heritage as well as erosion of rule of law. Physical confrontations took place between protesters and state police. The protesters reported that police forces removed their ID badges to avoid identification. 37 protesters, including a journalist, were accompanied at local police stations.

On Thursday evening (14 May), the Tirana City Council adopted the decision to demolish the National Theatre. The meeting was held in a covert, fast-track procedure, with members asked to e-mail their vote on the draft-decision to demolish the theatre, which was included in the meeting agenda earlier that day. The irregularity was denounced publicly by Fabian Topollaj - the only member of the City Council representing the opposition out of 61.

According to the Council’s decision, the technical assessment of the Construction Institute (dating 13 May) demonstrated that the theatre building is in difficult technical conditions and maintenance would cost more than reconstructing. The repairing interventions would never bring the building in optimal conditions, therefore demolition is advised. As per legal procedures, the Council’s decision enters into force 10 days after publication (25 May) and 24 hours before the demolition must be notified to the State Police.

Ervin Goci, an activist of the Alliance, argued that the technical assessment was manufactured and its content was similar to that commissioned by the government in 2018. The Alliance sued three experts that authored the technical expertise on theatre’s demolition. President Ilir Meta deposited a second formal request to the Constitutional Court for judicial review of the municipality’s competence over the national theatre. Earlier this month, the Alliance raised charges also against Tirana Mayor Erion Veliaj and his deputy Arbjan Mazniku for abuse of office. The Special Prosecution Against Corruption and Organised Crime confirmed that an investigation had already started against unknown persons.

In early May, as per the government’s decision, the Municipality of Tirana received in property from the Ministry of Culture the cadastral area where the theatre is located. Published on the same day on the Official Gazette, this decision specified that the municipality cannot modify the destination of the property or transfer it to third parties. This move was already expected in February, when Mayor Veliaj declared that the municipality had agreed to build a new theatre by itself, as artists’ requests went beyond the initial cost foreseen in the business plan of the local construction company. He declared that Tirana's Municipality has the capacity to build the theatre which, according to Bjarke Ingels’ project, costs about 30 million Euros. A sovereign guarantee would be issued by the government in favour of the municipality so as to receive a loan from a foreign institution.

On 24 March, Europa Nostra (a Europe-wide heritage organisation) confirmed the inclusion of the National Theatre in the 7 Most Endangered Cultural Sites in Europe, along with its intention to gather funds for the restauration and conservation of the historical building. On the same day, the Albanian government declared the state of emergency due to coronavirus, restricting fundamental rights like freedom of movement and assembly. Despite the restrictions, the activists of the Alliance continued to occupy the venue, in compliance with the imposed social distancing measures.

An immediate reaction came from Europa Nostra and the European Commission after the City Council’s decision. Europa Nostra tweeted: “We are for Europe’s cultural heritage. This is why we oppose the proposed illegal demolition of the National Theatre [...] The theatre is protected by national law and is strongly defended by civil society and experts”. Mariya Gabriel, European Commissioner for Innovation, Research, Culture, Education and Youth, wrote: “Dialogue with civil society and experts of cultural heritage is necessary before taking an irreversible decision on the National Theater. We strongly encourage all relevant national institutions to engage now in a constructive dialogue with heritage stakeholders”.

On Sunday morning, Europa Nostra wrote again: “Sad day for Cultural Heritage [...] Sad day for democracy and rule of law in Albania and Europe. Early this morning, Albanian authorities arrested civil society activists and started demolition of protected National Theater in Tirana”. Meanwhile, the EU Delegation in Tirana issued a diplomatic statement, expressing their regret that their call for dialogue between the authorities and civil society was not followed up on by the relevant state institutions.

Amidst anger and disappointment

Was it really an urgent necessity to demolish the theatre in the middle of the pandemic, knowing that it would stir citizens’ anger? What is the most harmful illness today in Albania, COVID-19 or erosion of country’s fragile rule of law and democratic foundations?

Certainly, the National Theatre was the symbol of civic resistance in Albania over the last three decades. As never before, its destiny was kept hostage of an ongoing justice reform, which has not managed to unleash its potential. Both requests for judicial review to the (currently paralysed) Constitutional Court remained in vain.

The demolition is a visible symptom of general rule of law decline and concentration of power. With a non-representative parliament, a fragmented opposition, and lack of a checks and balances system, the government has been free to act. Private interests prevailed over public ones in this case, also highlighting pervasive arbitrariness. No less responsible is also the international community, which implicitly has preferred stability over contrasting state capture in Albania.

The Alliance declared that the demolition of the theatre is an institutional crime, based on unconstitutional acts and strong business interests. President Meta called it a ‘moral crime’. The opposition announced massive protests. In turn, the Prime Minister responded with the publication of a video trying to discredit the protesters by stating that they ‘don’t want development”.