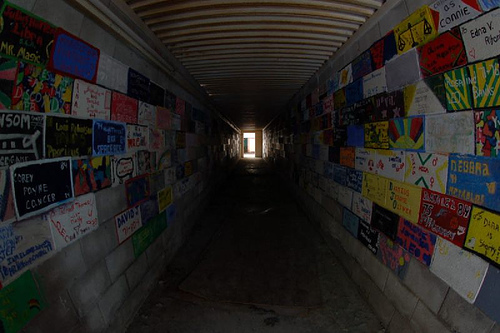 There are thousands of orphans in Albania. At the age of 14 they are expelled from orphanages by law, and often have no alternative to crowded dorms where, in poverty and without prospects, they remain for most of their life. A report

About 31,000 orphans, aged between 0 and 14, are housed in Albanian orphanages. In about the 80% of cases, they were abandoned by their parents – a growing phenomenon that reflects a dark side of the long Albanian transition, made of economic insecurity and of sexual revolution still not metabolized by the social and economic system. Orphans grow up unseen, and so remain for almost all their life.

No one speaks about them, except during the festive season or the institutional Children's day – June 1st, when politicians or celebrities take the time to visit orphanages and give gifts, escorted by cameramen and reporters. The children's innocent eyes and tentative words in front of the microphones have become a ritual spectacle for Albanians in these occurrences, but do not contribute much to improve the orphans' situation, which gets even more serious when they grow up and out of the protection of the institutions.

Neither children nor adults

The drama that marks the orphans for life begins at age 14. At the beginning of adolescence, an age still carefree for most, they are practically left on the street, since by law the institutions look after orphans only up to this age and then leave them to their own devices, despite their still being minors. Orphans struggle to survive on their own, since the legal vacuum results in a severe lack of social policies in their support.

"Most of them are sent in miserable conditions to attend vocational schools and housed in overcrowded dormitories, where they remain pretty much for life", says Ilir Cumani, director of the National Institute for Orphans. Of course, the kids' inclinations and talents are secondary – very few escape the fate of vocational school and the dormitory.

This is a relatively recent phenomenon. In the past, orphanages have given the country illustrious names in the arts, culture and the professions, which shows that there used to be much more attention for the intellectual development and social inclusion of this disadvantaged group.

"There is no way someone goes to college. The dormitories of vocational schools host orphans aged between 14 and 50 – marginalised people who live in extreme poverty, sometimes even with their partners or children. Just take a look at the dormitory of the Harry Fulz school in Tirana. In the hospitality management school and a couple of other buildings there are 104 orphans, aged from 14 to 54 years. They're pretty much ageing in those dorms", says Cumani.

Some of the interventions under SeeNet II – decentralised cooperation programme – target minors in situation of parental abandonment. As regards the area of Shkodra (northern Albania), Endri Xhaferaj, representative of the municipality of Forlì (in Region Emilia Romagna, technical partner of the programme), explains the double value of the projects: "We support the regional vocational training centre in Shkodër in order to establish a system of management, planning, and evaluation of training according to the dynamics of the local labour market, taking into account the enhancement of the decentralisation process for vocational training according to the EU integration process. In addition, our activities aim at shaping innovative training courses by testing the intersection of work supply and demand and calibrating the effectiveness of training".

The Region Marche (SeeNet II partner within the Action for planning and social planning, together with Tuscany), is active in the municipality of Vlore (southern Albania) with the goal of supporting the transfer of administrative responsibilities and the adequate activation of multilevel governance processes. In this area, SeeNet II pilot initiatives address children in situations of parental abandonment.

Public vocational schools are not in tune with the needs of the Albanian market and are the place where students rejected by more prestigious schools end up. Poverty and neglect make orphans a group at high risk of crime and exploitation. "Many just disappear. Boys often end up prey to trafficking, drug dealing, theft, and the like. And girls are exposed to sexual exploitation, prostitution”, says Cumani.

No country for orphans

As always, the origin of the problem lies in the combination of State failure, hasty reforms, conflict between local and central governance, and an inefficient, corrupt civil society. To complicate matters, according to experts, a decision of the Council of Ministers of 2006 decentralised competencies for the management of the 26 Albanian orphanages to local authorities, municipalities, and provinces – a process that passes through patterns of bureaucracy and power that are even more complex and unstable than in the central government. The reform is seldom supported by adequate funding and, if local authorities are not politically in line with the central government, access to State funding becomes even smaller. Consequently, orphans are far from a priority for local authorities. On the other hand, in all cities where there are orphanages, dormitories occupied by orphaned adults are part of the urban landscape, tacitly tolerated and ignored.

On this subject, Albania has received several unflattering memoranda by Amnesty International, with harsh words and proposals for measures to improve the situation. "We emphasized the need to act for the social inclusion of orphans from the age of 14, but Albania has never taken this issue seriously", says Mirela Shira, South-Eastern Europe manager at Amnesty International.

Yet, despite the lack of will shown so far, this is an issue that the Albanian state will have to face sooner or later, also because this is one of the conditions to be fulfilled in order to comply with Brussels' human rights standards. The situation is further complicated by the mismanagement of the little resources available. Ilir Cumani says that the EU provided financial support for as much as 26 million Euros, to ensure minimum housing conditions for orphans currently placed in dormitories, but the funds are lost in the maze of bureaucracy and civil society.

In place of a solution

Making contact with inhabitants of the dormitories proved to be impossible. Neither I nor my friends were able to identify someone in our circles of friendships and acquaintances who had been in an orphanage, let alone someone who still resides in the dormitories. The only other option was to encounter the justified distrust of their inhabitants – the marginalized and discouraged will naturally close their door on you.

Without being able to make contact with anyone, I walk away from a dorm crowded at the limits of dignity and see a well-known block of newly constructed buildings. They are mostly uninhabited, like most new buildings, because of the economic crisis that hit the pride of capitalist Albania. There is also a paradox here: on the one hand the plight of orphans, on the other the greed of the tycoons, who would rather leave buildings unsold than lower the prices. And no social housing policy to improve the situation, at least a little.