"Addressing the challenges posed by disinformation in the Western Balkans“. Day 1 14/12/2020

"Addressing the challenges posed by disinformation in the Western Balkans“. Day 2 14/12/2020 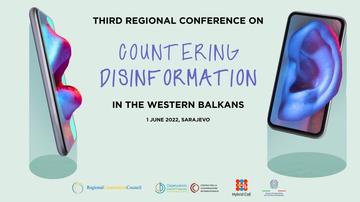 The third regional conference devoted to countering disinformation in the Western Balkans, organized in Sarajevo by the RCC - Regional Cooperation Council in cooperation with the OBC Transeuropa and the EU Centre of Excellence (CoE), built on the previous ones. The conclusions of the conference

The third regional conference devoted to countering disinformation in the Western Balkans, organized in Sarajevo by the RCC - Regional Cooperation Council in cooperation with the OBC Transeuropa and the EU Centre of Excellence (CoE), built on the previous ones bridging different narratives and perspectives around the nature and features of disinformation as a global phenomenon and its contextualisation in the region of the Western Balkans. Furthermore, it offered media literacy training for the Balkan youth delegation that convened for the event.

The nature of the threat

Disinformation is an information disorder that results in societal disorder. It poses a security threat to the democratic environment by promoting polarisation of political dialogue and debate, the creation of impermeable information bubbles, the radicalisation of information content, and increased vulnerability to asymmetric info-warfare attacks.

Several panellists pointed out government institutions, government-linked media, government-linked actors such as organised troll groups, profit-driven platforms, and conspiratorial communities as the primary agents involved in creating and spreading disinformation. Regarding conspiratorial communities, it is considered no coincidence that the same or overlapping communities often spread disinformation on apparently unrelated topics, such as Covid-19 and war in Ukraine or conflict-related issues. This highlights a wider interlinked and polluted info-sphere in which disinformation thrives, and the ability of the same networks to mobilise independently from specific topics and to be manipulated and/or directed by external forces.

Political aims and economic gains were indicated as the main reasons behind the spread of disinformation, therefore potential areas of intervention for fighting the issue were pointed out. For instance, regulations in the digital market space were suggested as a tool for countering the click-bait tendencies nested in the architecture of the digital platforms and the advertising market and thus reducing the financial incentive to disinformation.

Mainstream media are seen to be failing in adapting to the expanding digital domain and we witness a growing gap between them and the younger generations, which are avoiding TV in favour of digital platforms for news consumption.

Lack of professionalism in citizen-driven journalism is also cited as one of the factors that favour the spread of disinformation among information circuits at the fringes of the media landscape.

The central role of mainstream media in spreading information disorders is counter-intuitive with respect to the widespread notion that disinformation thrives mainly in small, informal, non-professional media initiatives and networks. However, TV formats privileging entertainment over information propose debates with politicians and pundits spreading disinformation so as to attract more audience.

The fight against disinformation: strategies and risks

The strategies devised to counter disinformation are not exempted from risks, which are nested in the equilibrium between freedom of information and security, both recognised as fundamental human rights.

Full support for media literacy policies should be promoted everywhere possible, in order to strengthen social resiliency against disinformation. Media literacy does not correspond to higher levels of education, since multiple academic studies proved this correlation false.

The quantity and speed of the information flow make its handling overwhelming and psychologically challenging for everyone, even leading to mental health issues (another under-researched nexus). This shows the need to educate the wider citizenship in news filtering, first by teaching how to separate relevant from non-relevant news, and then by discriminating true from false news.

There is a shared sense of urgency for providing the young generations with educational tools that can help them navigate the media sphere and recognise and address disinformation. Media literacy is deemed an essential element of educational curricula and its implementation should be a high priority for public authorities. Beyond including media literacy in school programmes, it is also important to train teachers.

Regulating the digital space is also crucial. Examples in this sense include the European Digital Service Act (DSA) and the promotion of strengthened codes of practice for information management, possibly by co-regulatory approaches that include the creation of independent bodies. The EU is the strongest available political space to bargain with the all-powerful big techs.

Finally, sanctions against actors that engage in hostile manipulation of the information flow should be considered. They may include imposing political and economic costs which should be temporary, reversible in their application, and proportional to the inflicted damage.

Fact-checking (the structured and systematic verification of information) is a successful strategy against disinformation as well. Content verification aims to establish the veracity of a piece of information, but also to analyse the context and reasons behind why certain content is presented in a specific way. A frontline role of civil society and NGOs is recommended and preferable to the direct intervention of government institutions.

However, professional fact-checking alone is insufficient, because news sharing is a process faster than its verification. Equipping citizens with verification tools reduces the burden on organisations and newsrooms professionally dedicated to fact-checking. A number of these tools exist online, but citizens lack the knowledge about how to benefit from them: initiatives that aim to raise awareness about the accessibility to these digital tools are desirable.

Finally, local teams for content moderation on platforms that work in the local language are a fair demand to platform companies relying primarily on AI (artificial intelligence) as a tool for content moderation, while stressing the necessity of a more applied human workforce. Platforms should also be required to provide researchers, journalists, and civil society organisations with more actionable data (likely in real-time) and push for algorithm transparency.

Notes on the Western Balkans

The main reasons for the permeability of the Western Balkans to malicious actors interested in disinformation have to do with the weakness of institutions, contested sovereignty, and internal rifts along ethnic lines. Advancing in the EU integration process could provide a fundamental safety net to counter these vulnerabilities. Yet, unsurprisingly, the enlargement project itself has been targeted by disinformation, which in turn is contributing to making the EU integration process less likely to advance.

Disinformation is an obstacle to the reconciliation process in the Western Balkans and is key to genocide denial narratives. Actors against reconciliatory policies weaponise disinformation by exploiting ethnic, social, and economic divisions, while disinformation linked to religious extremism is less impacting.

Media lack professionalism in terms of organisational and editorial transparency, and independence from external interferences. The flawed architecture of the media working in the region is considered one of the principal reasons for disinformation proliferation.

Mental health issues connected to information-linked disorders such as hate speech and online harassment are still out of the radar of public institutions and missing in the public debate, even if the pandemic made the situation far worse. There is a chronic lack of professional figures such as psychologists and educators that can contribute to a comprehensive action against information disorders.

The civil society sector is considered key for reconciliation, as it makes up for the absence or inefficiency of the government and inter-governmental institutions, and it should be supported in its efforts.

An urgent matter is the creation of a safe space free from fears of repercussions to foster dialogue between the young generations and the politicians.

Examples of success in the field of education were achieved in BiH by providing materials directly to school teachers, while Montenegro made a positive step when authorities gave a green light to NGOs working on media literacy in school curricula.

The transnational nature of disinformation makes it transferable by design and capable of travelling from its original thematic, geographical, technological, and cultural domains to new ones. Any long-term strategy that aims at efficiently countering disinformation should adopt a similar transnational approach, not only through a coordinated action among public entities, but also through cooperation between different social actors such as government, private businesses, civil society and media organisations. This multi-stakeholder approach is a precondition for any effective action against disinformation in the Western Balkans as elsewhere.