Donbass, the veil of hypocrisy has been lifted 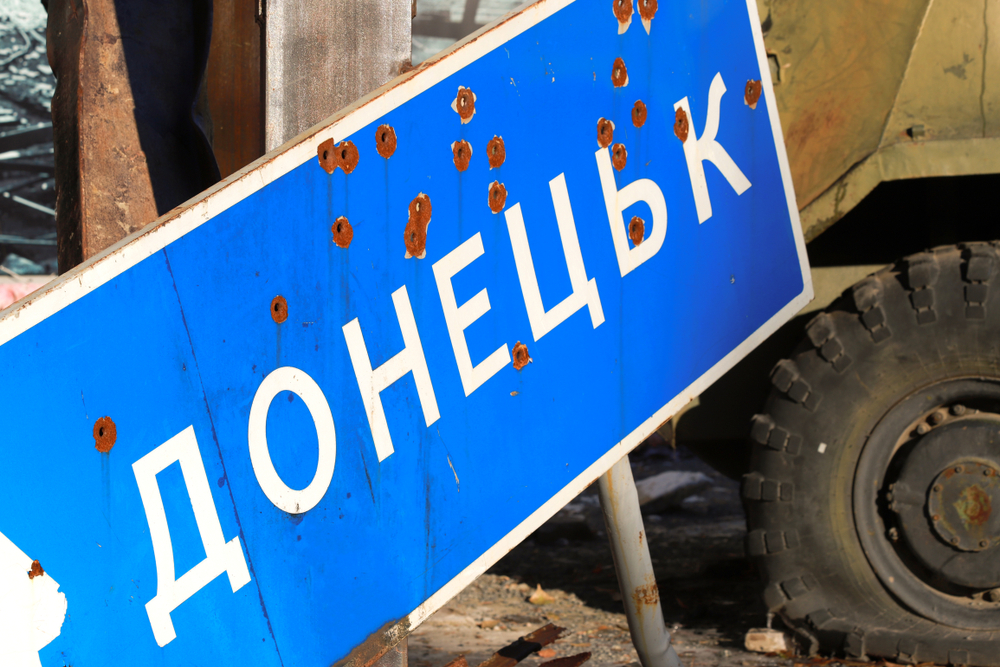 The aggression of the Putin regime on Ukraine has also removed the veil on the hypocrisy that has reigned in the Donbass from 2014 to today. What Moscow presents as a genocide conducted against the Russian-speaking population is nothing more than a mafia black hole

(Published in collaboration with East Journal )

On 21 February, Russia recognised the independence of the breakaway republics of Donetsk and Lugansk. The following day, the Russian army entered the two republics for a peacekeeping mission which, on the one hand, affirmed Russian sovereignty over the two territories and, on the other hand, prepared the invasion of the rest of Ukraine.

After years of hypocrisy and falsehood, the veil has finally fallen from the Donbass. Retracing the recent history of this region means delving into the maze of a conflict defined as "low intensity" but which, since 2014, has not stopped sowing death by associating political destabilisation and military control, common criminal practices, trafficking, settling of scores, and violence. What Moscow presents as a genocide conducted against the Russian-speaking population is nothing more than a mafia black hole.

In the aftermath of the Soviet dissolution, many old exponents of the nomenklatura were able to recycle themselves as tycoons and entrepreneurs thanks to the dispossession of public assets in a savage privatisation process that political scientist Steven L. Solnick called  "state theft". A phenomenon that took place in many regions of the former USSR, but which in the Donbass saw the emergence of oligarchic clans capable of taking political and social control of the region, severely limiting the formation of a civil society. An industrial region so rich in resources proved understandably attractive to the new generations of Mafia leaders who sought to consolidate their social and economic positions by taking formal control over the world of politics and law.

Years before Viktor Yanukovych became president of Ukraine, he and his family were already exercising control over the Donetsk region. Many of the most influential political and economic actors in independent Ukraine come from this region: former presidents Kuchma and Yanukovich but also Rinat Akhmetov, Oleksandr Yefremov, Borys Kolesnikov, more or less well-known names that have marked the fate of the region and the country. Thanks to them, the Donbass has become the temple of corruption, a place where harassment and abuse were routine, and the struggle between armed groups in the pay of opposing magnates bloodied the streets. Just before the war, life expectancy was two years lower than in the rest of the country, while the region recorded the highest European rates of opiate use and spread of HIV . And all this despite the region being worth a quarter of all Ukrainian exports. Wealth that, however, did not go into the pockets of the population.

It is in this context that the events that led to the birth of the separatist republics developed. As President Yanukovych fled the country, conflicts began to emerge within the oligarchic world that supported him. Mixed feelings spread among the population between those who considered him a traitor and those who felt instead that they had lost a point of reference in Kiev . We can understand this from an IRI survey  conducted precisely in those months that testifies to the malaise of residents in the Donetsk and Lugansk regions: only 40% of those interviewed considered the occupation of Crimea "a threat to national security" against 90% of residents in the central-western regions.

Similarly, as many as 30% expressed the need for "protection for Russian-speaking citizens". However, favour towards integration with Russia was not high: 33% in Donetsk, 24% in Lugansk and Odessa, 15% in Kharkiv, showing that even in the eastern regions of the country there were great differences and it was not at all true, as was then affirmed and continues to be repeated by many, that in the east of Ukraine the population was largely in favour of integration with Russia. In fact, a 2018 study  found that the war did not change the Ukrainian identity in the Donbass population which, therefore, is something more than simple linguistic belonging.

While the revolutionary front was consolidating in Kiev, unrest began in the east of the country. In March 2014 there were clashes in Kharkov, Donetsk, and Lugansk, with the occupation of municipalities and local institutions. According to OSCE observers , the police forces either did not intervene or showed solidarity with the pro-Russian demonstrators. In April the administrations of Kramatorsk, Sloviansk, and Mariupol were occupied, this time with the support of armed men, mostly paramilitaries from Russia . The Russian origin of the militiamen and a large part of the demonstrators who occupied the various municipalities is proof that, from the beginning, it was never a civil war but a "Crimean scenario" made up of agitators and irregular troops sent by Moscow to destabilise and eventually occupy the eastern regions of Ukraine.

This led to the proclamation of independence of the People's Republics of Donetsk and Lugansk, respectively on 7 and 27 April 2014. In the month of May, a confirmatory referendum was held in the two republics, registering a 90% consensus – a figure that contrasts strongly with that collected just a month earlier by the IRI survey and that appears completely unlikely. Meanwhile, fighting intensified with the arrival of armoured vehicles, heavy artillery, rocket launchers, and anti-missile systems of Russian origin. In July, Malaysian Airlines Flight MH17 was shot down killing 298 people. An international investigation concluded  that the plane had been hit by a surface-to-air missile from the base of the 53rd anti-aircraft brigade in Kursk, Russia. At that point the veil on the Ukrainian crisis had already been torn, but for a long time people did not want to see the person responsible.

The efforts of diplomacy led, in September, to the Minsk Protocol, known as "Minsk I": the line of contact between Ukraine and the two separatist republics was established; immunity was established for "all participants in events in the Donetsk and Lugansk regions" without distinction between common crimes and war crimes; local elections were established in the presence of OSCE observers (which were finally held on 2 November without respecting any of the transparency conditions provided). Thus began a new phase of negotiations which, in February 2015, led to the Minsk Agreements (known as "Minsk II").

After the signing of the Minsk agreements (February 2015), a phase of relative stability began even if between 2017 and 2020 there were more than 900 civilian victims. The economic situation in the two separatist republics was however made difficult precisely by the Minsk Agreements, which prevented economic relations with Moscow. The absence of banking connections with Russia prevented factories and companies in the "people's republics" from having the necessary liquidity to maintain production. In this situation, South Ossetia became the last resort: after establishing official relations with Moscow, Donetsk, and Lugansk, the small Georgian breakaway republic became the intermediary through which Russia transferred funds and payments to the Donbass. Between 2014 and 2018, foreign direct investment was less than one percent of the Donbass' GDP. Companies are hesitant to invest resources in an area where artillery exchanges occur on a daily basis. For this reason, the economy is struggling to develop and has been particularly affected by the Covid-19 pandemic, spreading further discontent among the population.

The economy was monopolised by separatist-owned businesses. A row of local leaders started a true economy of robbery, nationalising and controlling local industries. Wages have plummeted to historic lows. Anyone who was able to leave the two regions has already done so. Almost two million emigrated to the territory under Ukrainian control. Faced with the collapse of the local economy, the destruction of civil and industrial infrastructures, the separatist leaders acted like actual mafia bosses , imposing their own law with violence. Among the best known it is worth mentioning Aleksandr Borodai, first head of the republic of Donetsk, who today sits in the Russian Duma, and Aleksandr Zacharcenko, capable of building a small empire by extorting money from restaurants and supermarkets, before being killed in 2018 by a car bomb placed by some internal rival.

The two separatist republics have cost Russia billions of dollars, as Moscow was forced to pour money into the coffers of the separatists, who have not shied away from making personal use of it. The Russian semi-colonial regime in the Donbass would have been unsustainable in the long run. Perhaps this is also why Moscow has decided to recognise the two republics, exiting the Minsk agreements and taking direct control of the region. The small local bosses are thus replaced by the only real warlord, Vladimir Putin.