Turkey: the treasure in the cave at Divle 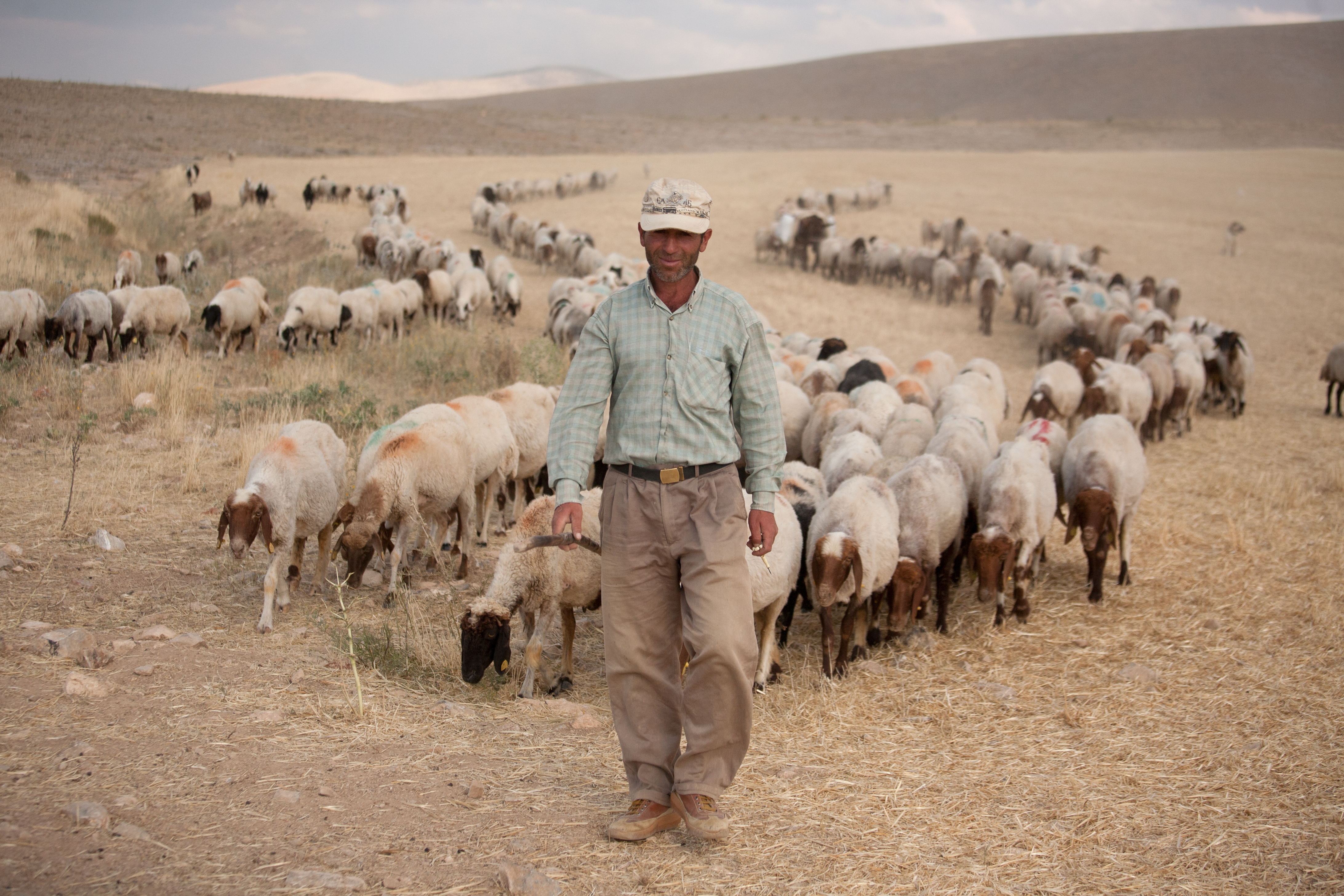 At Divle, on the Anatolian plateau in Turkey, the traditional “tulum” cheese has for centuries been preserved in sheep and goat skins inside a deep cave at the edge of the village

The dull hum of the little, open lift that lowers two people at a time, accompanies the vertical passage between two completely different worlds. From the wind-swept plateau flooded with violent light, we suddenly drop to the intimate coolness of the cave where the shadows stretch out, until all that remains of that July sun's glare is a milky, almost intangible haze.

As our eyes become accustomed to the dark, the electric lights suddenly come on. A surreal vision appears with a magical flavour: on broad pine-wood shelves which line the walls of the narrow passage lie a small army of silent sacks: some small, white and smooth, others bigger, covered with black or reddish skins. 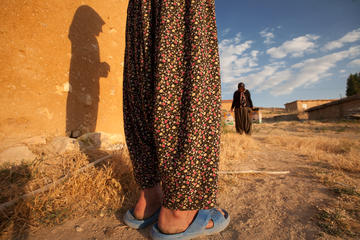 This is the secret treasure of the cave: in their containers, carefully made by patient hands from sheep and goat skins, stand the cheeses with mould, the “tulum” of Divle, descendants of an ancient tradition lost in the legends which flourish in the infinite space of Anatolia.

In central Turkey, we are on the road from Karaman to Eregli. The Mediterranean is not far to the south, but to reach it we would have to cross the high mountains of the Taurus, covered with snow well into the summer. All around, the plateau, bathed in sunlight, is a semi-arid, endless steppe. The Turks have a special name for the barren landscape of Anatolia: “bozkir”, translated approximately as “yellow pasture”, for thousands of years the undisputed realm of nomadic herds and shepherds.

The plateau has acquired all the pastel shades of that colour, from straw through saffron to ochre.

Only the water courses which cut deeply into the interminable tableland are lined by luxuriant rows of willows and poplars with dramatically dark green branches. Going up one of these lush canyons one comes to Divle, 300 people and 3,500 sheep and goats, in one of the most remote and fascinating parts of the region.

“The livestock have always been at the heart of the human presence on this land. Even before the sultanate of the Karaminids who over the centuries built a powerful state here on the Silk Road”, we are told by elderly Talat Duru “bey”, the local historian and living memory, over a steaming cup of tea. “For the nomadic shepherds the animal skins provide the most logical means for preserving the cheese, so that is how the 'tulum' or 'sack cheese' was invented. And using caves to preserve foodstuffs is a very ancient solution, once common, though now almost forgotten.”

The magic of the Divle cheese comes from the fortunate combination of these two traditions. In the natural cave just outside the village, special microclimatic conditions favour the development of mould in the cheese, thus giving it a unique, unrepeatable consistency and aroma.

“No-one knows when the cave began to be used for making our cheese; not even our elderly have any recollection”, Ibrahim Bayrak, a cheerful youth from Divle now living in nearby Agizbogaz tells us energetically. Hard work and enterprise have enabled Ibrahim to set up a small dairy where he uses the milk from many villagers to make cheese. “Production techniques have remained unaltered for centuries, even if every family uses a slightly different recipe from the original one.”

To see production in progress at its most traditional, we go up to Kaybeyli, a few square houses with roofs of turf built alongside a minor watercourse, following a dusty track dotted with flowering thistles. Here Sibel Kuthaya and her family work under a lean-to roof, improvised but functional, made of sticks and covered with a wide waterproof cloth. 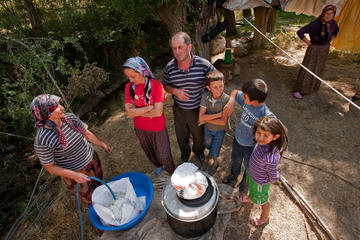 Sibel is a simple woman, beaming while she shows us how she works. Her two children stay shyly attached to the folds in her “shalvari”, the baggy trousers common in most of the Muslim world. “After being made into curds, the cheese, made from exclusively sheep and goats' milk, is left to rest for a whole day. Then it's pressed under big, round rocks and finally salted. It rests for a further eight to ten days, before being crumbled and wedged by hand into the skin sacks.”

Preparing the sacks is a long, painstaking job: after being scraped the skins are washed, salted and dried in the wind on the plateau for several days. Kept in a well-aired place for at least a year, they can only be used once.

“The 'tulum' is taken into the Divle cave in the production season, which goes from May, when the pastures are still green, to September. There it remains for about four months. In this period,” Ibrahim explains, accompanying his words with illustrative gestures, “the fungus of the Roquefort stock is disseminated into the sacks. When the sack becomes covered with a thin purple layer then the cheese is mature, ready to be eaten. There are many ways to savour it,” continues Ibrahim, as a sly smile spreads over his sun-burnt face. “For example in dishes based on filo pastry like 'burek' or 'gozleme', but specially as a starter, maybe with melon and a glass of good 'raki', the Turkish brandy with an aniseed flavour.”

In the village, cheese production is a collective task which usually involves not so much the individual families as the “komsuluk”, that is the close neighbours. The product today is mostly used for private consumption or sold through the channels of personal connections.

The cave can contain up to 70 tons of cheese. Present production however does not exceed 25-30 tons annually, and recently it has dropped to just 13-14 tons.

“The village has few young people: in previous decades emigration to cities like Istanbul and Izmir, but also to more distant places like Germany and Holland, emptied it,” the “muhtar” (mayor) of Divle since 2008 recounts over the unfailing glass of “Cenan Kuthaya” (tea), in his sparsely furnished house. “In the 70s three thousand people lived here and the livestock numbered more than 18,000. Today we are barely three hundred, each family having little more than a hundred beasts. It's difficult to carry on traditions when new generations prefer a different life, far away”.

Not only depopulation endangers the tradition of the “tulum”. The Anatolian plateau has a fragile ecosystem affected today, with Turkey's tumultuous economic development, by the growing pressure of human exploitation and also the global situation of climate change.

“The region of Karaman, and in particular the area around Divle, has low rainfall, and with global warming the risk of desertification grows,” maintains Zafer Yasar, an agronomist at Karaman and member of the Slow Food movement in Ankara, personally involved for many years in the complex effort to save the “tulum” of Divle. “The risk is increased by the industrialized agriculture round Karaman, which makes massive use of the underlying water-bed, which could lead to the salinisation of cultivated land, with consequences for the whole ecosystem.”

Born on the line which separates and unites light and shade, suspended between the endless stretches of Anatolian pastures and the narrow cavities deep underground, the “tulum” cheese of Divle finds itself today at an even more delicate crossroads – between the past and the future.

“This piece of culture, of knowing and savouring, cannot survive alone. To be handed on to future generations, the social, environmental and cultural roots need saving,” says Zafer with conviction. An open challenge for Turkey, which is changing, growing and rapidly updating, but which, on the way, risks losing the breathing space of great expanses, and the flavours which gave it its soul.