Turkey, one university against the regime 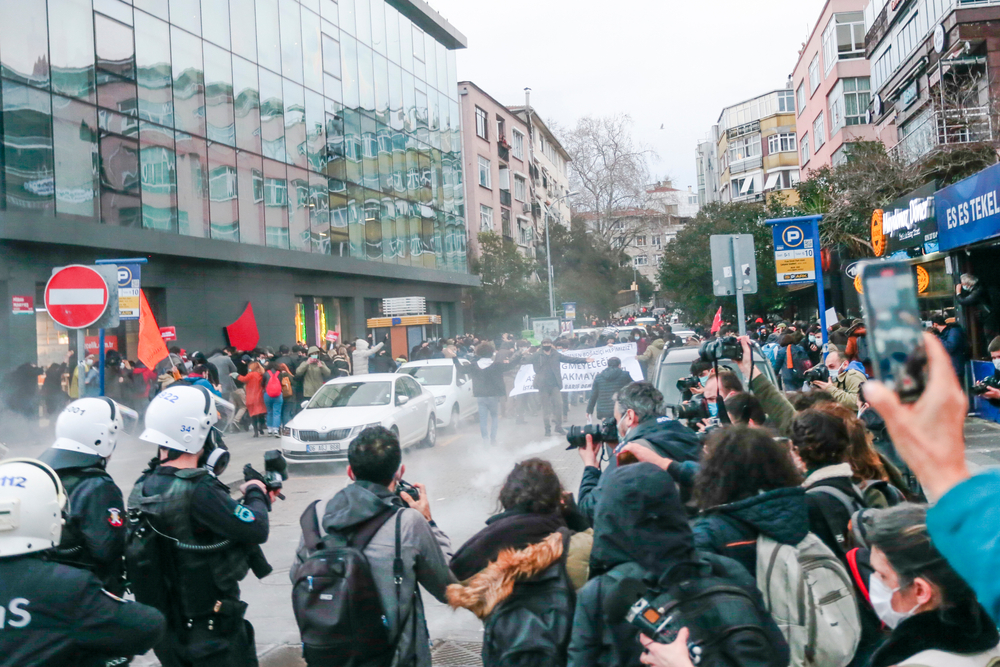 For 45 days students and academics at Istanbul’s prestigious university Boğaziçi have protested the appointment of new rector Melih Bulu, a member of the ruling Justice and Development Party (AKP)

The protests began on January 4th, after President Erdoğan appointed Melih Bulu as the new rector of Boğaziçi University. While students have organised peaceful sit-ins on campus, faculty members have stood outside the rectorate for the last 45 days, their backs turned against the building. They all demand Bulu’s immediate resignation.

According to the Boğaziçi Solidarity Platform, some 500 students have been detained since protests began. 25 have been sentenced to house arrest, and 10 arrested on charges of “degrading or provoking the public to hatred and hostility” and “resisting to prevent fulfillment of duty” of the Turkish Criminal Code.

Boğaziçi has long followed the tradition of appointing rectors from within, through internal election by the faculty. In 2016, this authority was transferred to the president’s office following an emergency decree in the aftermath of the attempted coup. The same year, President Erdoğan appointed Mehmet Özkan. But unlike Bulu, Özkan was a Boğaziçi professor at the time. And unlike Bulu, he did not plagiarise his doctoral thesis and essays.

Naturally, Bulu’s appointment has set off a battle between the conservative government and the academia. Critics in Turkey see the appointment as interference with academic freedoms and violation of the democratic values of the university. Others have joined the calls on the government to stop the crackdown.

In a tweet , the UN Human Rights office condemned comments by officials and called for a prompt release of arrested students and protesters. MEP Nacho Sanchez Amor also expressed concern over recent developments, while the US State department spokesperson condemned the hateful rhetoric used by officials against the protesters. Turkey’s Foreign Ministry rejected the mounting criticism.

Meanwhile, other universities both in Turkey and abroad have expressed their support. “We the undersigned stand in solidarity with the students and faculty of Boğaziçi University. We call upon Professor Bulu to decline the position and we call upon the Turkish government to release any students still in custody, withdraw all charges, and respect academic freedom and university autonomy”, read one solidarity letter with over 4,000 signatures representing international organisations and academics from all over the world.

Residents of some neighbourhoods in Istanbul have expressed their support by banging pots and pans every night at 9pm – a tradition that was introduced during the Gezi protests in 2013.

The banging of the pots and pans may not be the only similarity between the two protests. The protest is yet again driven by young people of diverse political and cultural backgrounds against a controversial decision by the head of state. During the Gezi protests, Prime Minister Erdoğan called protesters “riffraff”; this time, he has accused students of being terrorists.

And yet, despite the parallels, the protests at Boğaziçi University come at a different time for Turkey. Since 2013, the government has amassed control over independent media and jailed many of its critics, including over 1,000 academics. It is also responsible for economic decline and the soar of youth unemployment that has reached 24% .

“You are not a sultan, and we are not the subjects”

After Bulu’s appointment, President Erdoğan issued another decree, ordering the opening of Law and Communication Departments at Boğaziçi University. In response, Boğaziçi students wrote : “You appointed a trustee rector to our university with utter disregard for the students and faculty […] To top it off, you open faculties and appoint deans […] Your attempts to pack our university with your own political militants are the symptom of the political crisis that you have fallen into […] Do not mistake us for those who obey you unconditionally. You are not a sultan, and we are not your subjects […] We declare that we stand united with those who fearlessly speak the truth, and we are against all government-appointed trustees”.

Back at the rectorate, Bulu’s position remains unchanged. The newly appointed rector has no intention of resigning, expecting that the protests will fade in six months – by summer break. Boğaziçi students say they will not stop until their demands are met.