Gezi and the HDP: a wedding never celebrated 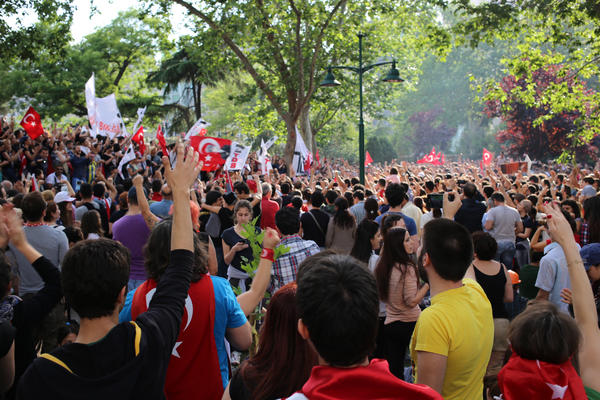 The protests in Gezi Park - (photo by Arzu Geybullayeva)

What is the weight of the Gezi Park movement in the electoral success of the HDP at the political elections held in Turkey last June 7th? A comment

A quick reading of the political manifesto of Turkish party HDP (People's Democracy Party) could make one think that, two years after the protests that shook Turkey, a political formation able to embody the spirit of Gezi Park and its claims finally emerged. It did not. The legacy of Gezi Park is much more complex, dispersed in the depths of social fabric. It sometimes re-emerges in new forms, difficult to confine in the frame of a single party. Perhaps, its effects in the longer term are yet to manifest completely. The unequivocal success of the HDP is the result of many factors, including Gezi Park, and its ideas were far from being decisive.

What remains after the protests

Once the noise of sirens faded, the air was cleared of tear gas and back to city smog and wind of the Bosphorus, the participants in the 2013 protests wondered what would follow, what would change.

What happened in those weeks of riots has been extensively studied. We know that participants came from very different cultural, ethnic, and social backgrounds and took to the streets united by common desires and needs: care of public affairs and the environment, democracy and participation, civil rights, free and independent information. Several, however, were the horizons and prospects of this heterogeneity, and a past difficult to erase still weighed and weighs in the deep divisions in the country.

In the vast sea of ​​the Internet, a privileged environment for all the protesters that no longer had confidence in traditional media, there was a proliferation of initiatives that found common ground in the Taksim Platform, where people tried to collect and coordinate the demands of the square and then turn them into effective politics through direct negotiations with the government.

Once taken off the streets, the protest tried to survive and took refuge in moret discreet contexts, more suited for debate, but without returning to the anonymity and inaction of private homes. Far from the spotlight and the batons, the smaller neighbourhood fora were able to host moments of discussion and direct, concrete, everyday activism. The price imposed by this new intimacy was the disappearance from the radar of national and international media. The momentum got lost in a myriad of unconnected streams and initiatives focused on specific issues, like the protection of environmentalism or individual minorities. Many of these initiatives ceased to exist within a few months, while others remained active, expression of a civil society that was no longer willing to accept the ballot as the only moment of democratic vitality.

The neighborhood fora were certainly not the only bud dispersed into the wind from the trees of Gezi Park. Some people decided to immediately consolidate the movement into a political party, unimaginatively called Gezi Party. An experiment which proved premature, perhaps the child of a political speculation which sought its fortune in simple associations, and that ultimately turned out to be short-lived and with null results.

In general, participants in the Gezi Park movement retained their political preferences. Those who had voted for a party in the past continued to support it, with the most active trying to contaminate it with the demands of the protests. This is the case, for example, of the many young people linked to the CHP (Republican People's Party) or the Kurds linked to pro-Kurdish BDP (Peace and Democracy Party). Those who had no political preferences maintained a civic affiliation without taking sides with a specific party.

What therefore characterised the post-Gezi period was, on the one hand, fragmentation and organisational dispersion; on the other hand circulation of ideas through new paths, especially among young people and on the Internet, because what happened could not be erased or forgotten.

The birth and success of the HDP

Through its political manifesto, the HDP definitely embraced many of the demands of Gezi Park. The leadership of the new formation identified a segment of society, far from both nationalism and the traditional left, that no longer identified with existing parties and was looking for a new political subject. The HDP was an attempt to provide an alternative, but that does not mean that it was a successful attempt.

The HDP is a coalition, for now successful at the ballots, which tries to reconcile and bring together different souls who are far from each other and, not infrequently, in conflict. On the one hand, the Kurdish movement – including those who are interested in the ethnic claim but, as religious people and former electors of the AKP (Party of Justice and Development), remain distant from the more progressive ideas of party and difficult to engage on, for example, LGBT rights. On the other hand, a modern and liberal left that, while sharing the Gezi Park ideas that made it into the HDP election manifesto, is wary of the new party because it considers it still too tied to the Kurdish question and its political organisations, in particular the PKK. Such distrust will probably weigh in on the future of the new party.

The HDP is a novelty of no small importance in the Turkish political landscape, and Gezi Park has contributed to create and shape its ideas through a charismatic leadership, able to "sell" a diversified public an all but simple coexistence in order to achieve electoral success.

Yet, electoral success cannot be explained with the Gezi Park ideas, but with reasons of political calculation, in particular the dislike that Erdoğan had earned across the population as well as among his political opponents. Not just the HDP, but all opposition parties (and probably some members of the AKP) were interested in the new party exceeding the minimum threshold for access to parliament, the disputed 10% established by the laws enacted after the 1980 coup. This was the only effective way to prevent the AKP from reaching a majority that would make it able to unilaterally pass the presidential reform promoted by Erdoğan. It is on this issue that the elections of last June 7th were played. This issue dominated and overshadowed all others, including those related to Gezi – except perhaps some fears over the economy.

A vote for the HDP was for some a vote in support of the Kurdish cause, for others in favour of the Gezi Park demands, but for all it was a vote against Erdoğan, his disdainful authoritarianism; his reckless administration of democratic life; his presidential project; his irritating and sluggish handling of the Turkish-Kurdish peace process, reduced to a political tool; and, finally, against the specter of the economy slowing down, an economy that the AKP does not seem able to keep alive as in its first decade of government.

These are the reasons that led to the loss of support by Erdoğan's AKP. Of this change the HDP was the main, but not the sole beneficiary; just remember the success of the nationalist MHP. And many believe that a presidential election without the presidential dilemma, or even without Erdoğan's bulky presence, would give very different results.

Surely some among the HDP voters have embraced the ideas of Gezi, to which the party is certainly in a spiritual debt. However, that spirit of change cannot be confined within the narrow frame of a single party. Gezi Park was a movement (and, as is worth reminding, a minority movement) all modern, progressive Turkey benefited from – a cross-party movement, far from the institutions, and for this very reason political in the noblest sense of the term.