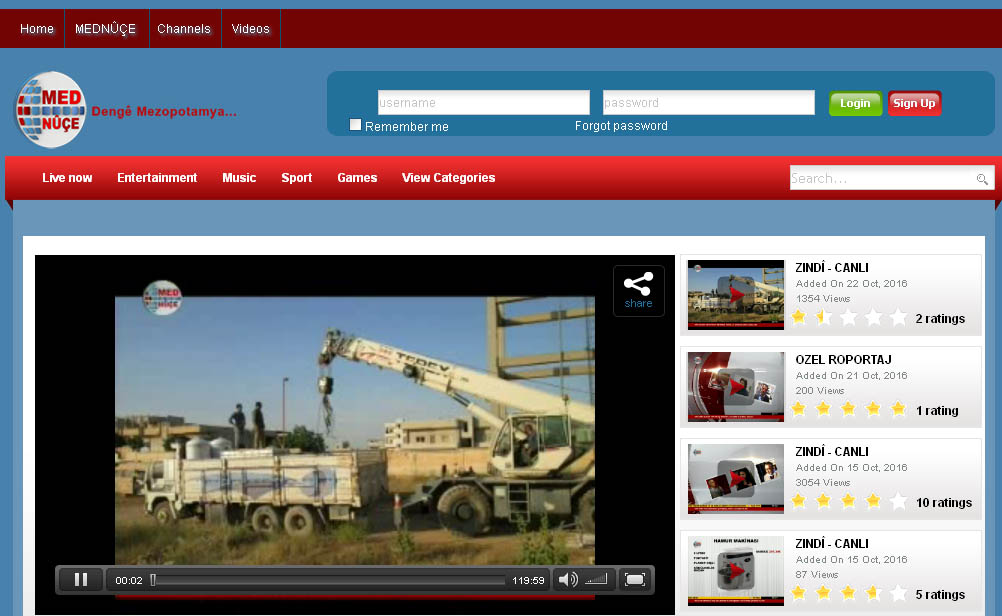 A Kurdish television station based in Italy was blacked out at the request of the Turkish authorities. The reconstruction of the occurence

Ankara's censorship of the Kurdish media has reached Europe. Med Nuce (news from the Middle East, in Kurdish) – a network legally based in Italy (Campobasso) and broadcasting from Belgium, Norway, and Sweden – was suddenly blacked out in early October. The decision was made by French company Eutelsat, one of the world's leading satellite operators, that serves as speaker to over 4,000 TV channels, including so far the Kurdish network.

Rodolph Belmer, General Director of Eutelsat, when answering to the French Senate's Committee for Economic Affairs on the matter, said that the measure was taken in response to a request by the Turkish authority for the regulation of the media (RTUK, High Council for Radio and Television). "The RTUK notified us of the decision to suspend the broadcast of a Kurdish channel that they believe infringes Turkish laws. We complied, pending the decision of the authorities of the three countries where the station broadcasts", said Belmer.

As part of its activities within the ECPMF  project, OBC Transeuropa is curating Wikipedia entries on media freedom. The list of the entries updated so far is available here .

Antonio Ruggeri, Chief Editor of Med Nuce in Italy, said he only received a four-day notice and harshly criticised the satellite operator, stating that "Eutelsat is negotiating a contract for launching satellites for military and policing purposes in Turkey. In return Erdoğan, through RTUK, requested and obtained to turn off our station. We denounced that, and no one has denied", said Ruggeri.

Meanwhile, Marietta Tidei and Sandra Zampa, deputies of the Democratic Party, raised the question in the Italian Parliament , asking how the Italian government "intends to facilitate, to the extent applicable, a solution leading to the restoration of press freedom and freedom of expression that appear to have been denied to a private satellite television channel, headquartered in our country, that appears to be in good standing with both licenses and payments".

In turn, the European Federation of Journalists (EFJ), condemning the episode , recalled that just a few days before, in Turkey, Turksat – the only satellite operator in the country – had blocked about twenty radio and television stations. Issuing a special decree law under the state of emergency, the Turkish government blacked out several Kurdish-language television channels, including Jiyan TV, Azadi TV, and Zarok TV (Zarok TV, by the way, only broadcasts cartoons). Other Turkish-speaking channels that voice opposition and minority stances, like IMC TV and Hayatın Sesi, already excluded from the Turksat platform, were also banned from broadcasting on the web.

The case of Med Nuce sparked wide mobilisation in Europe, including the Kurdish community, the press, and trade unions. Jean-Louise Malterre, one of the lawyers of the Kurdish network in France, announced an upcoming appeal against Eutelsat.