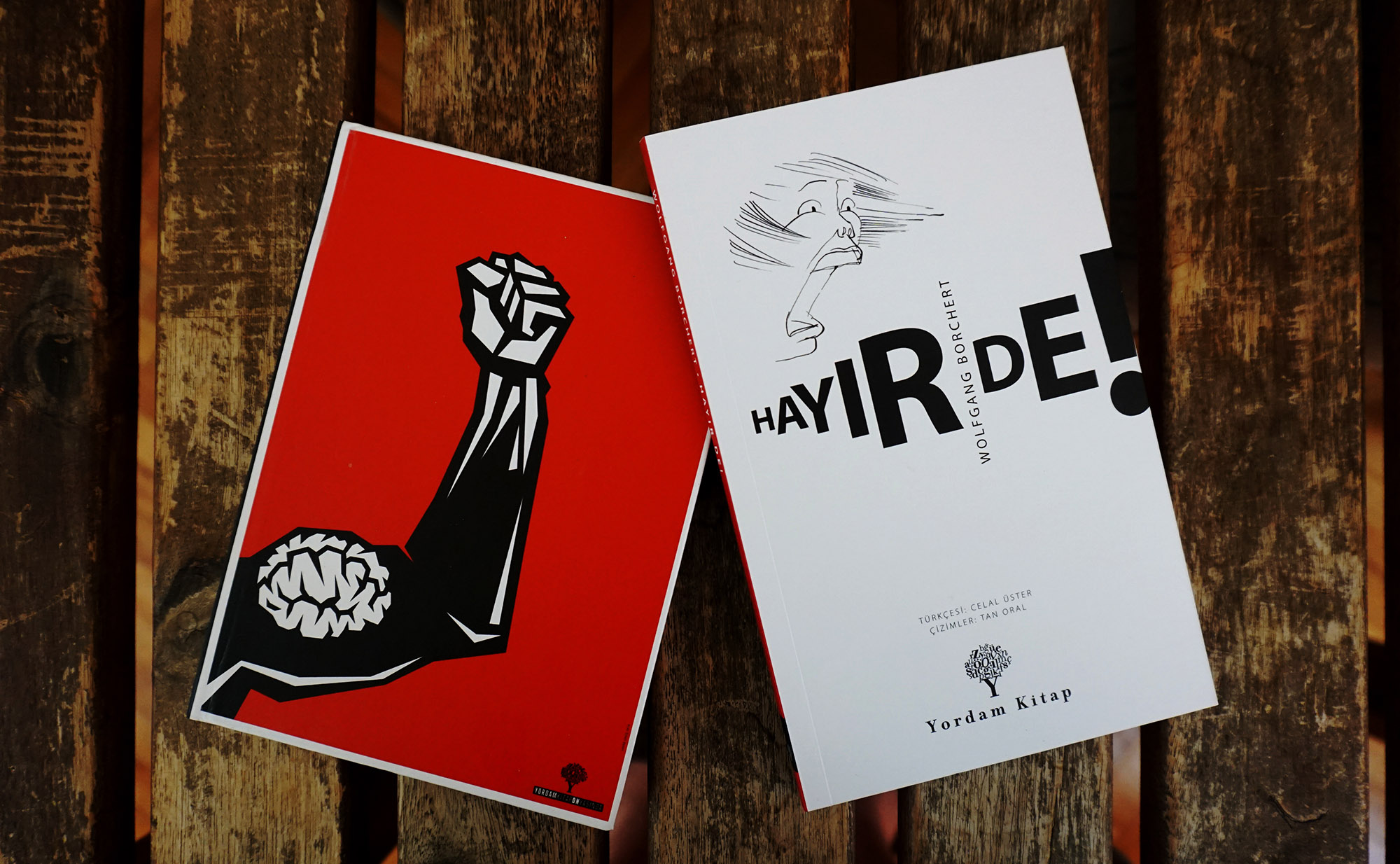 On the eve of the constitutional referendum in Turkey, Yordam Kitap publishing house issues Wolfgang Borchert’s manifesto, giving it the emblematic title “Say no!”. An interview with editorial director Hayri Erdoğan

“You. Man at the machine and man in the workshop. If tomorrow they tell you you are to make no more water-pipes and cook pots but are to make steel helmets and machine-guns, then there's only one thing to do: Say NO!” - Wolfgang Borchert, 1947

Mr Erdoğan, could you please explain the reasons why you decided to translate and publish Wolfgang Borchert in these days? Why did you choose this work of him, written right before the author’s passing and that – unlike his numerous and tragic war narrations – conveys a strong message of hope?

Though it was written in 1947, with this manifesto Borchert aimed at sending a universal message, in line not only with his artistic experience but also with his own life. It is a scream against war and fascism all over the world. Borchert did not only want to give a first-hand report of the horrors he experienced during the Second World War – in fact, it is a warning against an intrinsic threat he felt in the years following the war, the danger that it could all suddenly start again. Since today we are witnessing a similar threat, it looked suitable to issue an edition – the first we have published – of this message of hope by Borchert.

Wolfgang Borchert and his "Manifesto"

Wolfgang Borchert (Hamburg, May 20th, 1921 – Basel, November 20th, 1947) was a German writer. A leading figure of the Trümmerliteratur (rubble literature), his works dealt with the experience of the German population after the Second World War addressing especially the youth, coming home to destruction, indifference, and uncertainty towards the future. In his pamphlet Das ist unser Manifest (This is our Manifesto), the writer explains his point of view concerning art and literature, and stressed the uselessness of the “good grammar” as well as the importance of having authors that take clear stands when it comes to actual issues – “We need poets […], that say tree to a tree […] and say yes and say no”.

Does the message of the book resonate with what is happening right now in Turkey?

It does. We are observing a historical period of rebirth of fascist tendencies – both in politics and in the labor market conditions. The country might end up with an authoritarian regime, completely centred arounda single individual. Printing this book is in line with the acts of resistance of an opposition that, luckily, we still witness. Borchert’s words will not sound as something new to those who fight against the country’s authoritarian course on a daily basis. In fact, being the fundamental values the book wants to convey the same they support and stand for, these people will identify themselves with the author’s writings and hopefully gain courage and hope.

In his work, Borchert addressed many different people – each one with his or her own role in society – urging them to answer “NO” to war and to fascism. What do you believe is your duty as a publisher?

Printing a book is in and of itself a clear message about the issues we are experiencing. Actually, the book itself as a tangible object is an act of resistance. Every book contains ideas that can be released and may take root in society – this is the role of a published, facilitating the circulation of ideas to oppose the taking over of fascism.

Yordam Kitap publishing house was founded in 2006. What has changed throughout these eleven years of publishing activity?

We launched this publishing house with the philosophy that the world needs a change and that this change could be eased through our books. We took Marxism as our main source of inspiration and – to showcase this philosophy – we published over 300 books: hope exudes from our pages.

However we are living difficult times, when books are more and more often becoming dangerous objects – not only have they been forbidden and cannot be published in some countries, but even writing or reading certain books could represent a dangerous choice.

Yordam Kitap publishing house was founded in 2006. It publishes mostly classic and modern works with a Marxist angle, as well as writings related to pragmatic socialism. It mainly covers the fields of philosophy, economy, politics, and history.

Did this happen to you personally, or to your company?

Luckily it did not, not yet. Still, we are living in a condition of constant anxiety and fear, where the future may have bad surprises in store for us. A publishing house as ours could easily be shut down, as it happened for other similar enterprises belonging and supporting the leftist ideas – among them Evrensel. Even outside the publishing world you can feel the repression – in the universities and against many academicians that have been thrown out, as well as in journalism. The state of emergency – adopted last year after the alleged failed coup – has made all this, including actions of repression, much easier.

Talking about the future, April 16th is approaching – on that day, Turkish citizens are voting about the constitutional reform proposed by the government. You choose “Hayır de!” (“Say no!”) as the title for your publication – it looks like a clear message. Is this book a manifesto about the upcoming referendum as well?

The value of this work goes beyond this very moment – it is universal. Many books tell us much about the times we are living, even if they have been written in previous years or even in different eras. Thus, every generation should make the most out of the works it has. I personally believe that whatever the results of this referendum, there are hard times ahead. Should the “yes” win, they will still have to deal with a half of the country that does not support this government and its impositions. Most importantly, this would not magically solve the existing political and economical problems of the country, nor the Kurdish issue for example. A win of the “no” would be a signal of the people’s will to change and distance themselves from the policies that have been implemented in the past years.

Umarim Hayırli ol, I hope everything is going to be alright! *