Of the invisible and the disappeared. Notes from the Turkish-Greek border 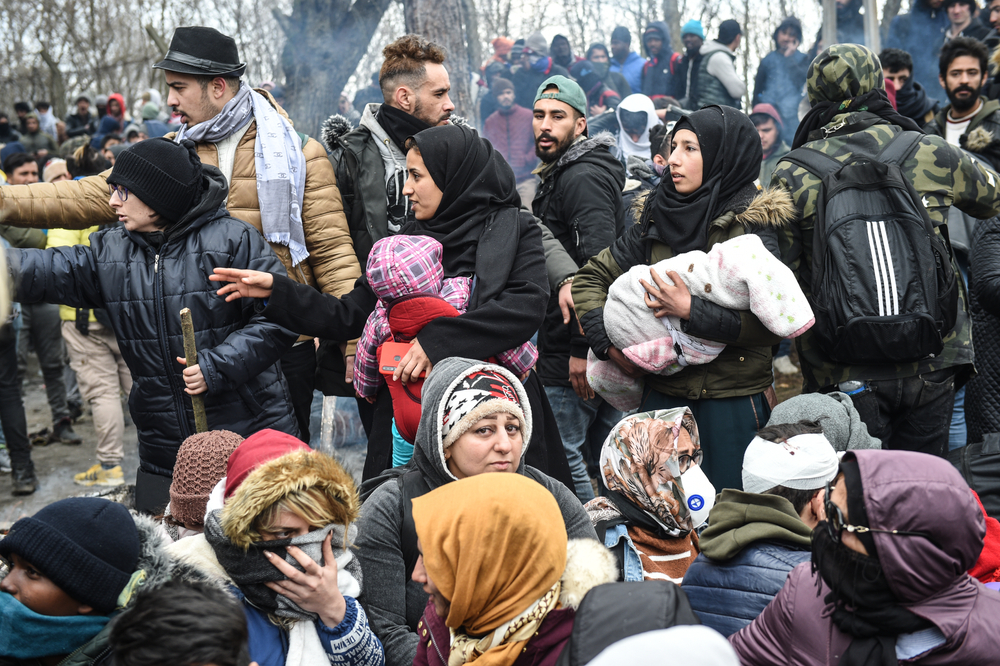 Two Turkish sociologists and journalists went to see with their own eyes what is happening on the border between Turkey and Greece. An intense reportage

(Originally published by Birikim on-line on March 2nd, 2020, selected and translated by Kaleydoskop )

On the morning of February 28th, the Reuters Agency shared two important news items: "An airstrike in Idlib killed at least 34 Turkish soldiers " and "Turkey has decided to stop preventing refugees from reaching Europe by land and by sea ". We could not believe what we read when the NetBlocks  Internet Observatory confirmed the blocking of social media in Turkey:  Facebook, Twitter, and Instagram were closed for hours . To verify with our own eyes what was happening, first we went to Zeytinburnu, where we had heard that municipal buses were leaving for the border. After walking around for a while we arrived in the square, that houses the governor's building and the municipal and provincial police headquarters, and we saw young men with backpacks and people intent on looking at them. According to what we were told, the municipal buses would take them to Ipsala, on the border with Greece, for 150 Turkish lira. In fact, we learned later, the municipal buses were free at first, but as they filled up migrants began to pay more and more. All this was happening before everyone's eyes.

We decided to go to Ipsala to understand how that trip would end. Along the way, we did not notice any particular traffic or anomalies. In the meantime, we managed to access Twitter and read that the passage of migrants had intensified at the frontier of Pazarkule, in the north, and we therefore diverted to Edirne. Although a woman who worked at the petrol pump told us that the traffic had been intense all day – despite not having seen any migrant buses herself – up to the border we did not notice any particular crowding or situation. Only in the centre of Edirne did we pass by a group of young people who launched slogans: "Martyrs do not die, the homeland does not divide". Then it started raining.

About a kilometre from the Pazarkule frontier, the road had been closed to traffic by police and gendarmerie. We parked the car, along with other vehicles left and right along the road, and started walking, but seeing that we were Turkish the police did not allow us to move forward. When we asked them about the small groups approaching the border, they replied: "They are foreigners, they leave not to return". The rain had increased. For about two hours we stayed, trying to understand what was going on. We saw small groups advance towards the border, mainly young men, families with children, elderly women arm in arm with young people and babies wrapped in plastic bags to shield them from the rain. Not only Syrians – there were also people from Afghanistan and Africa. Some, on the other hand, were much better equipped with weather-appropriate clothes. Contrary to the common practice of speaking of migrants in a uniform, stereotyped language, these details show the diversity of people who want to reach Europe from Turkey.

We also saw profiteers waiting to sell something to people who came to cross the border. They reminded us of the employers who make migrant children work in unsafe conditions in workshops improvised in basements for over ten hours a day, six days a week; of the older men who, with the blessing of the imam, take very young girls as second, third, or fourth wife; of the landlords owners who rent out their tiny, dilapidated apartments at exorbitant prices and then complain that rents have gone up beacuse of the Syrians, and of all those who, if questioned, immediately take refuge in the narrative of solidarity, proud of their good deed.

According to what we learned from a man who sold raincoats at 80 lira a piece, claiming that he himself paid 60 for each, 2-3,000 people gathered in the buffer zone between the two borders in one day. While some tried to cross the Evros from the border villages where waters are less deep, others waited for the opening of the Greek border creating a wall of flesh. Most of the people who arrived were in need, so – he told us – he sold some the raincoats at the same price he paid. As much as he stressed that these facts are a human drama, the greatest fear of that man – who has lived in Edirne for ten years himself – is that these people might not be able to reach Greece or return to where they came from, and therefore stay in Edirne, spoiling the fabric of the city described like a beautiful place, the pride of students and tourists.

At midnight, as we returned to the centre of Edirne, small groups of people intending to reach Europe continued to arrive at the border. We also saw people inside the city, mostly families with children, walking towards the transit point. We thought about what would have happened if those groups of people had met with the young people shputing slogans we had seen in the afternoon.

The following day elsewhere in Turkey, in Elbistan, news came of a lynching against Syrians following a demonstration of support for the soldiers; the news was later withdrawn and the population was asked not to give in to the provocations. Although it is still not possible to draw a precise picture of the possible consequences of these meetings across Turkey, it must not be forgotten that short-term policies can create great expectations in the population that "all Syrians will leave".

About an hour later, when we returned to Pazarkule, we realised that the road had been blocked by the police 2.5 kilometres from the border and we were unable to continue. We were told that the border had been closed and we had to go to Kapıkule to get through. Migrants were also sent back, together with people seeking shelter from the rain under the bridges, at stops, or under the ledges. Part of those people were heading for Edirne. We learned later that women and children were checked into the Foreigners' Home and the Expulsion Centre in Edirne that night. Having been unable to reach the buffer zone, we were unable to observe the type of humanitarian support provided by organisations such as UNHCR or the Red Crescent.

When we returned from Pazarkule to Kapıkule, everything seemed more peaceful – except for a long line of trucks parked on the side of the road, we met very few people. Once we entered the European route, however, the situation completely changed. We noticed crowds of people from Istanbul proceeding in the direction of Edirne; while the police stopped the vehicles going in that direction, they let people walk. It was really tough to see them as they walked in the safety lane. Families who pushed strollers in the cold, risking being hit by cars... All on the side of the road, invisible in the dark and rain.

For the next two days, people remained invisible. First they turned into numbers nobody agreed on. Thousands of people had crossed the Turkish border – 18,000 according to the President of the Republic of Turkey, 47,113  according to the Interior Minister; according to the United Nations International Organization for Migration, 13,000 people were waiting at the border ; according to the Greek authorities, 9.600  had sought to cross the border. In such uncertainty, figures no longer matter.

Ever since sociologist Renée Hirschon published her study on forced population exchanges between Turkey and Greece in 1922-23, most of those working on the topic have stressed that what has been lost with population exchanges is the culture of coexistence, but unfortunately few remember that we have not reached this point in a day, that all this is not just a drama of current events, that there are still many open issues behind us. So people remain invisible...