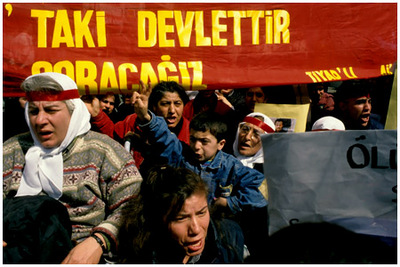 They risk imprisonment of 23 to 58 years. They are minors and Kurds. They are awaiting trial for their participation in the protests against the Turkish government last October. The debate concerns minors involved in political protests and violations of the rights of children by police and the judiciary

In October 2008, more than a hundred minors were in the front lines of three days of protests in the cities in Turkey's eastern and southeastern Anatolia. All the minors will be tried on charges of having committed a "crime in the name of the terrorist organization PKK".

Prosecutors have asked for sentences that range from 23 to 58 years for the "crime" which essentially consists of having thrown rocks at the police.

The wave of protests began after PKK had publicised the torture of their leader Abdullah Öcalan, imprisoned on the island of İmralı. The PKK incited ethnic Kurds to protest in the entire area from Diyarbakır to Batman, Hakkâri to Van, and Şanlıurfa and Mardin to Adana. The DTP (Party for Democratic Society) led crowds to throw rocks and shout slogans praising Öcalan in front of the ruling AKP (Party of Justice and Development) offices.

The many arrested included around a hundred minors between 6 and 17 years old, who now wait apparently on the judges' good will. In the first trial, children were acquitted in the city of Diyarbakır. In the city of Van, the children were not arrested but had to make a statement in the presence of a psychologist and were returned to their families. However, in Adana, the prosecutor presented as "evidence of crime", the marbles found in the children's pockets. In addition, in this case, the actions have not been yet defined as association with a "terrorist organization" or "breach of regulation on public rallies and gatherings", or a "simple throwing of rocks".

Previously, minors have been present in this type of political event, and subsequently received not especially gentle treatment from the police and the judicial authorities. Other children who had previously protested wait for their verdicts, some have been waiting for years, while growing up in detention.

Many people react in favour of protecting child rights. Jurists try to explain that, "the causes of child participation in such actions are clear; it should be ensured that they are not involved. Punishing them is not the way to protect them."

The DTP has also come under a storm of criticism for having involved minors in the protests. Prime Minister Erdogan called it "irresponsible and deprived of principles".

However, the prime minister must consider the loss of most of the Kurdish support that he received in 2005 when he and his party opposed the armed forces of the CHP (People's Republican Party) and the MHP (People's National Party), which pushed for military intervention in northern Iraq. At that time, Erdogan stated he wanted the "Kurdish issue" to be resolved internally, expressing acknowledgment of some "errors made in the past".

Currently, however, the Turkish prime minister and his government apparently have returned to former practices, and tend to follow the army directives in responding to PKK attacks. The October protests signalled the discouragement spreading among Kurds. Once again, things seem to be heading in the wrong direction, forced by the PKK guerilla's increased attacks and the Turkish military's intervention.

In an interview for the daily newspaper "Taraf", Ümit Fırat, one of the most influential Kurdish intellectuals in Turkey, says that the PKK and the Turkish army reinforce each other: "The military is not PKK's rival but its essential motivation". Similarly, the army "wants to maintain its influence not only concerning the Kurdish issue but in everything which concerns Turkey. For the military, maintaining their political influence is done through the Kurdish issue."

According to Firat, the PKK would benefit from the eventual prohibition of DTP, who follow Öcalan's directions, in that it will provide justification for its illegal activity. Firat observed that in order to reach a democratic agreement, Erdoğan and his party, who also closely avoided being banned, should broaden the space for dialogue by including all the stakeholders: "the head of state, the bureaucracy, foreign ministry, judicial authorities, the MIT (Turkish secret services), the government and the civic organizations."

The government hesitates on the issue. On one hand, Sezgin Tanrıkulu, president of the Diyarbakır (the Turkish bar association) stated that the AKP instructions to municipalities last summer on how to manage the "Kurdish issue", would indicate an approach "following the military's politics". This points to the unchanged position of the "Party for Justice and Development in considering the Kurdish issue not as a problem of democracy and identity, but as a public order problem and an economic issue."

On the other hand, amidst the October protests, Foreign Minister Babakan started a dialogue with Barzani, a Kurdish leader from northern Iraq, and for the first time recognized him as a political factor. In January, TRT (Turkish Radio Television) would launch a channel in Kurdish. Possibly, university faculties of Kurdish language and culture will be opened.

The local elections in March 2009 will partially indicate if the public considers government actions as a sufficient move towards a real opening, or if the politics is again the same song and only the choir has changed.