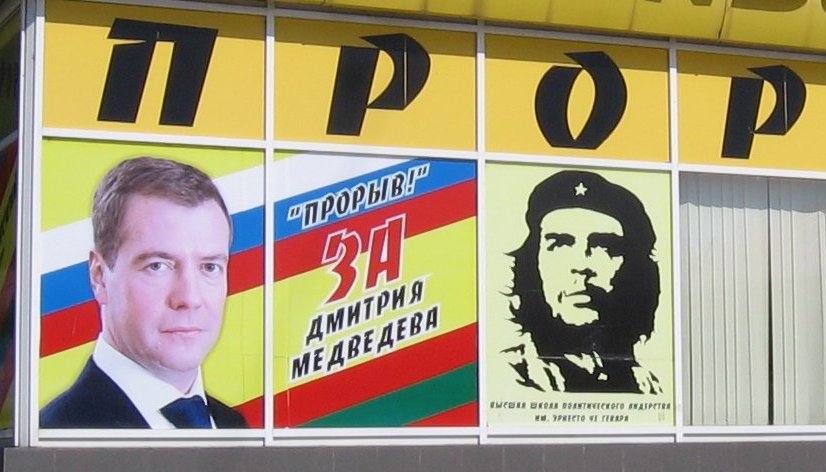 Alena Arshinova is the leader of "Proriv"("Breakthrough"), a youth organization founded in 2005 in Transnistria, a de facto independent territory that, in Soviet times, belonged to the Moldovan SSR. We met her at the organization's headquarters in downtown Tiraspol. An interview

Proriv was founded in 2005 as a patriotic and pro-Russian youth organization meant to defend Transnistria from the wave of "colour revolutions" that was taking place in the post-Soviet space. It was also formed to support policies that would bring international recognition of Transnistria as an independent country. What has Proriv become today?

We also have our media, a website and a newspaper. This newspaper is very important for our organization because we are now experiencing an informational blockade inside Transnistria. We have our own independent position and, of course, the Transnistrian authorities don't like it. They want to control everything here, but we have our own opinion. We are not allowed to appear on TV any more and our radio programme, Russian Proriv, was shut down by the Ministry of Information. They also made an attempt to shut down our newspaper. The authorities are even trying to kick us out of our headquarters here in the town centre.

What is Proriv's stance regarding Transnistria's relations with its neighbours?

Our organization is pro-Russian. Here in Transnistria we had a referendum in a September 2006 referendum, more than 97 per cent of voters cast their ballots in favour of independence and union with Russia and most of our citizens voted for union with Russia. We have common roots with Russia and our youth also try to be educated in Moscow, St. Petersburg, and other Russian cities. But, of course, personally I have friends in many others places, like Bucharest, Chişinău, Kiev...

Our government sometimes doesn't like us because we want Moldova and Transnistria to hold negotiations and we want the European Union and the Russian Federation to come to a compromise on this issue and other similar issues.

What do you think about the unresolved situation between Transnistria and the government in Chişinău?

Of course, we want to have a settlement. At different round tables or conferences people sometimes say that Transnistria is an autonomous province within Moldova. I laugh at these declarations because, as one can see, it is not autonomous, it is a separate state. People should not lie to themselves. This is a separate state.

Our independence is not recognised, and people are fed up with it. It is very difficult to live in a state where local authorities misuse their power.

Now we are in a difficult situation not only because we are not recognised, but also because of domestic struggles inside Transnistria such as the struggle between the executive and legislative branches and between the President and the Parliament. I don't think that this is good for our very small and unrecognised country.

These people are trying to divide our society. During all the years that followed the fall of the Soviet Union, we acted as one. Everybody wanted to have a strong community, to fight for independence. We were inspired. Now, we have a lot of different positions. Some people support the President, some the Parliament, some neither one nor the other, like me. But I don't think it is the right time to have internal conflict.

Do you have concrete proposals for reforms?

We want a proportional electoral system with a prime minister and a government. I fear we won't have it soon, but we want people to discuss it.

And we don't like certain attitudes of the state administration like, for example, when they try to ban our meetings. Once we had to appeal their decision in court and we won. Nobody thought that we could win, but we did.

We are pro-Russian, but we don't want to follow the government line on what is good and what is not. We try to think with our own heads.

What about the NGO sector in Transnistria. How has it developed in the last few years?

There have been different phases. People here are very talented and active. The NGO sector is very interesting, but its development is tied to the internal political situation. Now is a very good time, but four years ago was not. We have more than two-thousand NGOs here.

But, realistically, how many of them are active?

Realistically, we have about ten active NGOs, maybe more. Let's say twenty. Sometimes we work with them. To tell the truth, we are are more engaged in social and political projects like round tables, conferences, and the like. Perhaps it could be important to take a common position on different things like, first of all, the Moldova-Transnistria conflict.

Is it possible to support the peace process from the grass-roots level? Do you think it is possible and useful to have a dialogue with other organizations based in Chişinău?

If you asked me, I could easily tell you who is who in Moldovan politics. Everybody here knows. In contrast, nobody knows about Transnistrian politicians in Chişinău. I feel it is very important, even necessary, for us to explain what is happening here to them and to make them understand why we are here, why we have such positions, why we don't want to be part of Moldova.

Proriv defines itself as a patriotic organization. What does motherland mean for you?

I can tell you that I have lived all my life - my conscious life - here in Transnistria and that this is my motherland, but Russia is also my motherland and I consider myself a citizen of the world.

I was born in Germany. I have relatives in Siberia and my father is a Russian military officer. He moved here. I have Belorussian, Polish, Turkish, Italian, American, Russian, Ukrainian ancestry in my blood, and maybe others. This is why I think of myself as a citizen of the world. We are sitting here together. We are from different countries and we can talk to to each other easily. We can have very warm relations.

But I know that this is our motherland. We are living here and we want our people to live better. They deserve it, we deserve it, and we will do everything to make life better for all of us staying here.