The Switzerland of the Balkans 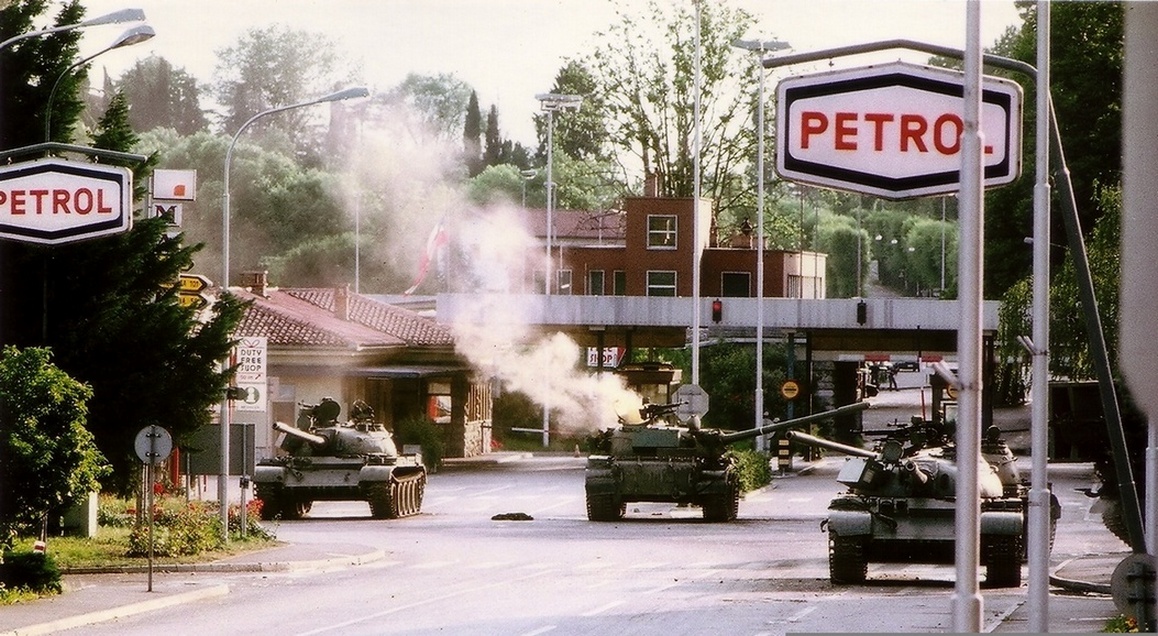 Clashes between the Yugoslav Federal Army and Slovenian Territorial Defense at the border crossing of the "Red House", near Gorizia, following Slovenia's declaration of independence - photo by Peter Bozic - CC BY 3.0, Wikimedia

Thirty years ago Slovenia proclaimed its independence. Now the pendulum that carried Ljubljana towards the West seems to be swinging backwards fast, and the models are no longer Paris or Berlin but rather Budapest and Warsaw, with their illiberal democracies

It was the announced end of a long process. On June 25, 1991, the Slovenian parliament approved the last acts necessary to proclaim independence. The solemn ceremony was scheduled for the following day, when the Slovenian flag with the red star would be lowered from Republic Square and the one with the Tricorne coat of arms would be hoisted in its place. The Slovenian police forces were preparing to take control of the border crossings and to guard the new border with Croatia.

Without waiting for the celebration, the Yugoslav People's Army began to move into southern Slovenia, but the authorities in Ljubljana preferred to ignore it, to avoid the party being ruined. In the same square where 11 years earlier the Slovenes, with eyes full of tears, took leave of Marshal Tito, swearing allegiance to his Yugoslavia; now with joy and concern for what might soon happen, they were abandoning the boiling Balkan cauldron. Over their heads the Migs of the Yugoslav army passed at low altitude, while the president of the republic, Milan Kucan, delivered a heartfelt speech that ended with what seemed a disturbing omen: “Today dreams are allowed. Tomorrow is another day". The clashes began shortly after, but never turned into open warfare. Pointing the barrel of their guns at each other there were men who knew each other very well and knew which phone number to call to talk to whoever was on the other side of the fence. Despite the threatening tones of the contenders, those on the field did everything to avoid escalating the conflict. It was lucky for everyone. The issue was resolved after 10 days with a ceasefire and then, in the following months, with the withdrawal of the Yugoslav troops. Slovenia had been left to its fate, not least because soldiers and tanks could be more useful elsewhere, for the construction of the "Serboslavia" that Belgrade and its generals had in mind.

Ljubljana had made its dream come true. For decades, the republic had begun to look towards Central Europe and the West. In the eighties, civil rights, individual freedoms and democracy had gained space more and more insistently and now the country was reaching the goal. The idea was to join the European Union and even NATO in a very short time, with the aim of anchoring as firmly as possible to what was rhetorically called the "free world". In Brussels there was no lack of enthusiasm for those diligent pupils, who presented themselves as the top of the class, so much so that Europe preferred not to see the blatant violation of human rights that led to cancelling 26,000 persons from the list of residents. These were men, women, and children from other former Yugoslav republics who had not applied for Slovenian citizenship. A clean administrative act, nothing like the atrocities that took place in the rest of the Balkans, but no less cruel for those who suffered it. People thrown into a kind of Kafkaesque castle, forced to fight to re-emerge with an insensitive bureaucratic machine. Slovenia pretended not to see the problem, and when forced to fix it, the official version was that the "cancelled" had it coming, as they had not been able to seize the opportunity to become Slovenian citizens.

It was one of the few blemishes in the independence process; otherwise, things went well. The exit from Yugoslavia had been almost painless, the standard of living had progressively increased, the country had been spared from savage privatisations, the gap between rich and poor remained somewhat tight, and the state administration proved to be able to function in a efficient way. Ljubljana quickly joined NATO, the European Union, and acquired the Euro. In short, Slovenia's seemed like a “success story”.

The dream began to crack as soon as the goals were achieved. What at the time of Tito was considered the Switzerland of the Balkans probably began to realize that it was nothing more than the umpteenth insignificant periphery of Europe, which no longer excelled in anything. There were no longer any major goals to reach and so the riotous political class, no longer needing to find a communion of intent, began to unearth weapons and resume the "civil war" that had characterised it in the past. Meanwhile, Balkan music began to reappear on the radios, while a certain nostalgia began to resurface. The pendulum that had carried Ljubljana towards the west was beginning to swing back, and now it seems to want to accelerate. For Ljubljana, and in particular for the current centre-right government, the model does not seem to be Paris or Berlin, but rather Budapest or Warsaw. Thirty years after the proclamation of independence, Slovenia is rapidly shaking off that left-wing "liberal" tradition that had gradually taken hold since the 1960s. The route is now another and points all towards the east, marching decisively towards the models of illiberal democracy, in a sort of geopolitical game of the goose, where it took thirty years to go west and return to the east.