Croatia Must Not Whitewash the Horrors of Jasenovac 03/09/2018 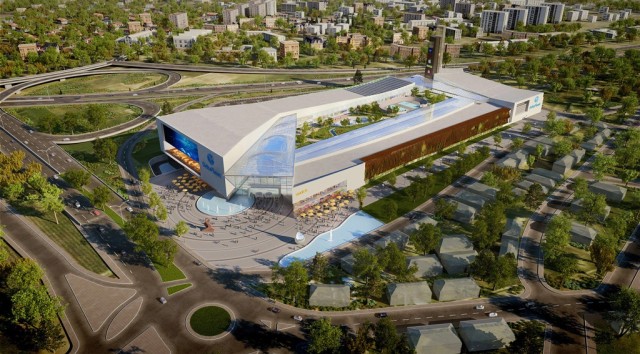 In Belgrade, the building that housed one of the first Nazi concentration camps in Eastern Europe will be razed to the ground. Its place will be taken by a shopping centre. The protests of the citizens

"From August to December of 1942, this place was a Nazi concentration camp for Jews and Roma people from Belgrade and the Banat region. All were declared prisoners, and each day hundreds were transported elsewhere to be shot". The bronze plaque bearing this inscription is located on the wall of a dilapidated building – removed from the view by bushes and billboards – located in the district of Vozdovac, just outside the centre of Belgrade. Known as "Topovske Šupe" (i.e. "the mouths of cannon", as it anciently used to host barracks), the building housed one of the first concentration camps in Eastern Europe during the Nazi occupation.

Within a few months, Topovske Šupe will most likely be razed. The land on which it stands is owned by Serbia's largest private group, Delta Holding, which intends to demolish the ruins of the former concentration camp to build a large shopping centre. As stated in the brochure of the project , the "Delta Planeta" is designed to be the largest shopping mall in the region (with an area of 200,000 square metres) and attract customers not only from Belgrade, but from the whole of Serbia and even other Balkan countries. The total investment is 200 million Euro. Works are due to start next year and are expected to be completed by the end of 2015.

The representatives of Delta Holding have stated that the memory of the place will not be erased and indeed will find a 'dignified place' in the context of the new construction. But in Belgrade, many find this solution outrageous and disrespectful of the historical and cultural value of the place. And so, on June 2nd, about fifty people gathered in Topovske Šupe to express their dissent and revive the memory of that place. And they did it by holding a "Čas istorije", a history lesson. 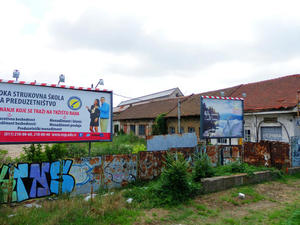 During the Second World War, several provinces of the Kingdom of Yugoslavia – corresponding to the current territory of the Republic of Serbia – were occupied by the Axis powers. Most of the occupied territories were immediately placed under Germany's direct military administration, while some border areas were annexed by the allies of Nazi Germany (the Independent State of Croatia, Hungary, Bulgaria, and Italy).

The persecution of Jews and Roma people by the occupants began as early as 1941, with the massacres of Draginac and Loznica and the construction of the first concentration camps. A few months later, 3,000 people were killed in the massacre of Kragujevac, and as many were the victims of the massacre of the Jews of Vojvodina (then under Hungarian rule) told in the book “The cold days of Novi Sad”. In the first year of occupation, about 16,000 Jews were exterminated, many of them in the infamous concentration camp of Banjica. Occupied Serbia was the second country, after Estonia, for which Berlin declared the "Jewish question" finally resolved in 1942.

The concentration camp of Topovske Šupe started functioning in August 1941, shortly after that of Banjica. Referred to as "the Jewish camp in Belgrade" in German wartime documents, Topovske Šupe operated as a camp for the Jews expelled from the Banat region (north-eastern Serbia) and for Roma people. The exact figures are unknown, but it seems that in the four months of activity, between 4,000 to 5,000 people were detained there, then sent to die in concentration camps in the Belgrade area (Kumodraž, Bežanija, Jajince, and Sajmište). 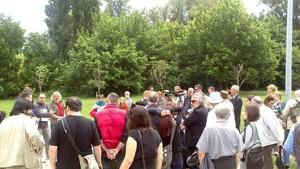 In a lengthy interview published on e-novine , Jovan Byford, a scholar who studies the Holocaust in Serbia, retraces the steps of the difficult process of memorialisation of Topovske Šupe. The first attempt, says Byford, dates back to the late '70s, when the project of converting the building into a bus station was met by the request to erect a monument to the victims of the concentration camps. Neither, however, were ever built. The first commemorative plaque, continues Byford, was affixed only fifteen years later, in 1994, but in the wrong place. This glaring oversight unleashed the indignant reaction of the Jewish community, but with no effect.

The commemorative plaque mentioned at the beginning of the article was placed (in the right spot, this time) only on January 27th, 2006, when Topovske Šupe, on the occasion of the International Day of Holocaust Remembrance, was proclaimed "park of Memory" in the presence of Prime Minister Koštunica. Nevertheless, adds Byford, the former concentration camp was never officially declared cultural heritage. In fact, before the plaque was affixed, the land had already been bought by Delta Holding, and the plan of construction of the mall had already been defined.

The recent protests have begun when the media brought to public attention the plans for the future shopping centre, highlighting the absence of a project to safeguard the historical memory of the former concentration camp. Delta Holding, however, denies the accusation of negligence. In an official statement, the company states that its commitment to the memory of Topovske Šupe is adequately preserved, and dismisses allegations as a cowardly attempt to throw mud on the company and in particular on its president, entrepreneur Miroslav Mišković. Such a nervous reaction is not surprising, since Mišković, the richest man in Serbia, has for months been at the centre of an investigation by the judiciary for alleged fraud related to the privatization of some construction companies.

A lesson of history and civilization

On June 2nd, the 'history lesson' of Topovske Šupe was attended by researchers, activists, representatives of Serbia's Jewish community, and even some relatives of the victims of the concentration camps, whose touching testimonies made the commemoration even more intense. At the end of the event, participants prepared a summary of the lesson to be sent to all members of the City Council of Belgrade and the institutions responsible for the memorialisation of places of historical and cultural interest.

The meaning of the event, in the words of Nebojsa Milikić, one of the organizers, was to remind citizens and authorities that it is unacceptable for a place where thousands of people were held prisoners and sent away to die to become a shopping centre, i.e. a space for consumption and fun. This opinion is shared by Aleksandar Nećak, representative of the Council of Jewish municipalities, who notes that "the idea of a place of suffering transformed into a shopping mall is not in itself anti-Semitic, but anti-civic, profoundly anti-civic".

The difficult, controversial process of memorialisation of Topovske Šupe illustrates the complex relationship that Serbian society has with the memory of the Holocaust. Jovan Byford has an interesting theory in this regard. In his view, the issue is not whether or not to erect monuments to the Holocaust. "The problem is another", he says. "In Serbia, the public tends to interpret the Holocaust as a historical event that is significant only for Jews, and not as something that should be a fundamental element of historical memory for the whole society".

"Furthermore", says Byford, "Serbian society is very much characterised by the phenomenon of comparative self-victimisation: the commemoration of the extermination of Jews is often carried out in ways that tend to equate it with the Serbian deaths". As a result, "interpreting the Holocaust as a universal example of human suffering and death at the time of Nazism is often not understood, but on the contrary tends to stir, even today, very harsh reactions".