The suspended time of Belgrade's kafanas 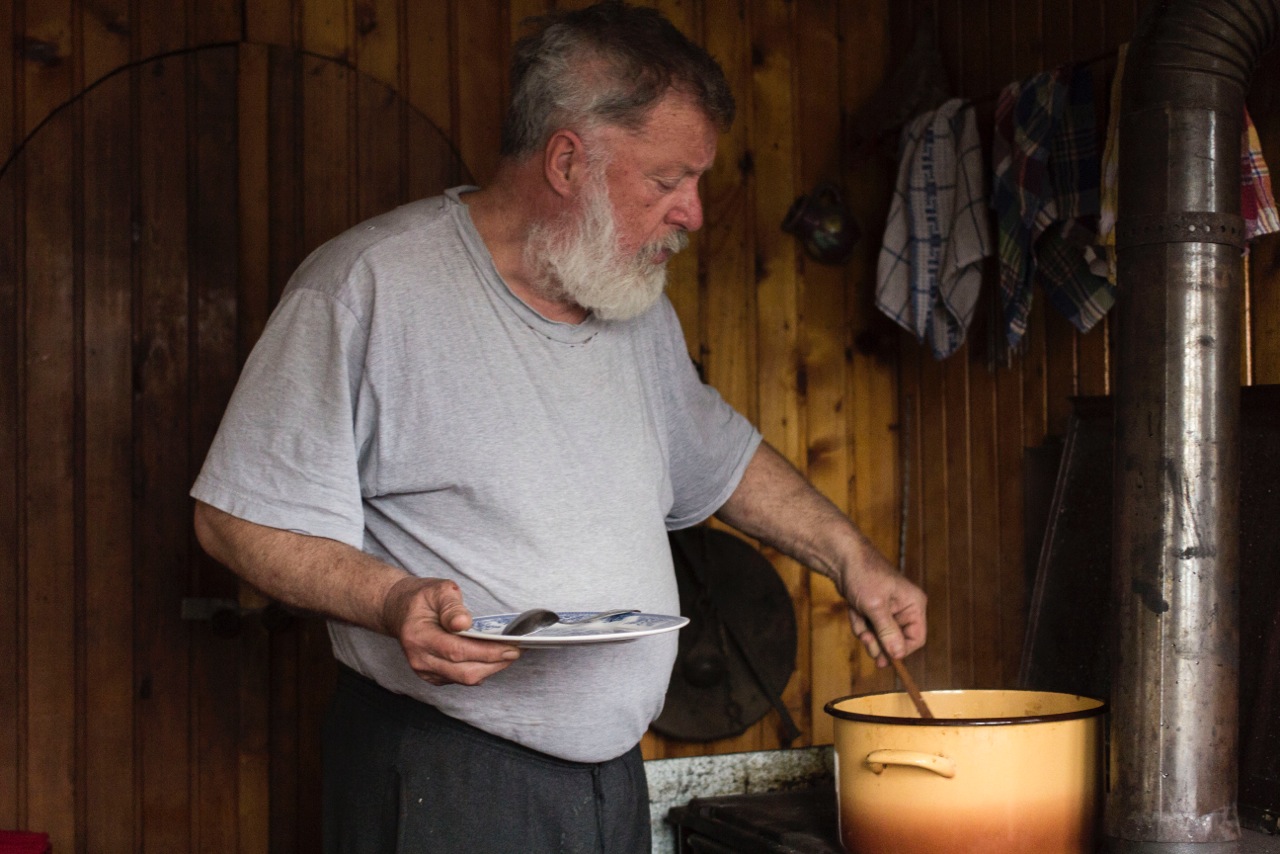 Places suspended in time, far from the bustle of the capital and the high tech kitchens: these are the Belgrade kafana which tell the story of a special soul

“The story goes that Gavrilo Princip planned his attempt on the life of Austrian Archduke Franz Ferdinand precisely here. The decision was probably taken between one game of billiards and another”. Sitting at a table in the Zlatna Moruna (the “Golden Sturgeon”), the Serbian writer Dušan Veličković recalls the event which gave rise to the First World War. With crossed legs and the right hand resting on his thigh, the author of “Serbia Hardcore” lets his gaze roam round the scattered, empty chairs. “In the nineties, with privatization, this place became a betting centre, then a Chinese shop. Now, even if there's nothing to remind you of its past, it has at least returned to its original use”, continues Veličković, wrapped round by his cigarette smoke as if by a scarf. Close by the market of Zeleni Venac and not far from the railway station, this kafana is one of the most famous in the Serbian capital, and at the same time one of the most neglected.

Victims of time, fashion or the free market, which they have to face without a law to protect their prestigious curriculum, the Belgrade kafana change hands, are transformed and often disappear, as happened to the Zlatna Moruna for a short period of its lengthy existence. These timeless meeting places with their kitchens open at all hours and where “the world is put to rights”, sometimes in the true sense of the word, recount an important part of Belgrade life which mixes social customs and constant political ferment.

“What was he then, a hero or a terrorist, Gavrilo Princip?” asks Dušan Veličković with a complacent smile. Without waiting for an answer he continues his line of thought. “With hindsight, I would say he was a terrorist. But he can no longer be judged with the eyes of the time. In any case, he was young, naive and a bit mad, but, above all, manipulated by officers in the Serbian army...” says the writer, well aware he's beginning a typical kafana discussion right here near the street named after Princip. 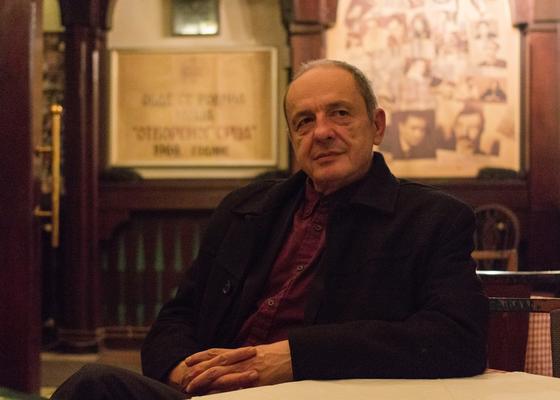 Let's not talk about politics

“Nećemo o politici” is the title of one of Branko Dimitrijević's novels and also one of the phrases most commonly heard in the cafés of Belgrade. “Please, let's not talk about politics!” could be our translation of this providential intervention which saves a game of cards from disintegrating into an ideological brawl.

An expert of these smoky places and the slippery conversations that germinate there, Dimitrijević has set almost all his books inside Belgrade kafanas. “They are hybrid places with Austrian and Turkish elements. Like the city itself”, explains this writer who emigrated to the USA in 1985 and only came back to his homeland in the early 2000s. “You drink coffee, not tea, you can read the newspaper, eat goulasch, beans or grilled meat such as sausages or burgers. You can smoke inside and the table cloths are usually like this one in small red and white squares”, he says, passing his hand over the table in Srpska Kafana in Svetogorska street.

“Another constant of these places is the generally poor service”, he delivers in a low voice bending over to avoid the ears of the waiter, impeccable in his white shirt and sullen attitude. “In the time of Yugoslavia we were all employees and those who worked in the kafana didn't care if they sold or not. So you could wait even an hour before anyone came to take your order and be asked bluntly, 'What do you want?'” Dimitrijević remembers amused.

Today, even if competition has imposed a minimum of attention for the customer, efficiency is not yet the rule, that is – maybe fortunately – it has not attained the level of more modern restaurants where tablets have taken the place of notebooks and communications with the kitchen come about on the invisible waves of a wireless internet. “For me the main innovation is cool beer. Once the fridges were small and all too often the beer had to be drunk warm”, Dimitrijević remarks, making himself comfortable on his chair before specifying which time he was referring to.

“The golden age of the Belgrade kafana occurred between the end of the sixties and the early eighties. Belgrade was the capital of Yugoslavia, a great multi-ethnic state and in places like these you could meet people who had arrived from all over. These were the individuals who, with their accents, their jokes and their discussions, created a unique atmosphere”, the writer recounts, looking through the window at the town and drinking his now cold coffee.

This author of “Oktoberfest” (from which Dragan Kresoja's film of the same name was taken) emigrated just in time not to see the collapse, the speeches of hatred and the wars and recalls a period corresponding to his youth, a period about which nostalgia has been blossoming in recent years. “The kafana were everywhre”, from Kalemegdan to the southern parts of Belgrade. The old centre alone could count the Kolarac, Znak Pitanja, Brankovina, Majestic, Proleće and Ruski Car (which became the Zagreb, now closed). Crossing the Square of the Republic and dropping down to the Sava and Danube the list continued, making up over fifty. 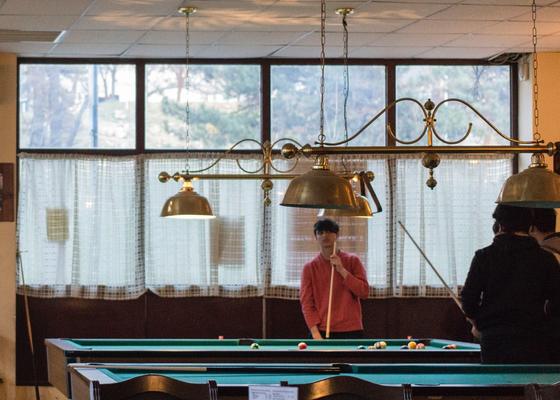 Their concentration was particularly high near the offices of the newspapers, radio and television. Three of them, dotted around in front of the building of the well-known daily Politika made up what was called the Bermuda Triangle: the Pod Lipom, Grmeč and the Šumatovac, of which only the last remains, having become, however, an elegant restaurant. “It was called that because of the number of people who got lost between one glass and another, and disappeared for days”, Branko Dimitrijević goes on, remembering how journalists of the national TV had baptised two more cafés as “Studio 3” and “Office of Production”. “If you were looking for someone and they told you he was in the 'office of production' you knew you had to go out in the street and into the Lasta”, a small buffet which has recently reopened near the church of San Marco. The writer bursts out laughing, but then falls silent. Before him now the multiethnic Yugoslavia no longer exists, Politika is having trouble trying to restore its reputation damaged in Milošević's years and the kafana where we are sitting is half empty. Is it all lost?

Dimitrijević hesitates. On the one hand, these cafés, having gone through the fever of nationalism and the years of wild capitalism, don't seem the same as they did before. “The Slovenians, Bosnians, Croatians, Macedonians are all missing”, he explains. On the other hand, he admits he finds it difficult to separate his memory of the kafana from the story of his own youth. That yes, lost definitively.

To find an answer then we have to leave the Srpska Kafana, walk up Svetogorska, pass the now inoffensive Bermuda Triangle, to reach the Mornar (“The Sailor”), situated by some joke of destiny opposite the Dom Omladine, the Youth Centre of Belgrade. Inside, among the sea-blue tables and ashtrays smoking like little ships, groups of young people put the world to rights just as they did fifty years ago, even if mobile phones pop out every so often between the glasses. They choose the Mornar because it's cheap and comfortable, but also because it has that discreet, shabby charm which our author remembered with regret.

“It's my favourite place, because you have to wait ages for a waiter to come and serve you and it's that slow atmosphere which makes it special”, explains Natalija Ostojić who is sitting in front of a pint of beer and a diary full of notes in different colours.

Since the Hotel Royal (famous for its restaurant open 24/24) closed for renovations, this young Belgrade architect hangs out at the Mornar. What she unwittingly describes is an atmosphere of the “golden age of the kafana”. “You don't come here for a quick chat or a coffee on the run, but to stay till it closes, exchanging smiles, words and živeli (toasts) with new acquaintances”, she says, assuring us that “no-one makes small talk in the kafana” but they share “their opinions, thoughts, fears and wishes”. All told, around these strictly square tables - “never round because the four sides represent four different points of view”, Natalija points out – the spirit of these places continues to hover, in part thanks to a generation which has made peace with the “old”, or “vintage” as they would say today.

The kafana on the island

Having avoided the stumbling block of nostalgia, and our sails filled with the renewed energy of the Belgrade youth, this story may now head towards its conclusion – which will require an actual boat. After the Mornar, on the road leading to the River Sava, we were to meet Milan Simić, a 33 year old artist who has made the rivers of Belgrade his working space, designing the boats and barges that ply along the sides of Kalemegdan. Milan's favourite kafana is to be found neither in the old centre nor in the modern part of the town, but on the Ada Medica, the little island near its bigger sister Ada Ciganlija, and can only be reached by a small ferry. On the southern bank of the island at the water's edge, among the seemingly neglected shacks and trees with their drooping branches, the “true kafana”, as the young painter describes it, is the den of Adem Rizainović who came from Banja Luka to Belgrade at the end of the sixties. An informal spot which seems suspended in time, but which in summer can accommodate dozens of people round the tables on the river bank.

Inside the atmosphere is far away from the Zlatna Moruna with its billiards and din of the town. A meat stew is cooking on the wood-burning stove while the stereo plays Bosnian sevdalinkas and the songs of Rade Šerbedžija that Adem wants to listen to. “Be quiet a minute!” he says to his friend Nikola who is trying to tell him how to make rakija from apples, and a contemplative silence takes over from their conversation.

“This is the life”, smiles Milan, playing with his glass. Meanwhile books, photograph albums and records arrive on the table and we talk about literature and gastronomy. Politics only rears its head when Nikola, who was born in the capital, assures us that “in Belgrade we have never asked: where are you from?” “Until Šešelj arrived”, Adem corrects him. “Don't ask me what I think about it” mutters Milan “you'd believe me to be a nationalist”. The topic is dropped and Nikola takes up the thread: “With ten kilos of apples you make a litre of jabukovača (rakija made out of apples)”. From fruit bought in Hungary, we then pass to anecdotes on Vojvodina and slowly drift away.

As the sun goes down, the kafana slides into a kind of melancholy in which the checked table cloth (which has accumulated a few empty bottles) is transformed into a stage set of memories. Stranded, without ever having moved from there, we don't leave till after dusk when Adem ploughs through the waters of the Sava in the dark to take us back to dry land.