Nationalism and revisionism in Croatia: teenagers tools and victims 28/02/2019 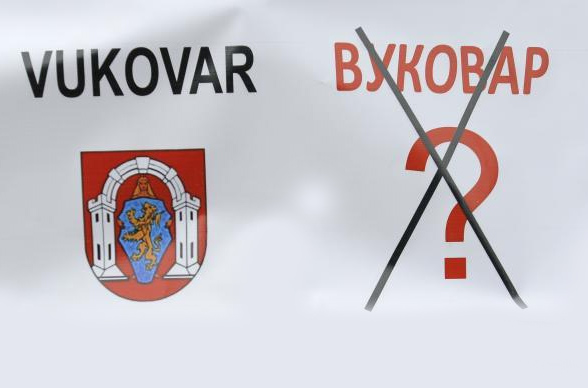 A poster shown during the protest in Vukovar

The law introducing double signs in Latin and Cyrillic on the streets of Vukovar has triggered strong protests. But how much is the city really divided?

On 2 February, in Vukovar, in a warlike atmosphere reminiscent of the early nineties, twenty thousand people, many of whom arriving from other parts of Croatia, shouted "no" to Cyrillic.

This happened in response to the Croatian government's announcement that, in agreement with the results of the census and the commitments required by the Constitution on the rights of minorities, bilingual signs would be introduced in the city.

Indeed, according to the law, the State is obliged to introduce bilingual signs in those places where national minorities make up more than a third of the local population.

The Constitutional Law on the Rights of National Minorities was adopted back in 2002, when only five deputies voted against.

It was a rare case of unanimity among politicians on such a sensitive issue, and one that was necessary for Croatia in 2003 to be able to submit an application to join the European Union.

The protests in Vukovar

A few weeks before the protest, Minister of Public Administration Arsen Bauk announced the introduction of Cyrillic in Vukovar.

Replying to nationalists' threats that Cyrillic signs would be taken away by force, the Minister said that the State had no plans to introduce bilingual signs in secret, but lawfully and openly.

He did not have to wait long for an answer.

The Committee for the defence of Vukovar, formed in mid-January by veterans, former prisoners, and war invalids, announced a mass protest against the introduction of Cyrillic.

They asked the government to suspend the law and declare a 50-years moratorium for the introduction of Cyrillic, explaining that the wounds of war are still open, that Vukovar is still looking for 400 people who disappeared during the war, and that the perpetrators of war crimes against Vukovar's Croats have yet to be punished.

Although the Cyrillic alphabet has little to do with the missing, the dead, and war crimes, and even less with the causes and consequences of war, it is perceived by protesters as a danger to Croatian identity and an insult to war victims.

Therefore, 15 years after the peaceful reintegration of the Croatian Danube Region (Podunavlja), when the UN peacekeeping forces put this region under the Republic of Croatia, inflamed tempers are seriously shaking the fragile coexistence built, with great difficulty, by Serbs and Croats.

A fragile coexistence at risk

In fact, accidents of nationalist background in Vukovar have been rare in these 15 years, no more frequent than in other parts of Croatia that were barely touched or completely spared by the war.

The narrative of “Vukovar divided city”, mainly enforced by the Croatian Democratic Union (HDZ) and the Serbian Independent Democratic Party (SDSS), has served as a homogenizing factor in order to protect the respective interests of Croats and Serbs.

Primary and secondary schools in Vukovar are divided inasmuch as there are sections in which students learn either the Croatian program in the Latin alphabet or the program reserved to the Serbian minority in Cyrillic. There are divided kindergartens. There is a Croatian Radio (Vukovar) and a Serbian Radio (Dunav). There are also bars mostly attended by Serbs or Croats.

Over 15 years, however, sharp divisions have slowly faded and the dividing cement rose after the end of the rehabilitation and the return of Croats in Vukovar has become increasingly transparent and porous, less and less visible.

Željko Kovačević is the head of the Nikola Andrić primary school, housing under the same roof 266 students, half of whom studying according to the "model A", i.e. in the Serbian language and Cyrillic alphabet.

He states that the existence of separate programs has created the perception that children of different backgrounds are rigidly separated and do not socialize, but that the opposite is true – children of Croatian and Serbian nationality socialize during breaks, have lunch together, sing together in the school choir and compete against their peers from other schools in a single team.

Another interesting story of Vukovar's everyday life is told by Branislav Bijelić, director of Radio Dunav, where journalists speak ekavo and the most popular music is Serbian turbo-folk. It is not rare to hear the Croatian audience dedicate to loved ones songs by Ceca Ražnatović-Veličković, wife of Željko Ražnatović Arkan, sentenced by the International Criminal Court in The Hague for war crimes against Croats (not convicted because killed during a mob showdown in Belgrade in 2000).

So, it would seem, turbo-folk is all-right, but Cyrillic is not?

Now that the elections are coming up on May 19th, the Cyrillic question is used to grab a slice of the electoral pie.

The Vukovar gathering would not have been as large if right-wing parties had not pushed the question and sent bus-loads of people. In fact, the most vociferous against Cyrillic in Vukovar were the ones who live far away.

A similar thing happened when the football club "Vukovar 1991" played in the first league and Vukovar was invaded by Hajduk and Dinamo supporters, chests swelling with patriotism, who demolished and destroyed, raised the tension level and inflamed minds, and then left, leaving it up to the inhabitants of Vukovar to sweep up the debris of broken coexistence.