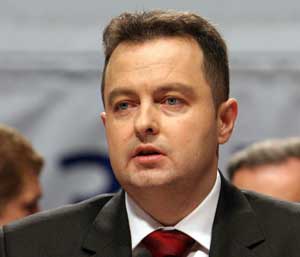 A party in which everything (and nothing) has changed. It is the Socialist Party of Serbia (SPS), today the pillar of a pro-European government, yesterday Milošević’s political creature. At its helm is Ivica Dačić, the man who succeeded in bringing the socialists back to the center of the Serbian political system without explicitly disowning the legacy of the 90s

“I would like for the new Socialist Party of Serbia (SPS) to be able to address the Serbia of 2010 and 2020 with a new project, to stand up to new challenges, those that did not exist in the 90s. If in 20 years time the SPS is still the same, then it will mean we will have worked for nothing”. This is what Ivica Dačić, President of SPS, claimed the day after the latest parliamentary elections in 2008, which re-launched the socialists in the political orbit.

What characterizes today’s Socialist Party of Serbia can be briefly stated as follows: a pro-European course, indissoluble relations with “Mother Russia”, a “historical reconciliation” with the Democratic Party (DS), the endless game on a razor edge with the legacy of the 90s, old and new political parties with a completely new rhetoric, a center-left political identity, being Boris Tadić’s faithful and stable partner, the absence of any ideology.

If it were not Serbia, all this would be impossible. Only around here can such schizophrenia hold: the SPS is fighting with all its might, on the one hand, to join the European Union and, on the other, it is doing its best to bring the country closer to Russia again. Only in Serbia is it possible for the protégé of the regime - then led by Slobodan Milošević - and today the Minister for Foreign Affairs, Ivica Dačić, to be declared the “champion of the European process” because of his achievements in meeting the requisites necessary for the abolition of visas for Serbian citizens.

So it seems to us, maybe, but only in this country can the top officials of the party visit Slobodan Milošević’s grave in Požarevac on the day of his death, while Dačić remained home. That is what they agreed. Or so it seems. Taking a distance from the legacy of Milošević was necessary to establish good relations with the democrats and to convince the new voters, and those who forget easily, that what we are looking at is a new SPS.

All this was done by Dačić and his closest collaborators, those with whom, in the past years, he began climbing the ladder to the top of the party. The same collaborators that in 1996, had stifled the college student demonstrations, pointing the finger at and casting aside the colleagues on strike because of the electoral frauds.

These were the same people who, in 1999, kept claiming that Otpor was a fascist organization and incited to arrest its members. Even though they look more modern, it is the same people who, after the changes in 2000, stated with conviction that it was them who saved the Otpor activists from prison. Today, former Otpors and the renewed socialists sit together at the benches of Parliament and laugh heartily when some boring reporter asks them if they still remember the 90s.

It is said that there are still “hardliners” inside the SPS. Those who visit Milošević’s grave and do not easily detach from his legacy. In their offices, even if only on a corner, they still have the picture of the great chief. They are attractive for the old socialist voters. They oppose to Dačić, trying to bring balance to the party and put an end to the new leader’s ambition to take complete control. The name of the Minister for Education, Obradović, is the one that is most often heard as representative of this strict side. There are other names as well, but they are less frequent, because they are usually of men at the end of their careers.

Between two fires, like a blue beret, is the funniest of Serbian ministers, Milutin Mrkonjić: he is still where he used to be before the changes in October [translator’s note: 5 October 2000, date of Milošević’s fall]. Mrkonjić was at the lead of the country’s reconstruction during and after the bombings over Serbia: he rebuilt the bridges promising the country would be re-born in 3 months. Ironically, today he is the Minister for Infrastructure and is still rebuilding the country, bridges and roundabouts included.

Irony aside, the SPS is a party with a future in Serbian parliamentarianism. Not even the dramatic defeat in 2000, not even all the scandals, the arrest and then the death of the party’s leader were able to bring the socialists below the election threshold to get into Parliament. Almost 6 years after the changes in Serbia, the SPS was groping in the dark, barely surviving, losing pieces and trying to find a way to return to the political scene. This was all Dačić needed to gain leadership. At that time, it was necessary to gather all opposed sides under the same roof and get rid of the most passionate nostalgic people, such as Milorad Vučelić, who wanted to stay the course of Slobodan Milošević at all costs.

The SPS conventions held until 2006, when Milošević was formally still the President of the Serbian socialists and performed his duties even from the Scheveningen prison, are the best indicators of the party’s internal split. "Slobo" was the top candidate on the list during the snap elections of 2003: the leader of the party at the time, in embracing his voters’ desire, he had come to the conclusion that it was possible to exceed the election threshold only with the help of Milošević’s followers. At the end of 2005, during the party convention, when the 15th year of the SPS was celebrated, any reference to Milošević would lead to an immediate ovation from the audience.

Only after his death in 2006, did Ivica Dačić start to seriously take control of the party. Right then is when the present Socialist party of Serbia takes shape: pragmatic and with no particular ideology, ready to collaborate with everyone, not weighed down by the past, unless this turns out to come in handy one day. Oriented towards Europe with a glance to Russia, it is a party that, like the G17 plus, rarely mentions Kosovo. A populist party whose objective is the educated middle class, whose politicians are well-mannered and do not use the language of hatred and whose leader always has to look behind his back for possible attacks. A “social democratic” party, “oriented towards socialism”, as its members defined it with the declaration drawn up at the 6th SPS Convention in 2003. A party where everything (and nothing) has really changed.

This is the Socialist Party of Serbia today. Gentle and refined, a member of the government’s coalition. To some (fewer and fewer) it still gives stomach cramps. Forgetting or accepting reality, we do not have any alternatives. Maybe, however, this is also part of a normal political process. Maybe the only thing left to the Serbian citizens to trust their politicians, to be able to believe they can change, is to convince themselves that times have changed and that Serbia has made such a huge step towards democracy that the 90s cannot come back. With or without the Socialist Party of Serbia.