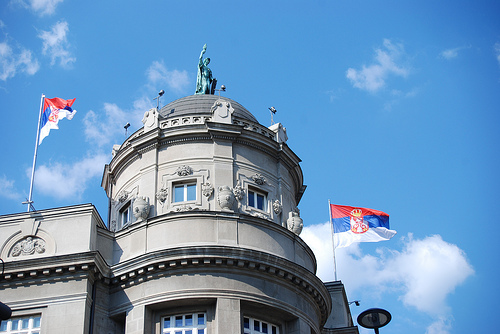 Mladić's arrest opens a new page for Serbia and for the whole region. On the XXth anniversary since the start of the dissolution of Yugoslavia, a sign that the ex-socialist country's long transition has come to an end. After thousands of victims. Our comment

Serbia turns a page. With the arrest of Ratko Mladić, president Tadić has shown leadership of a normal country. A country in which civil authorities have control over the military and the secret services. There will be harsh reactions, nostalgic parades, protests. But they will not change the historical significance of this day. The long transition begun in '89, the end of a socialist system gone criminal, the assertion of new rules of the game, become a matter of fact as from today. In the midst of this, 10 years of war, dozens of thousands of victims, millions of refugees. 10 years of bereavements for which old Serbia bears heavy responsibility.

Nobody was questioning Tadić and his Party's honesty in leaving the past behind, and his commitment to the path towards Europe. The President faced a number of difficult tests. Kosovo, for example. He kept a balance between a position of total rejection of secession but, at the same time, insisted on dialogue and attending the negotiating table. He made significant efforts towards reconciliation at the regional level, taking part in the remembrance ceremonies of 11th July in Srebrenica and meeting the Croat President Josipović in Vukovar. Recently, he reaffirmed his support of territorial integrity of Bosnia Herzegovina during the severe crisis of the “sick man of Dayton”. But all this was not enough. Mladić was missing. The proof was missing to testify to the defeat of the "deep Serbian State", the one led by the military, the secret services and the mafia, responsible for years of sorrow in the region and finally, in Serbia, for the murder of Zoran Đinđić and the end of that short spring of democracy.

Handing in a General is not an easy choice for any government. Generals are the symbol of a sovereignty that no State would like to surrender, they guard the deepest secrets of the apparatus. During the war in Bosnia, Mladić was a regular guest at the meetings of the Supreme Serbian Defence Council, in Belgrade. For the military, Mladić was not Karadžić. He was one of them. This is also why they protected him. In these 15 years on the run, the General had many friends. Foreigners too. In the first years after the end of the war, in Bosnia there were thousands of SFOR troops. Why didn't they catch him? Because of the fear of the the Bosnian Serbs' possible reaction, or cause of the complicity surrounding him? In Serbia, until Milošević's downfall, he lived freely. He could even go to the stadium to watch a football match. After 2000, however, things started to change. The General remained in the barracks (Topčider, in Dedinje) and went out more discretely. Between 2003 and 2006 it is believed he lived in Novi Beograd. The big change came in May 2007, with the arrest of Zdravko Tolimir, ex head of security of the Bosnian Serb army, Mladić's “colleague” in Srebrenica in July '95 and held to be responsible for the abscondant's protection network. Since then things started to get worse for Mladić. First Tadić's victory (May 2008), then Karadžić's arrest, two months later. Nevertheless, his protection system continued to work. The “deep State” endured. It was like Damocles' sword, not only attached to Serbia, ma to the whole region. If Tadić wanted to hand him in, why didn't he do it? The doubt was that he was too weak to face the apparatus, that the “deep State” was still too dangerous.

Today the President has decided to take that risk. A new Spring has begun, not only for Serbia, but for the whole region. Let's hope it will not be a short one.