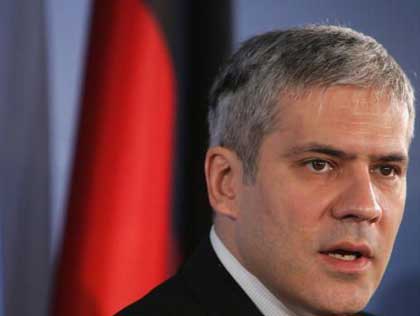 After the May election and the forming of the new government, thanks to the coalition between the Democratic Party (DS) and the Socialists (SPS), there have been great changes in Serbian politics. The biggest change concerns the political reconciliation of once antagonistic parties

The news of the forming of the new Serbian government is already out-of-date. Major interests now involve the actual capacity of the new government, and there are those who, from old habit, already speculate on its possible duration.

Nevertheless, the Serbian political scene is witnessing major, some would even say, tectonic changes.

In the last days, many observers note the so-called "political reconciliation" - first mentioned by Boris Tadic - of the, until recently, diametrically opposed parties, Tadic's DS, and the SPS, which was the symbol of evil from the times of Slobodan Milosevic.

DS and SPS presidents Boris Tadic and Ivica Dacic announced they would sign a declaration of political reconciliation between their two parties. "This declaration aims to assert our commitment to work together for the future of the people and the country. The entire Serbian people need to reconcile. All the antagonisms need to be overcome and the energy which over the past decade had been wasted on dividing the people and the country should now be directed towards our strategic goals," Tadic said as reported by the daily newspaper Politika.

Boris Tadic who was, until yesterday, described as "Forest Gump", "Barbie", or "model", has today become "a statesman", "man of vision", and "strategist". From "Boris the Weak" to "Serbian Putin", says political analyst Djordje Vukadinovic, known for his dislike of Tadic and his policies.

Did Boris Tadic become a great leader or perhaps there is a small autocrat "residing" inside him? The descriptions of Tadic as a "weak" politician who lacks authority emerge from his patient and conciliatory behaviour and his policy of compromise and "let it be". Yet, according to some, over the last month Boris has started to raise his voice. His behaviour during the meeting of the central committee of the DS was particularly striking. Tadic practically ordered the tightening of the coalition with SPS on all fronts and he said that those who would not do it would have to "deal with him".

Tadic succeeded in what neither Micunovic (one of the founders of DS) nor Djindjic had even thought of. The Democratic Party has become strong, with a well defined internal structure and strengthened capacity of its local committees. The party does not only win elections because of Belgrade but has the support of a "base" throughout the country. Tadic defeated for two consecutive times his opponents for the presidency, but also, for the first time, he defeated the Radicals. In some areas, he has practically "wiped them out"; for example, in Vojvodina, for the first time in years, he ensured the DS the lead before the Serbian Radical Party (SRS).

These are the evident and measurable achievements of Tadic and his policy of "step-by-step". However, some more words would be useful to describe the other possible effects of this policy. The idea of political reconciliation should be assessed from the perspective of achieving long-term stability in Serbia, which Tadic declares as his major priority. A Serbian society divided into two Serbias creates many obstacles to development. The entry of the SPS into the group of so-called democratic parties is the first step towards that desired stability. The next step could be the attempt to also have the SRS undergo a similar transformation. This is how Tadic's words about the need of not only political, but national, reconciliation should be understood.

However, Tadic also had some issues to resolve. First, he had to control the excitement inside his party after attaining their best electoral result. He had to "satisfy" everybody's appetite. He had to distribute ministerial seats in a way acceptable to everyone. He had to habituate the members of DS, the party officials, and the voters to the idea of a coalition with SPS; to explain the idea of political reconciliation, and he had to decide who would be Prime Minister. These were the major challenges.

There is much talk in Serbia of a possible conflict between Tadic's cabinet and the party leadership. The "drama" allegedly took place during a meeting of the party presidency, when Tadic's closest associate Srdjan Saper proposed Foreign Minister Vuk Jeremic for Prime Minister. The majority of the presidency members strongly opposed the proposal. The major criticism of Jeremic was not the fact that he is still very young; but, according to Saper and Tadic's media adviser, Krstic, the fact that he is part of a group that does not have good contact with the party base and is not very committed to internal party work.

During the meeting, presidency members banded against Tadic and proposed Bojan Pajtic, currently the Prime Minister of Vojvodina. According to sources, a long and difficult debate ensued. High DS officials exchanged accusations criticizing Jeremic's nomination. The members of the presidency particularly disliked the fact that despite the arguments and the clear position of the majority, Tadic did not make the decision on the Prime Minister immediately but allowed himself the "luxury" to think some more about it. After having slept on it, Tadic decided not to go against the will of the majority of his party and gave the position to Mirko Cvetkovic, who was well accepted by everyone. This has, at least for the moment, reconciled the two streams inside the party.

The policy of slow and thoughtful decisions relates to Tadic "generously" giving much space to the other parties in the coalition even before the elections, thinking that would allow him to obtain the best possible result at the polls.

Tadic even succeeded in reconciling the irreconcilable, by including in the government both Rasim Ljajic and Sulejman Ugljanin, representatives of two antagonistic parties from the Bosniac region. Also included is a minister from the Movement for Serbian Renewal (SPO); even though the leader of SPO, Vuk Draskovic, might lose his wife over this. His spouse, Dana Draskovic, publicly warned her husband that he would stay alone if he coalesced with SPS, the party which Dana cannot forgive for the two attempted assassinations on Vuk, for the numerous arrests the couple suffered, and for the killing of four persons on the Ibar regional road.

To many it was not even clear what Tadic was doing with the Socialists. Not only had he helped them return to power, but he opened for them doors of which they could only dream: the doors to the international community, to membership in the Socialist International, and to overcoming their reputation related to the past. Tadic had the ace up his sleeve and knew that neither Toma (Nikolic) nor Voja (Kostunica) could make a counter-move.

After eight years, the Socialist Party of Serbia (SPS) is again the centre of attention. Expert opinions suggest that the socialists did not decide to coalesce with the so-called pro-European parties for economic reasons, as claimed by the Radicals who allege payments of a few million euros, nor for the excellent offer of ministerial seats and posts in the administration. The SPS decided to go with DS with long-term goals in mind; that is, to change the image of the party which now has social justice in the centre of its program.

The change inside the SPS did not happen overnight and it was definitely not easy. The old guard led by Milorad Vucelic, ex-director of the Serbian Radio-Television and close associate of Milosevic, and Borka Vucic, sternly opposed the coalition with the DS. The local committees of the party were also not very inclined to cooperate with the DS. Party president Ivica Dacic, however, had started asking support from the DS in the past two years; above all, to strengthen his position at the helm after the death of Milosevic, and to obtain some international legitimacy for the party. Both tasks had been completed successfully: bringing closer the old party leaders and co-opting the young forces.

While Dacic is the winner who now has the chance to change the SPS, the ex-Prime Minister, Vojislav Kostunica, had lost but does not think of retiring. As announced by the Democratic Party of Serbia (DSS), Kostunica for the time being will not be a member of Parliament, but instead he will dedicate himself to work inside the party. Well-informed sources confirm that the DSS is undergoing its worst crisis ever; that members and supporters are quickly leaving, and that the party is losing its identity and position. As a member of the party's political council, Kostunica will seek to stop the declining trend. Allegedly, his coalition partner, the New Serbia party, is unsatisfied with its status, and Velimir Ilic (the New Serbia party leader) is thinking of how to stay in power. Proof can be found in the statement of the new Minister of Infrastructure, Milutin Mrkonjic, who confirmed that Ilic would be his counsellor. Ilic had not commented on this while Prime Minister Cvetkovic stated that each minister is autonomous in deciding on the composition of his/her cabinet.

Finally, the internal dynamics of the Serb Radical Party (SRS) are of interest. Until very recently, this party was homogeneous and completely composed of people with identical ideas, which would rather lose than suffer an internal division. However, everything started to collapse with the departure of Maja Gojkovic - ex-SRS parliament member who left the party when she became the mayor of Novi Sad. Then, after the elections, internal differences started to emerge. It seems that the party leader currently at the Hague (Vojislav Seselj) has turned his back on Tomislav Nikolic and that the communication with the party goes through the hardliners Todorovic and Mircic, who are now Seselj's confidantes. Aleksandar Vucic (candidate for mayor of Belgrade) for the time being has not commented on the SRS internal relations and thus avoids siding either with Nikolic or Seselj.