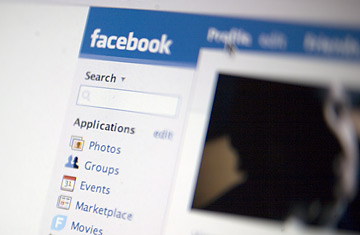 When Facebook caught on to a Serb ultra-nationalists forum called "Noz, zica, Srebrenica", or "Knife, Wire, Srebrenica", using the social networking site to glorify one of the bloodiest massacres in Europe since World War II and promote hatred against Muslims, it was promptly shut down. But on the Internet, where does the hate speech end?

In mid-December, the social networking web site Facebook shut down the group "Noz, zica, Srebrenica," or "Knife, Wire, Srebrenica." The forum, which took its name from a Serb nationalist slogan, glorified the bloodiest massacre in Europe after the end of World War II and promoted hatred against Muslims.

The group rallied support for the former Serb general and war criminal at large Ratko Mladic who, in 1995, led the Serb forces on a killing spree in the Bosnian town of Srebrenica: a genocide which claimed the lives of 8,000 Muslim men and boys. The forum called all those who "believe Muslims are best on a barbeque or swimming in sulfuric acid" to join them. That was its ideological platform: killing of Muslims and praising war criminals.

Reports differed on the number of members the forum managed to acquire before being shut down. According to Reuters, which first broke the story internationally, the forum drew around 1,000 members. Other sources reported a number as high as 8,000 - a number equivalent to the number of victims in Srebrenica.

Within days of the forum's creation, a counter-group quickly emerged in response. The group "Close Group Noz, Zica, Srebrenica" managed to gather around 10,000 members, mostly Bosniak. The counter-forum asked Facebook to shut the group down.

The shut-down was also likely propelled by the interest of the international media such as Reuters and the Financial Times, both of which reported the story.

Facebook's statement on the issue, as reported by media, reads that the site "supports the free flow of information, and groups provide a forum for discussing important issues. However, Facebook will remove any groups which are violent or threatening."

Reactions to the affair echoed internationally and covered the entire left-right spectrum. On one side, some claimed the shut-down was censorship and act against free speech. Others supporting the shut-down pointed out that in some countries, similar types of speech, such as praising Nazism, is a crime. Reactions also varied concerning the potential significance of such behaviour. While some said the incident underlined a fragile peace in the Balkans, others said the forum was the product of nothing more than sad, uneducated teenagers.

If some claimed such adolescent rage is no different than the rage of young people in Greece or the Netherlands, others disagreed by saying that recent history in the Balkans opened the door for a kind of hatred the West is not capable of.

According to Boshko Obradovic, member of the board of the magazine "Dveri srpske," in coverage by Radio Free Europe/ Radio Liberty (RFE/RL):

Yet, in his view "such adolescent behaviour can be found anywhere in Europe". "For example we see it in Greece these days," said Obradovic, "and over the last years we saw it in France, Germany, or the Netherlands. Our teenagers are not more radical or socially aggressive than teenagers across Europe."

In the words of Serbian writer Marko Vidojkovic, quoted by the same RFE/RL report, Balkan extremism can still not be equated with what is going on elsewhere:

"Any form of fascism is completely normal around here because under Milosevic's and Tudjman's leadership we had incitement of hatred so strong that it simply cannot be eliminated that easily. In such a situation, the easiest thing is to hate someone without any reason..."

Nevertheless, Vidojkovic believes that, in the end, the Facebook affair was the work of deluded kids and that an effective model should be found to straighten them out:

"Kids have always been the victims, without any intention to justify any Nazi. Yet these kids need to be understood and brought back to their senses in some normal way. When I was young, I may have been worse than this."

Hate speech or incitement of violence against any ethnicity or religious group is a crime around the Balkans, as in many other countries, but many national legislations have still not caught up with the pace of the web. In reaction to the affair, Serbian prosecution authorities said they did not have any mandate to pursue the issue as the legal framework for prosecuting hate speech on the Internet did not yet exist.

Nevertheless, Serbs are not the only ones talking hatred on Facebook. At the time of writing this text, a couple of groups by the name "Srbe na vrbe," "Serbs on Willows" - slang calling for hanging of Serbs, are still active on the site. One opens with the large slogan "Kill a Serb." The other, which reports its office to be Jasenovac, starts with the ghastly slogan "Imam noz od srebra, zaricu ga Srbinu u jedra" I have a silver knife; I will stab it between a Serb's ribs. The counter-organizations are also there. One is called "Close the group 'Srbe na vrbe'" and it has 5,588 members. There is also a smaller group called "Fuck the group 'Srbe na vrbe'."

Some of the chats and comments on these forums are nothing but blind rage and hatred and they are simply too graphic to convey. And indeed, only to state a fact and not debate its appropriateness, such talk would be a criminal offence if used in conventional media in any country in the Balkans.

Some of the comments have a familiar undercurrent of Serbian victimhood. Facebook shut down the Serb nationalists but not the anti-Serb ones, they complain.

It would likely be a messy affair if Facebook were to monitor all such forums...and potentially open up jobs for thousands of lawyers who could decide where to draw the line. Given national circumstances and sensitivities, what is a crime in one country can be freely said in another.

Obradovic says that the "Internet has opened an enormous space for freedom of speech, but it has not yet offered a solution concerning the responsibility for what is being said." That much is true.