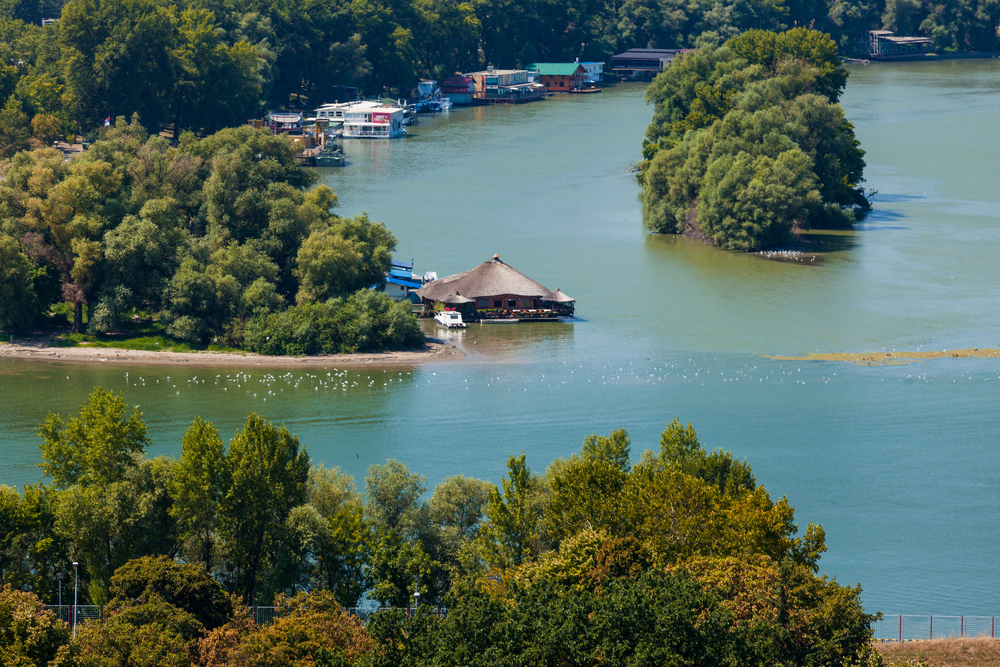 A few kilometres from the centre, "Ada Ciganlija" is now Belgrade's favourite escape from the chaos of the city, a green oasis where you can play sports, relax, and swim in the summer; however, few know of its turbulent past

Belgrade's seaside (beogradsko more), as “Ada Ciganlija ” is called affectionately and with a hint of vanity, is originally a river island lying on the Sava river, a few kilometres before it flows into the great Danube. Every year, hundreds of thousands of Belgrade citizens find peace and well-being in its beaches and forests. Its unique biological ecosystem benefits from the combination of water surfaces and woods (spontaneous vegetation grows in the centre of the island which is left wild) which creates a specific microclimate characterised by humidity and lower summer daily temperatures than in other parts of the Serbian capital.

A system of pumps and filters together with specific underwater vegetation ensure the purity of the waters of the artificial lake that delimits it on one side (Savsko Jezero) which also acts as a reserve of drinking water  for the municipal aqueduct. In the green areas that cover it for the most part there are oaks, elms, birches, willows, poplars, mushrooms, medicinal plants... you can meet birds, insects, and mammals such as hares, foxes, and roe deers, or you can fish.

"Ada" is also today the largest sports and leisure centre in the capital and has more than 50 fields for various types of sports, activities such as bungee jumping, rowing, climbing, water skiing; hundreds of national, European, and world water sports championships have been held here. The island is completely pedestrianised and can be toured on foot, by bike, or with an electric train.

Of course, there is no lack of food and wine on site, with many restaurants and bars lying on its banks. Until the 1960s, that is, before the transformation into a peninsula, it could only be reached by boat or by crossing a bridge of boats, while now many bus lines reach it daily.

The great Serbian playwright Branislav Nusic founded the satirical newspaper  "Vodeni cvet" (Efemera) on the island at the beginning of the twentieth century and, enchanted by its beauty, he nicknamed it "Ada", while Nobel laureate Ivo Andric defined it "Belgrade's Bay of Kotor". Many artists, writers, actors, and adventurers used to spend their days fishing and swimming in its waters, including the greats of Yugoslav cinema, Bora Todorovic, Dragan Nikolic, and Pavle Vujisic.

From the doubts about the origin of the name…

The chroniclers of the time argue that the epithet that accompanies "Ada" (a loan from Turkish to define a river island) goes back to the Celtic syntagm "singa" (island) and "lia" (land underwater), hence "Ciganlija" in a later transliteration; this would evoke the variability of the water level of the Sava river, respectively named "singa" when low and "lia" when high.

Some, on the other hand, argue that "Ciganlija" refers to the populations of the Roma ethnic group (cigani, in Serbian) present on the island before the Austrian occupation of Belgrade. One of the oldest testimonies of their presence dates back to those years when "Ada" was the scene of battle between the Turkish and Austrian armies, to which we owe the first bridges over the great swamp (now New Belgrade) that divided the island from the mainland. This thesis is also supported by the fact that in 1688 Venetian cartographer Vincenzo Coronelli drew the island on the Sava river on a map of the time and signed it in Italian as "Isola degli Zingari"; so did Giacomo Castelli da Vignola, cartographer of the Duke of Mantua, in a map printed in Rome and published in 1689 with the approval of the Vatican. In 1714 also the German “Zigeuner-Insel”, again “island of the gypsies”, appeared on other maps, fuelling more doubts about the true origin of the name.

The island was mentioned in one of the oldest archival documents signed by the Serbian leader Karadorde Petrovic; with a special decree of 1809  the revolutionary gave it under private management to Mladen Milovanoc, another revolutionary and President of the Council of Serbia; a few years later, however, the Turks repealed all previous regulations and since then "Ada" was no longer the private property of anyone. In 1821, Prince Milos Obrenovic declared it a state and national property (and so it has remained until today), but it was left in a state of total abandonment throughout the 19th century.

... to the Serbian Alcatraz

During the First World War "Ada Ciganlija" returned to being the scene of battle, this time between the Serbian and Austro-Hungarian armies, which advanced towards Belgrade across the river. In the 1920s, at the very beginning of the island, the Belgrade district court prison   was built, reserved for "more serious offenders”, most of them Communist political prisoners, members of the Communist Party of Yugoslavia, foreign spies or other organisations and associations opposed to the dictatorial regime imposed by Aleksandar Karadordevic. In the facility, from which it was very difficult to escape as it was surrounded by swamps and water, and which was called a "small Alcatraz", there were very difficult living conditions, similar to those of the infamous "Glavnjača ". Until the 1930s, there were no walls around the buildings, so the prisoners had to move in chains while executions were carried out in the adjacent courtyard.

After the Second World War the prison was used for the needs of the Department for the Protection of the People (OZNA) and once again mostly political prisoners ended up there, this time against the Tito regime. Although the news was never officially confirmed, General Draza Mihailovic, founder and head of the Chetni monarchical formations, was reportedly shot dead in the prison courtyard on July 17th, 1946. The facility was then closed in 1954 and the building later demolished in 1956.

The tree houses and the escape from socialist reality

Among the first "inhabitants" of "Ada Ciganlija" was architecture student Predrag Peda Ristic, who in the early 1950s built wooden houses  among the trees on the island. Novelist Momo Kapor, one of the most frequent guests of these first shacks made with wooden and mud boards, describes the atmosphere of the time as follows: "Sometimes we slept in that house waking up with the birds. As the tree grew, the house became one floor higher every year... here we realised that you don't necessarily have to live on the ground all the time... Every now and then someone fell from the tree and I still hear the dark thuds today. Sometimes we meet on the street and looking through the car windows we know how to calculate the height of the fall from our faces".

The audacious Ristic even proposed at one point to mass-produce a universal model of houses, in fact an entire settlement at a very affordable price; where there were no trees to cling to, poles of different heights could have been planted. For him, as for many others who wanted to depart from the Titoist regime, "Ada" at the time represented an escape from reality and conformity: "In general, the whole social life of Belgrade took place on the Sava both in summer and in winter. At that time there were no cafes and young people wandered aimlessly", revealed Ristic himself.

The idyll did not last long as his house was frequented every day by enthusiastic and rebellious young people who aroused the suspicions of some students belonging to Tito's youth, who saw them as potential enemies of the people, who did not fit into the desirable model of youth of the time: “A house full of young men and women during the bathing season, whose appearance and behaviour do not conform to Tito's youth and which, within the limits of decency, negatively affects the students”. It was therefore quickly decided to demolish the "wooden hut of 1.5-3.5 metres, 2.20 metres high, placed on three willows at the mouth of the Topčider river, built illegally, within five days". And so indeed it happened. 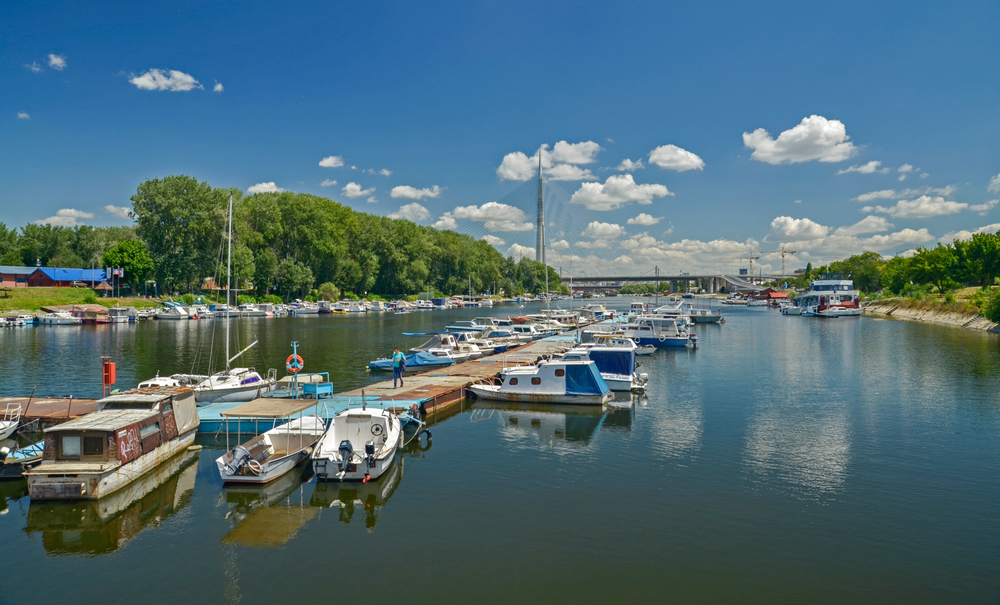 The transformation into a peninsula

It was shortly after that it was decided to "urbanise" and make the island as accessible as possible to the masses, connecting it to the mainland. In 1957 the People's Committee of the City of Belgrade formed a board for the construction of the "Ada Ciganlija Recreation Centre" and for over 10 years teams of young volunteers from the famous Tito brigades contributed to the cleaning of the island, the construction of the embankment, its deforestation, levelling, and final settlement. The beach gradually lengthened as plants and trees were felled, under the strict control of experts from the Faculty of Forestry of the University of Belgrade.

In September 1961, an embankment was erected outside the island that prevented the Sava River from escaping and flooding the area. Milan Pecinar, engineer and member of the Serbian Academy of Sciences and Arts, proposed making the place a source of drinking water and a sports and recreational centre; his vision became reality in 1967, when the works were finished, “Ada Ciganlija” was eventually connected to the mainland.

The monograph titled "Ada Ciganlija" reveals that in those years there was a dress code  that no one could violate: "The swimsuits that girls wear today were unthinkable at the time; women had to wear long skirts or costumes. So that nobody could break the rules, an attendant measured the length of the costumes and if he determined that someone was dressed inadequately he invited them to leave. Moreover, men were not allowed to sit next to women, let alone kiss them”, says one of the authors of the paper, historian Srdan Cvetkovic.

In the 1970s, the Politika  newspaper complained that the island was still in a state of neglect, overgrown with weeds and with willows and poplars destroyed by drought and illegal logging. Journalist Dusan Savkovic stressed in an article that the turnout was very low and that "as in Turkish times, pensioners, naked to the waist, pay a dinar to enter a place left to itself". "Times are changing" he continued, "today it is not enough for Belgrade citizens to pour a bucket of water over their head and have a tomato salad. They want a mini-golf course”.

In 1973 for the first time, “Ada Ciganlija” appeared in the illustrated postcards next to Kalemegdan, the monument to Pobednik, and Skadarlija, and began to become one of the symbols of the city; it was now clear that its development could no longer be deferred.

In the early 2000s some huge investments allowed to fix the bathing area and renovate the showers and public toilets; with the construction of new sports fields and the modernisation of the electricity, water, and illumination network, "Ada Ciganlija" finally took on the shape we know now.