Who Are We? II 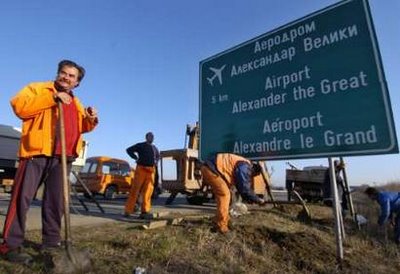 Macedonians have become bitter with each other. Over themselves. Over who they are. Over whether they are Slav or ancient Macedonians. Op-eds and commentaries have overwhelmed the press; the blogosphere has overheated. It all started because of a monument

Macedonia's most acrimonious identity controversy within recent memory has not calmed down. Macedonians have become bitter with each other. Over themselves. Over who they are. Over whether they are Slav or ancient Macedonians. Op-eds and commentaries have overwhelmed the press; the blogosphere has overheated. The controversy started because of a monument.

Some confrontation can be good for democracy, but stark polarization threatens social fabric and solidarity. In addition, anxiety pushes conflicts out of control. Recently, a public debate was broken up in Struga, apparently by a group of local thugs. The debaters belonged to the anti-antique camp; the thugs were apparently convinced ancient Macedonians. The author of this commentary received an email threat over the first part of this article.

The conflict emerged earlier in 2009 when some in the press began to speculate about the government's plan to erect a statue of Alexander the Great on the central square of Skopje. According to media reports, the monument was to be of gigantic proportions; some 30 metres high, with Alexander riding on a horse. Authorities were not available for comment. The project seemed to be conducted in secret - according to some, the monument had secretly been built in Florence, Italy - and that only exacerbated the increasing fear. In late December 2008, the government decided to rename the main north-south motorway in the country into Alexander the Macedonian. This was the most recent in a long list of places and edifices given antique names since the rightwing VMRO came to power in 2006. Many Macedonians love that practice and enjoy feeling they are descendents of the great emperor, but many others do not agree.

The horseman on the square was probably the last straw. Leftists set off a storm of reactions opposing the monument and what they saw as an explicit government agenda for the "antiquisation" of Macedonia. The leaders of the opposition social democrats (SDSM) , and their candidate for the upcoming presidential elections, Professor Ljubomir Frckoski, led the opposition to the project; they were joined by a significant group from civil society, intelligentsia, and the media. An influential journalist, Vasko Eftov, who hosts the most popular political television show in the country, focused on Alexander and his horse in two of his broadcasts in February. He was, perhaps, most directly responsible for forcing Prime Minister Nikola Gruevski to step forward and explain. Just a day after Eftov's show, Prime Minister Gruevski appeared live on the evening news to clarify the matter.

Gruevski said the monument is one of a series that the municipality of Centar (an autonomous self-governing locality within Skopje's metropolitan government) planned to install in the central city area. The monuments will commemorate different periods from antiquity, through the Roman and Ottoman eras, to more recent times. The prime minister also implied he was not well acquainted with the project and he had to call the municipality to understand the project's intent. Some in the press criticized his statement as a lame attempt to step back from a project pushed by the central government. The government seemed to try to recoil in face of strong public disagreement.

Only recently, Prime Minister Gruevski reconfirmed his mandate by a snap national vote, which he won by a landslide last summer. His VMRO party controls parliament with a majority no party has had since independence. Gruevski's support appears stronger than any other politician in Macedonia. His government works hard on economic issues and fights rigorously against corruption.

However, the government's efforts in the economy have apparently been obscured by some of the "cultural" projects it has sought to promote.

"They are trying to impose their own values on everybody, thinking their values are everybody's. Well, they are not. I don't want to look at Bucephalus' balls on the city square," said Skopje's mayor, Trifun Kostovski, on Vasko Eftov's show last week. The mayor of Skopje opposes the actions of the autonomous Centar municipality, controlled by VMRO party members. Instead of Alexander the Great, the mayor wanted a monument of Toše Proeski, the beloved pop star who died in a tragic car crash in October 2007.

Some people who trusted Gruevski say they are now a bit disappointed. A citizen says, "I voted for him because he said that his party would help the farmers and rebuild the economy; not because they offered to build a gigantic Alexander and ban abortion. They didn't say that in the election campaign." The possible banning of abortion, practically a non-issue in the country in the last 50 years, has also been recently stirring passions. The opposition and some NGOs accused the government of preparing to move in that direction.

"We never wanted to ban abortion," said Gruevski last week, "We just wanted to run a campaign which would explain to young people the consequences of abortion".

He denied claims that VMRO was trying to antiquate Macedonian identity. He said, "We have enough divisions; in Macedonia, there are neither ancient nor Slav Macedonians. There are only Macedonians."

When asked to comment on the commonly heard claims that Macedonians are stealing Greek history, Gruevski habitually says that ancient history belongs to the world:
"Why we can't use symbols from ancient history when so many other nations use them?"

This is a fair argument. Yet, critics counter by noting that Macedonia is going far beyond just using an occasional symbol from antiquity.

Since the early 1990s, many Macedonians embraced the view that their identity stems from 2,500 years ago in antiquity. However, many others seem perfectly comfortable with their Slav origins and smirk that no modern national identity reaches back 2,500 years. The sad thing is, by now, we should have moved beyond identity questions.