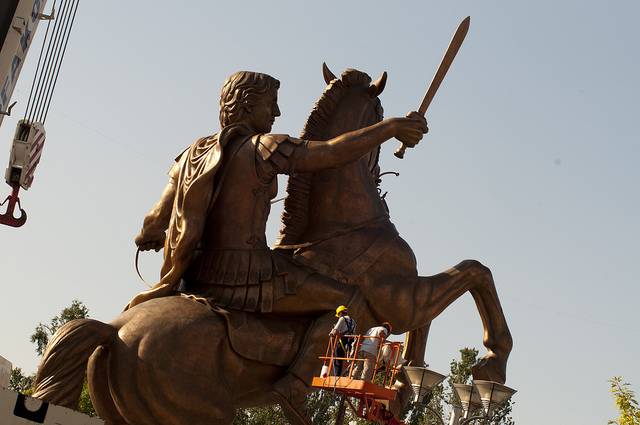 Skopje, the monument of Alexander the Great - Mite Kuzevski/flickr

On 21 June, the controversial, colossal monument of Alexander the Great, officially called “Warrior on a Horse” was finally erected in Skopje’s central square. Close to 30 metres high (including the 10-metre concrete pedestal), the sculpture dominates the capital’s central area. The monument, which reportedly weighs 30 tons, is higher than the surrounding buildings.

About a week was needed to assemble the parts, which caused a stir when they first appeared at the site. Finally, Alex was easily lifted up by a large crane and placed on his platform in front of hundreds of observers. Macedonians are not easily amused, but this was a rare occasion. Some people spontaneously sang the national anthem as the monument was being lifted. The whole process took less than an hour. According to plans, a fountain, together with eight lions and eight soldiers, will surround the statue by October. The total project will cost an estimated 9-10 million Euros. The monument’s designer, largely unknown by the public, Valentina Stevanovska, reportedly was paid 650,000 Euros for sculpting the warrior. Many Macedonian, and not only artists, could only dream about receiving a payment this large.

Simultaneously, two smaller monuments of Phillip II, Alexander’s father, or as the joke goes, “the father of the warrior on the horse”, were put up, one in the Avtokomanda district of Skopje and one in the southern Macedonian city of Bitola.

The warrior’s arrival was a big day for the VMRO government’s project of national renaissance, widely referred to as antiquisation.

The Greeks were angry, but for the time being, probably less angry than some might have expected. Their political leadership made several statements: First, they currently have higher priority concerns; second, perhaps (and hopefully) the whole thing does not deserve a serious comment. Actually, perhaps the most mature thing they could do, would just be to say, “Fine, no big deal”.

Nonetheless, many international media and observers assessed the move as a deliberate provocation by Macedonia. It is easy to agree with this position, even for many Macedonians.

Moreover, the Alex statue has divided the nation, and that is perhaps the saddest effect. Those against it (including this correspondent) will probably say it is politically immature, aesthetically dubious (many will just say it is outright kitsch), and economically simply unfair to spend such amounts on glamour when both unemployment and poverty in the country stand at around 35%.

Few will now remember that when he initially came to power in 2006, Prime Minister Nikola Gruevski, re-elected for a third straight time in the recent snap vote, frequently used the phrase “poverty reduction”. Lately, he has not used it; at least, not with the old zest. Of all of his projects, the biggest one turned out to be the remodelling of the capital Skopje’s centre, most of it redone in neo-baroque with many monuments. The city should consider bidding for the Guinness World Record of a city centre with most monuments per capita.

Many Macedonians support Gruevski’s cultural project, as indicated by the election results: He has just won four more years in power.

The pro-Alex arguments often go along the line of, “Who are the Greeks to tell us what to build?” In addition, enough people in Macedonia really believe they are descendents (no matter how distant) of the great antique warrior. One should never underestimate the power of denial.

An argument exists that Alexander is part of the cultural heritage of the world, hence not an exclusive Greek property, and that Macedonia has the right to celebrate him as much as anyone else. That is only fair, but Macedonia politicians seem to have an obsession.

How did it ever come to this? In the decade up to 2008, the Macedonian name issue was almost forgotten. Many felt that the best way to resolve the rather irrational dispute would be to simply shove it under the carpet. Many had forgotten it, except some Greek politicians. They patiently waited for their moment – the NATO Bucharest Summit, to slam the door in Skopje’s face. It was a defining event for Prime Minister Gruevski, transforming him from a young lad willing to play along into an ardent nationalist ready to spite both the Greeks and the international community.

It takes two children to fight in the sand. The sand box also must be right. The Brussels-made brand has just the properties so that when the older child bullies, the smaller one can not possibly run away.

However, even Brussels cannot be blamed for everything. It is only right that the Macedonian political leadership does not just bow before every hypocritical whim of power in international politics. Nevertheless, that does not explain the conflict.

Macedonia’s current leadership suffers from illusions of grandeur. Or, simply, they are overdoing it. Its projects are grand and majestic. If it is computerisation of schools, it has to be at the scale which makes it impossible to work; if it is a building, it has to be in a neo-baroque style, forgetting that Macedonia’s grand architectural legacy is probably the Mustapha Pasha Mosque, that is, from the Ottoman tradition. If it is a monument, it has to be gargantuan.

Nonetheless, a few things in the country are larger than Alex. The growing external debt, the potholes in the roads, the percent of young people who see no way out of poverty but to leave the country.