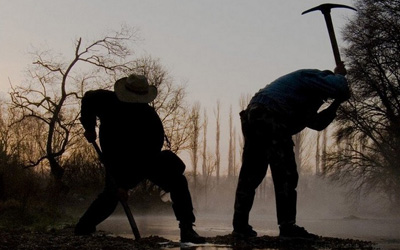 In Macedonia, economic crisis has spurred a new trend: treasure hunters are increasingly scouring the furthest reaches of the country in pursuit of Ottoman gold, Roman antiquities and other treasures. Whether basing their searches on actual history or dubious legend, hunters are going to great lengths to cash in on the proverbial jackpot...often illegally.

Everybody knows there is a big treasure hidden somewhere in Macedonia. Nobody has found it yet, or if they have, they haven't shared the news with others. But the day will come. Treasure tales are so abundant that sometimes the greatest problem is deciding which of the legends about hidden treasure to follow.

Treasure hunting has become popular in Macedonia in recent years. Driven both by lack of economic perspective and adventurism, treasure huntes have begun a veritable crusade in the country. They collect verbal records of old legends from village elderly, buy dusty maps in Istanbul and, often well-equipped, search the countryside.

One story for example, says that the grandfather of Malina Nikolova, a real person from Veles, a city in the middle of the country, was the chief of the village called Stari Grad (Old Town) in the Veles area back in Ottoman times. When the Ottomans were leaving the Balkans, they proportedly gave Malina's grandfather 12 pots full of gold to watch over until their return. The Ottomans never returned, of course. Many believe that the gold stayed there, likely hidden in or near a now-abandoned house. In the past few years, treasure hunters have dug there many times. Nobody has yet reported finding anything.

Last year the police arrested five men who were digging in the yard of an old 13th century monastery, St. Atanasij, near the Tetovo village of Lesok. By the time of the arrest, they had managed to dig up a human skull and a few bones. The monastery had stayed unknown for centuries - it was buried in the ground - and it was only discovered in 1927 by a Russian monk by the name of Teodorit. Some experts say the treasure hunters were probably looking for the grave of Teodorit, hoping it could contain valuable items.

Hunters of this type of treasure follow the logic that fortune could be hidden nearby old monasteries or churches. They hope that, despite the fact that monks rejected earthly pleasures and lived in a state of penury, some of them amassed and buried some gold for rainy days. Thus, they search for treasure near places named after a church or a monastery, such as Krstovi (Crosses), Crkvishte (Churchtown), Kalugjerishte (Monktown), or Manastirec (Monasterytown).

The legends also warn of dangers. Turkish gold is said to be cursed. According to legend, before leaving their hidden gold, the Turks protected it with a spell that would curse anyone who touched it. The Romans, on the other hand, protected their hidden treasures with poisons or booby-traps.

Equipped with old maps smelling of mystery and often cutting-edge equipment, treasure hunters have dispatched across the country in pursuit of the stuff dreams are made of. They dig, search the mountains, dive in lakes, crawl through caves and climb rocks. For some, it may be about fun and adventure, but some become consumed, even obsessed, by the passion. In a case a few years ago, a murder was motivated by a treasure map. The victim and the murderer were friends and partners in treasure hunting.

Not all hunters are looking for hidden treasure. This summer, "gold fever" inflamed the south of Macedonia around the mountain of Kozuv. Gold hunters encamped near the rivers of Doshnica and Boshavica and spent the summer panning for gold. Archaeologists agree that there is evidence that these two rivers, and many more on the mountain of Kozuf, were gold-bearing in ancient times. Along the river streams there are remains of what archaeologists say were rich settlements in the early period of the Roman Empire. "No wonder gold hunters are interested in this part of the country," said professor of archaeology Viktor Lilcic. He said that Kozuv had always been rich with gold and was a magnet for gold seekers also back in Roman times.

Geologists also confirm that some rivers on Kozuv flow through areas which are considered gold-bearing. They indicate that the river of Mircevica could be gold-bearing but, in greater likelihood, the river of Konjska may hide rich gold deposits.

Sociologists agree that romantic pursuits for hidden treasures reflect the deep economic crisis and widespread poverty. People strongly desire a way out of the dire economic situation. In the absence of other tangible alternatives, some old Turkish or Roman gold could very well make all their problems disappear.

And yet, not all hunting is an elusive pursuit of romantic dreams. Another less Stevensonian but definitely lucrative treasure hunt has been going on in Macedonia for years. It is called "wild digging," an expression used to describe illegal excavations at archaeological sites. The empires that have passed through Macedonia over millennia have all left a layer of history. People say, "dig just about anywhere and something will pop up."

Wild digging is illegal and, in an attempt to fight it, the government has toughened sanctions in recent years. There were a few trials against wild diggers last year alone. In one case, a few boxes of antiquities were found by Slovenian police on a regular bus from Skopje to a destination in Germany. The dispatcher of the shipment had simply told the driver he was sending jars of ajvar, a traditional pepper paste, to his cousin. The items were only discovered after having easily passed several borders, and even then, only by chance.

Poachers of archaeological sites are well-equipped and organized and they have stable foreign markets for their goods. They are further motivated toward the black market by the fact that the government offers only meagre official rewards for archaeological items which, when found, have to be handed in to proper cultural institutions.

The business of wild digging is experiencing a relative boom period. A lot of the smuggled goods go to Greece, but a lot also go to Western Europe.

The smuggled items can range from modestly priced artefacts to essentially priceless pieces of cultural heritage. But then again, why not sell it for a few hundred euros when the government certainly wouldn't even give that much? Experts say wild digging slowly but surely depletes the country's cultural heritage.

It is not a day-job; that much is clear. In fact, most digging, the illegal kind at least, takes place by night. Alas, somebody has to do it. Treasure is, as always, within reach.