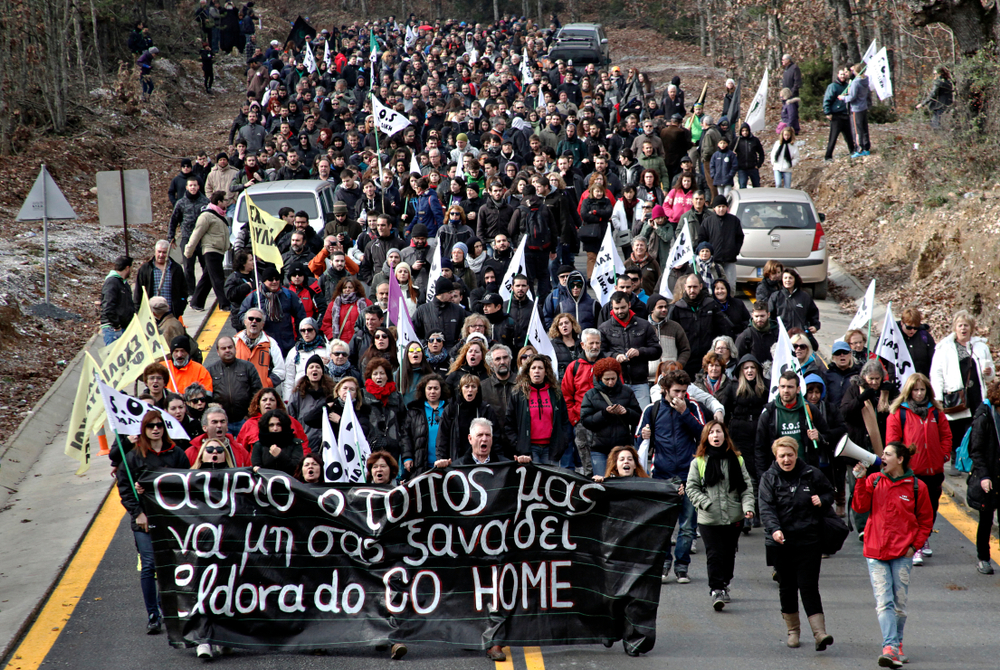 With the crisis, pressure on subsoil resources, minerals and hydrocarbons has increased in Greece. In Epirus and other regions local communities, worried about the long-term effects on the environment and quality of life, decided to react

Tourism is a natural option for economic growth in Greece. So is the exploitation of mineral, oil, and gas resources, which has increased in recent years. So, where is the problem? Hydrocarbons in particular, as a predominant source of energy, are the cornerstones of contemporary civilisation. What could be wrong with Greece wanting to exploit its natural wealth?

An El Dorado in the Balkans

In the 16th and 17th centuries, the name “El Dorado” described a place of extreme wealth in the New World, waiting to be discovered by the conquistadors. Eldorado Gold is also the name of a Canadian mining company with assets in Europe and North and South America, that in the early 2010s launched its project to extract gold and other metals in the region of Chalkidiki, Northern Greece. The investment met huge reactions by the local communities concerned by its environmental and economic impact, that eventually led to the legal prosecution of several protesters, 21 of whom are currently on trial for alleged arson in the company’s facilities.

A new wave of grassroots movements, this time against oil and gas exploration and extraction, has been growing in several areas of the country. As the WWF puts it in a report published last February, Greece's “hydrocarbon frenzy” started as an answer to Greece’s economic recession and involves a total of 59,450 Km2 in Ionian and Western Greece, Crete, Peloponnese, and Epirus. ExxonMobil, Energean Oil and Gas, Repsol, Petra Petroleum, and Schlumberger are among the companies who have acquired or applied for licenses to search and drill hydrocarbons.

As Greenpeace executive director Nikos Charalambides told OBCT, the areas of interest are ones of environmental significance, such as Kyparissia in Peloponnese – one of the most important nesting beaches in the Mediterranean for the endangered Caretta caretta – or Epirus, probably the country's most important ecosystem with some of the clearest rivers in Europe, high water quality, and apparently its own share in the Natura 2000 network.

Despite assurances by the Ministry of Environment and Energy that protected areas under Natura 2000 network would be excluded from any operations concerning hydrocarbons, Greenpeace states that the opposite is happening: “In fact, research for hydrocarbons is carried out within Natura sites, which means explosions and holes in important ecosystems, without even complying with the established procedures, such as an Environmental Impact Assessment with adequate public consultation”.

The lack of public consultation – especially with local communities – has been one of the main elements supporting the claim that the procedure of licensing oil companies was against the public interest.

The rise of local environmental activism in Greece

As happened with the communities in Chalkidiki protesting “Eldorado Gold”, residents of Epirus also formed committees to organise against hydrocarbons extraction – they protest, sign petitions and even dance to raise awareness. OBCT talked to a group of women from Epirus, that recently gained publicity for its folk approach to environmental threat.

The group’s name, Vrisoules, means “little fountains”. Fountains with flowing crystal clear waters can be often found in the little villages of Epirus. The mountainous region, the poorest in the country, remained untouched by the negative effects of growth and thus maintained its unique character and rich landscape. Vrisoules members wear traditional dresses and dance to the mourning rhythm of a traditional song that says “farewell little fountains, mountains and ridges”.

The search and drilling of oil and gas will “affect beyond the landscape, ground and underground water, biodiversity and most likely will increase seismicity, as it has happened in other countries too”, Vrisoules told OBCT. “It will also affect the health of the residents. It is known that in mining areas cancers, asthma, etc. increase dramatically (and that) pollutants in the food chain can affect the future generations”.

Vrysoules have organised public protests, such as a performance at the ancient Odeon of Herodes Atticus , sponsored by Greek company HellenicPetroleum, which also wants a piece of the HC pie. One of their placards read “oil or feta”, to point out that “agricultural and fishery products will lose the brand name of purity” and that anything depending on the quality of the environment will be soon at stake.

Profit is the main argument

In his article on the newspaper Avgi, which is tied to SYRIZA, Hellenic Petroleum Director of corporate affairs Υannis Koronaios defined the oil or feta dilemma “communicative fireworks without scientific background”, adding: “all the data say that if there are exploitable resources, with the current technology we have the right to dream something better for our children. The revenues from hydrocarbons will be directed to the wounded insurance system and wherever else it is decided, greatly benefiting Greek citizens”.

The argument of revenues for the Greek state leaves environmental organisations skeptical. Both Greenpeace and the WWF agree on the existence of a false narrative, according to which gold and oil exploitation will contribute to ending the crisis.

In a recent article, the WWF refers to the case of the oil drilling in Prinos, where the company Kavala Oil S.A.declared loss in 2016 and thus paid zero corporation tax to the state, while the Greenpeace executive director told OBCT: “Any public benefits depend on both the international oil price and the oil company itself, which can easily raise mining costs in order to significantly reduce the expected benefit for the Greek state. Also, the financial cost of inevitable pollution (e.g. leaks) is not calculated, especially in the case of a major accident with a probable permanent impact on ecosystems and local communities”. Greenpeace concludes that dependency on fossil fuels starts collapsing globally and that tourism in Greece, which will be affected by the investments in HC, contributes 27% of the country's GDP, i.e. 45-50 billion Euros per year.

Indeed, tourism is considered the driving force of the Greek economy. Areas like Epirus are moving towards eco-tourism, and oil and gas exploitation would immediately hamper such trend rather than generate profit.

For Vrisoules Epirus, however small is a big struggle, not only because “the last clean areas of the planet must remain clear, as we only have few”, but also because of climate change.

As Nikos Charalambides explains: “According to a report by the Central Bank of Greece, the cost of climate change for our country is expected to exceed 700 billion Euros – an extremely conservative estimate. In order to have more than a 50% chance of avoiding the worst effects of climate change, we must immediately start weaning ourselves off fossil fuels and completely stop using them before the middle of this century”.

Locals like Vrisoules from Epirus, Greece, but also small farmers from India or inhabitants of small island states are among the first to understand the impact of increasing temperatures, either because they already experience it or because they fear to lose the right to choose the quality of life they want.

Amidst another frenzy of top-down politics or initiatives for green and sustainable development, such as the UN’s SDGs, local communities seem to have already embraced a sustainable way of thinking. As Vrisoules put it, they want their message to be as clear as their waters in Epirus.