The Oasis of Peace 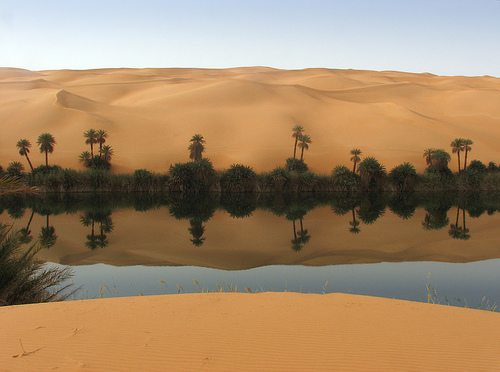 The Oasis of Peace - this how Macedonian politicians used to refer to their country earlier in the 90s. The conflict arrived in 2001, though Macedonia was lucky to have a more confined one than others around. Still, the country is a fair shareholder in the sad reality of a tormented region

The Oasis of Peace - this how Macedonian politicians used to refer to their country earlier in the 90s on account of the miraculous absence of armed conflict that was devastating the rest of former Yugoslavia. The phrase always had a nuance of naive ludicrousness in it, although it was clear that it was used as cliché in meetings with foreign counterparts. The conflict eventually arrived in 2001, though Macedonia was lucky to have a more confined one than others around. Still, the country is a fair shareholder in the sad (or better sick) reality of a tormented region, and it fights for leadership in many respects.

What foreign diplomats, living in Skopje back in the 90s, never missed a chance to underscore as a quality of life in the capital city, was the feeling of safety. Something many of them coming from huge metropolises in the West had long forgotten the taste of. The fact that you can stroll the streets anywhere in town after midnight without looking behind your shoulder, perhaps even tranquilly whistling.

Today Macedonia is among the countries with highest annual incidence of death from firearms in Europe, with 42 deaths to a million inhabitants , following the absolute champion Russia with 265 and Estonia with 62, reports the Macedonian National Rifle Association. Its average is ten times that of the EU which has 4 firearm murders per million people in a year. World leaders are Columbia and South Africa.

A lot of the weapons are reported to have flooded the country in the aftermath of the 1997 Albanian mayhem when police and army weapons storages were looted amidst nationwide civic disorders. Some 600.000 pieces of weapons had been estimated stolen then. Still this is but one of the easily identifiable sources. With all the wars in the Balkans, arms trade has been looming large for over a decade now.

The end of the 2001 armed conflict left the country with an estimated 100.000 pieces of illegal weapons. The project for amnesty for the involved in the conflict, a logical step in negotiated peace deals, was preceded by a nationwide disarmament campaign that ended in December 2003. Managed by UNDP, the campaign was endorsed by the government and all political subjects in the country and the international community, and was completed as a declarative success, with something over 7.500 pieces of weapons being decommissioned. The significance of the campaign was rightfully sought in the political will to undergo it rather than the amount of weapons collected. The observers and the general public part ridiculed part raged over the decommissioning of museum old arms samples from the early 20th century (some even form the 19th) , in order to have at least some numbers to report, and the national lottery organized as an incentive, with a car as the grand price.

The weapons remained and people slowly got accustomed to using them more and more as a way of sorting out problems, expressing anger or frustration, making a living.

There are at least 2 bomb attacks in Macedonia every month. They are usually activated in people's yards or underneath cars as a debt reminder, extortion pressure, or tool for any kind of revenge. There are plenty of them to go around, plus they are cheap to buy. A man in Bitola last year entered the house of person who reportedly pouched his wife and took the man's kids hostage. In addition to having an automatic weapon he also had 2 bombs one of which he activated wounding the children before eventually being shot dead by the police. Even more effective weapons, such as bazookas were used on several occasions either down-town Skopje or in quiet residential areas, for settling business accounts.

Crime moves in trends too, although there are evergreens. This last summer the biggest trend was robbing gas stations. A total of 24 of which 17 in Skopje, happened. People with masks and guns. Employees are advised by company management to just hand over the cash. The police is incapable of stopping it. Another parallel trend is exchange offices and banks, over 20 of them in Skopje alone in the last several months. Broad daylight, a mask and a gun. The trend before that, but still in fashion, were cabdrivers. The latest trend - postmen who carry the cash for the pensioners. Armed robbery is everywhere. And it is only nickel and dime.

In its report on corruption for 2003 Transparency International said that Macedonia is among the most corrupt countries in the world. In a list of 133 ranked states, only 27 from Africa and Asia are below Macedonia which seconds only Ukraine in Europe, and shares its trophy with Serbia and Montenegro. Macedonia plunged down 40 places from 1999 to 2003. In the same period of time it got a Law and a State Commission on Corruption, but no results. "Crime rises proportionally with the number of special government bodies created to fight it", says docent in criminal law, Nikola Tupancevski, from the Law faculty in Skopje. Over 600 cases of criminal charges against corruption were made since the beginning of the year, however very few indictments and virtually not one single verdict. The police blame it on the prosecution and the courts, the courts on flawed legislation, the experts back on the institutions and lack of political will and coordination. Then the institutions blame it back on the general living conditions and the poor economy.

Crime does well what governments and peoples of the region can not achieve - cooperation, both regional and multiethnic. For Europol, the major obstacle to fighting organized crime in the Balkans is the fact that each government is trying to do it alone and there is practically no exchange of information. Many regional initiatives, networks, projects, programs and actions were created and politicians from the region are popular guests on high-profiled conferences on crime. The EC is louder in voicing organized crime as the major concern for the Balkans.

Macedonia is in the group of the most risky places for foreign investment, according to a recent ranking by the Control Risk group. It is in the company of Afghanistan, Burundi, Rwanda, Kosovo and a dozen others. "Staff and assets are under constant threat of violence and theft" reads the report of Control Risk.

Three Macedonian citizens were arrested last year in Bolivia, along with 2o others, in a US supervised major drug bust that seized 3 tons of cocaine worth half a billion dollars. It was supposed to be extracted from its potato powder cover in Bulgaria and then through Macedonia, distributed in the West European market. This is but a highlight of the reality of life on the crossroads of several major drug routes. Drug abuse is reigning among youth. "It is only rednecks who stay on grass" the saying goes.

The Macedonian Information Agency reported back in August of this year, referring to CNN, that according to high FBI officials, organized crime groups of Albanians from the Balkans had started to threaten the position of Cosa Nostra families in the US. According to FBI, many of them came in the last several years from Albania, Macedonia and Kosovo, operated mostly on the East Cost and manifested severe brutality.

Last year, the Greek Elefteros Tipos daily, published a secret report of the Greek Foreign Ministry on Albanian armed groups in the Balkans. The report reading many names stated that the activity of the groups is a combination of nationalism and organized crime where the former is often used as logistics for the latter.

Another major route Macedonia is on is human trafficking. Last year the US Ambassador in Skopje openly criticized the Macedonian judiciary for the extremely mild sentence the court in Struga pronounced to the so called king of women trafficking in the region, the Balkans flesh-peddler Dilaver Bojku Leku. For months prior to the eventual trial the police were simply afraid to arrest him though his whereabouts were publicly known. He ran his business from a village near Struga, reiterating he is a businessman. The police were afraid to enter the village. Shortly after the verdict, he was put in a minimum security local prison and of course escaped. He was arrested a couple of weeks later in Montenegro, surely not without a lot of international pressure on authorities to take the action.

Over 2,000 women are reported to be enslaved and forced to prostitution in Macedonia. They are often tortured to perform for their "proprietors" and there are several cases in which they were killed.

Last headlines from Skopje, a week old, bring the news of an armed group of Albanians, controlling a village, Kondovo, practically merged with the capital, threatening to shell the city unless amnesty given for acts related to the time of the conflict, social benefits, and even some diplomatic passports granted. No one gets overly excited to read of this. Negotiations are under way.

Opening a concern that had practically been non-existent before, an EU expert on terrorism, Claude Monique, openly pointed last week to the leader of the Islamic Community of Skopje, Zenun Berisa as a promoter of radical Islam and a link to Saudi Arabia funding for a religious Islamic school in the country. "This might be a beginning of something very dangerous" said Monique.

Anecdotally, for the end, Macedonian police arrested this summer Carlito Brigante at the Skopje airport. Real name Vulnet Makelari, he had changed it after his movie hero Brigante, played by Al Pacino in a Brian de Palma hit from '93. A notorious desperado, the Macedonian Brigante was warned by policemen not to shoot at a wedding, in Debar in 2002. He took the policemen hostage for daring to distract him during a festivity and only let them go after an action by their colleagues and intense negotiations. Was arrested for trial later but fled the country as not detained. At the time of arrest he was returning to Macedonia from Italy where he did time in prison for crimes done there.

But a regular day in the oasis of peace.