The Museum of Freedom 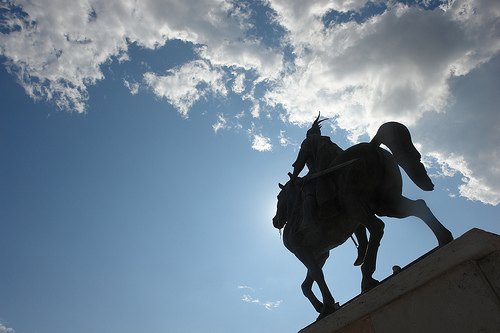 If there is a multi-ethnic country in former Yugoslavia which managed to preserve both diversity and integration, it is Macedonia. However, as the saying goes, marriages are constant work and every day brings a new challenge.

On the official Albanian state holiday "Day of the Albanian Flag," celebrated every 28 November, Ali Ahmeti, the leader of the Democratic Union for Integration (DUI), declared open the Museum of Freedom. This ended almost a year of controversy surrounding the project, commonly referred to by the public as the Museum of NLA (National Liberation Army). The NLA was the armed guerrilla movement, and DUI's military predecessor, which led the 2001 conflict in Macedonia. In 2001, the NLA's armed struggle to achieve greater recognition for the country's Albanian minority culminated in the Ohrid Agreement. In exchange for greater rights for ethnic Albanians, the NLA agreed to give up separatist demands and recognize Macedonian institutions.

For many Macedonians, mention of the NLA still invokes thoughts of "terrorists," proof that history still has very powerful links to the present. Although DUI has not been part of the ruling coalition since 2006, remembering its history is, nonetheless, significant.

"My heart tells me that history is being born right here, in Skopje, the ancient city in the heart of Dardania", said former NLA leader-turned-politician, Ahmeti, at the opening event. "Our patriots have fought for it for centuries, but it is us today who have the destiny to celebrate the opening of the museum. Fighters from Kosovo are here to congratulate us. Albanians are free today. Albania is in NATO. Kosovo is independent. Albanians in Macedonia celebrate the flag," added Ahmeti.

A great day for the Albanians. And a great day for DUI. The creation of a museum dedicated to the NLA was the party's pre-election promise. Historian Skender Asani said the occasion was the greatest day for Albanians since 2001.

It is naturally not the first monument dedicated to the NLA - countless memorials have sprung up in Albanian communities and across the countryside since 2001. But this museum is the first to be built in the capital and the most important.

Realization of the museum did not come easily, but hurdles were eventually reduced to business as usual. The project has stirred controversy since the beginning of 2008 when Mayor Izet Mexhiti of Chair, Skopje, a predominantly Albanian quarter run by DUI, pledged to restore a historic structure to house the museum. DUI was in opposition at that time - the ruling coalition comprised VMRO and the DUI's arch-opponent: DPA led by Menduh Taci. The chosen structure was a house built centuries ago by a Turkish Bey (high Ottoman official), Jasar Kumbaradzi, known as Jasar Bey.

The DUI's idea did not fare well, especially with the country's cultural heritage authorities.

Pasko Kuzman, a well-known archaeologist and director of the Directorate for Protection of Cultural Heritage, opposed the project arguing that the Jasar Bey house was a site of historic significance protected by law, and that it could not be touched without express permission. Kuzman said he would press criminal charges against the mayor of Chair should the municipality start restoring the house without a license.

"Fine if they want to restore the building and open a museum, but they should do it in compliance with existing law and not some unwritten customs," said Kuzman.

The initial confrontation between Kuzman and Mexhiti stretched over weeks and involved cynical retorts bantered through the media.

The framework for the confrontation was the noncompliance by the municipality of Chair with regulation on protection of cultural heritage. But underneath, in the consciousness of many Macedonians, there was a deep discomfort with the idea of a museum dedicated to the NLA. The sense of bitterness was only aggravated by the apparent defiance of Mayor Mexhiti, who pledged step forth with restoring the house, whether in compliance with the law or not.

Jasar Bey, who is also sometimes referred to as the first mayor of Skopje, built the house around 1885 on the place of the previous family house which had been destroyed by fire. The house belonged to his grandchildren until 2003, when it was sold to an émigré. In 2007, It was placed under protection as a site of historic and cultural significance. It is located in a part of town near the so-called Plastic Bazaar.

Mexhiti accused Kuzman of not caring for the house. The house's upkeep, which had suffered decades of neglect under private ownership, was transferred to the municipality on a long-term lease by the new owner, who was living in Switzerland.

Mayor Mexhiti also accused Kusman of using the house as a pretext to oppose the NLA museum. He told Kuzman "to mind his own business", if he could not at least show some gratitude to the municipality for saving the house from wasting away.

Following the extended public confrontation, the Anti-Corruption Commission also became interested in the affair and the possible misconduct by the mayor of Chair and filed charges. The Public Prosecution looked into the charges and it eventually dropped them with the explanation that there had been no actual restoration works conducted on the house apart from an old barn in the yard being torn down. It seemed that the municipality had not engaged in any works on the ground after having announced its initial plans.

Then came the early national elections in July. VMRO's traditional Albanian partner, DPA, lost the vote rather embarrassingly. The party was singled out as the major culprit for the election irregularities which shamed the country internationally. VMRO entered into a pragmatic coalition with DUI. Suddenly, prospects for the NLA museum brightened up.

Even though the municipality of Chair still did not have all the papers and permits from the cultural authorities, restoration work began. The fact that DUI was in power "helped secure the understanding" of the institutions in charge of protecting cultural heritage, including Pasko Kuzman's Directorate.

"We are partners in government now and we have come to an agreement. For us, the most important thing is that the house remains a cultural monument and preserves its authentic look. We neither want nor can prevent it from becoming a museum. Each person has the right to present its cultural heritage," said Kuzman.

All is well when things end well. This, of course, is easier when in power than when in opposition. But that is the nice thing about integrative power politics in Macedonia. Perhaps, with time, it will be good to do it with less tweaking of the rules.

By November, the museum was ready for its grand opening. Of course, no Macedonian politicians were present. Partners in marriage - in Macedonia, that of diversity and integration - need some space.

The newly opened Museum of Freedom tells the history the Albanian minority in Macedonia from the period of the Prizren League in 1878 until the 2001 conflict. The artifacts include old weapons, photographs, coins, documents, NLA uniforms and flags. Not many Macedonians are likely to visit it, at least for some time to come. Even in marriages, some memories remain a private affair.