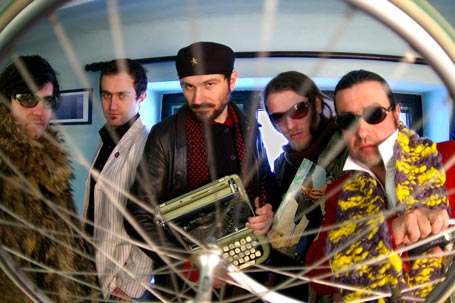 With their passionate, non-conventional music, theatrical contaminations, and growing domestic and international success, "Foltin" looks like the next best thing in Macedonian music. Osservatorio interviewed the group's singer and front-man Branko Nikolov

Their most recent album, Ova transplantirana masina za cukanje dosega ne tipkala ljubovno pismo (This transplanted machine has never typed a love letter), was released in 2008. They say the phenomenon of love text messages via cell phones inspired this album.

With 14 years of existence and 5 albums, they are now one of Macedonia's greatest, if not the greatest, musical attractions. Many would say they are Macedonia's most authentic and unconventional musicians; but unconventional not in the sense of pretentious artists that scare most people away. Their music is fresh, warm, infinitely imaginative, and has the power to make people feel embraced and uplifted. Their fame has also been spreading internationally.

Critics have had a hard time defining what kind of music Foltin actually plays. Their work reveals a plethora of not influences, but flirtation with genres. Furthermore, Foltin has a passion for unusual instruments. In 2000, when Foltin had their big breakthrough in Macedonia, with their second album, Archimed, the only standard instrument on stage was the bass guitar. Everything else was exotic percussion instruments, tubes, whistles, combs... Furthermore, their language has been unusual; over the years, it has gradually evolved into Macedonian and English... Previously their songs used a "Foltin language", a phonetic mimicry of different languages without semantic meaning.

Strongly rooted in the theatre and performance scene, Foltin have recently done the music for several hit plays, including the young director Martin Kocovski's masterful adaptation of Bertolt Brecht's Drums in the Night.

They also composed the music for the hit documentary, Cash and Marry, of Macedonian director Atanas Georgiev. The film tells the story of migrants trying to secure a visa to go abroad through marriage.

In addition, they have been continuously performing live. Recent tours included France, Germany, and southeast Europe. Next, they will perform in Lebanon. If they maintain their current pace, their tours should cover much of Europe. Some critics say their completely unusual performance should not be missed.

Singer Branko Nikolov, an animated performer on stage, turns into a quiet and pleasant conversationalist. He recently talked to Osservatorio sui Balcani e Caucaso in Kumanovo, 50 kilometers away from Skopje, after a crowded Foltin's performance.

Who influenced your music? What music did you grow up with?

It is difficult to say, the influence is not always musical. For example, the band's name comes from literature, from the name of Karel Capek's last, unfinished novel, Composer Foltin.

In musical terms, I have often been inspired by stage performances, by innovation; if I may call it wittiness.... it is difficult to point to names. I think that what Bjork did in the past has influenced me, or, for example, Tom Waits, or let's say Johnny Cash.

The early Cash, or his later work?

Let's say I had been intrigued by what he did with Depeche Mode's Personal Jesus smile...but often, in most cases I would not be able to point to the exact source of inspiration. For example, music in the movies has occasionally had the power to move me tremendously.

Many have been trying to define your music. It has become a kind of a cliché that your music is difficult to define. Can you help this collective effort?

Yes, that is true. There have been many different attempts at definition. What we say is that we do pseudo-emigrant cabaret or that we play music for "dry, nervous fingers"...People have tried to place us all over the board. We are fine with this. They have said we are disco, ethno-punk, psychedelic trance, alter electro-pop... you name it. Could be that it is difficult. We like the term "pseudo-emigrant cabaret". It is a sort of a smallest common denominator of what we do...

And yet you have changed a lot, let's say from Archimed which made you famous back in 2000, to your latest two albums. I first saw you performing Archimed. You practically did not have conventional instruments on stage, except the bass. Do you feel you have become more, so-called mainstream over the years?

True, we have been changing. However, overall, we have remained sincere in our work. I mean, we still use those theatrical instruments. However, we do not have such a conscious attitude to this...the albums happen ...afterwards we do not even remember them so specifically. The songs are changing the same way we do.

Can you do the cabaret at large stadiums then?

Technically, it is possible. We have played large open spaces. However, we prefer smaller, intimate places. Three or five hundred people, or let's say up to a thousand; but not more. We do not especially enjoy playing for passersby. We want to play for audiences that know why they are there. Then we can really exchange, bond...

You do play a lot, for a Macedonian band... You do not get tired?

We perhaps play a lot for a band that does its own material, that does not play covers...We like playing live. It is what gives us energy; it keeps us alive. However, we do get tired of course. And we have to choose where and when we play, and we have to turn offers down...I don't know; over the last year we did around 80 concerts, something like this. We definitely like it. Some of our albums were also recorded live.

Do you have a concert that was special to you?

I cannot make such a pick. Sometimes it can be great because we feel ecstatic on the stage; for example, we had such a gig recently in the region. Other times, the audience excitement makes a great concert...but I would not be able to single out one event.

You have been doing a lot of music for theatre, how does this fit in your future plans?

How did you come about? Was it first Foltin and then you started also doing music for theatre, or was it the other way around?

We started as a group of people interested in performance. Some of the people in the group did not even have musical background. We made our own instruments, used the so-called ready-made instruments...and rather spontaneously we blended with theatre.

I read comments, reviews of you work, preparing for this talk. Somebody had said they could not believe a band like this could come up from Macedonia?

Well, that is somebody who doesn't know much about Macedonia smile. It's a small country but full of surprises.

People think that since you are so unconventional as a band, you also must be eccentric as individuals. Are you? Do you vote? Get passionate about football?

I cannot say about the others. I myself am timid, and I can get very passionate about football. I almost had a heart attack over it once smile.

Going up on stage is a different thing. You must feel special to be able to tell something to all those people who have come to see you...and I do feel this way when I am on stage performing....it is a very special feeling. Nothing like it!